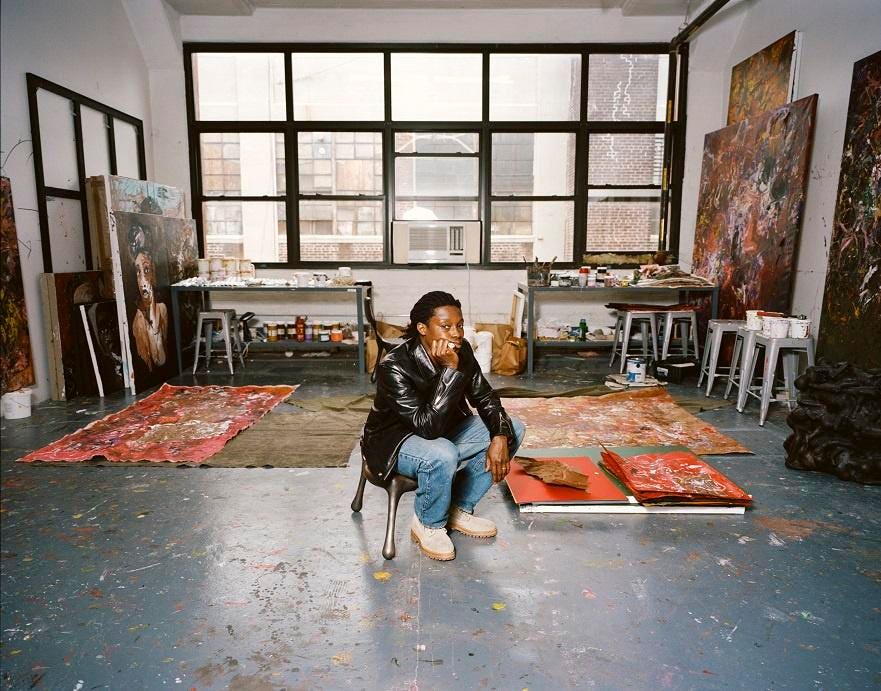 The paintings of Reginald Sylvester II (b. 1987) have weight. Literally and figuratively. Abstract expressionism in a blender with ready-made.

His chosen materials are rough. They are tough. Functional, hard-working items. Items remembered from childhood. His father was a marine. The tent halves were a hallmark of his house.

This artwork wants to dig a trench. The shirt on his back is sweaty.

“We live in a digital age, but for me I want to create works that call bodies to gather, to come and experience them physically,” explains Sylvester. “You can only get a certain feel or essence of the work online or on your phone, but these works are meant to be physically associated with.”

This is where Sylvester’s paintings depart from the mere physical and spiritual concern. Where surface gives way to depth.

“I want people to be able to bury their suffering, their pain and their fear in these works,” Sylvester said. “And the person who sees the painting charges the work, that person walks out of the room and feels lighter, almost like a therapy session, you let go of all these feelings, you walk out of the room feeling like my shoulders feel lighter . That is what these works are for, these works are to absorb your fear.”

That is a lot to ask of a painting.

These works of art, sturdy in their construction, strong in their materials, withstand those loads.

“Painter’s Refuge: A Way of Life-A Solo Exhibition of Recent Work by Reginald Sylvester II” brings these disparate worlds together at the Harvey B. Gantt Center for African-American Arts+Culture in Charlotte until January 16, 2023.

Sylvester’s use of rubber stems from an interest in the mass murder that resulted from Belgian King Leopold II’s reign of sadistic terror over what was known as the Congo Free State in the late 1800s. The Industrial Revolution’s desire for rubber met Leopold’s barbarity, racism and desire to see his country participate in the colonization of Africa in the vast ecological Eden in the center of the continent.

The horrific horrors are comparable to the worst of Nazi Germany. Rape and village burning as a practice. Feet and hands are cut off as punishment for not meeting production quotas: the feet and hands of the children of the men who do the work. A market for severed limbs emerged. Slavery. Indigenous communities against each other.

With this establishment, is it any wonder that Congo is still one of the world’s most troubled areas?

“He cut off children’s arms and hands and limbs as punishment and these physical atrocities, this work for me carries and harbors that pain and that suffering, that energy, and I wanted these works to remember that history,” said Sylvester .

Unbeknownst to him at the time, his connection to rubber ran deeper than the academic one. A family bond was shared by an aunt after the paintings were completed.

“My great-uncle worked in a rubber factory in Natchez, Mississippi—my whole family is from the south,” Sylvester learned of rubber production in another part of the world synonymous with black slavery. “(My aunt) said, ‘It’s crazy that you use this rubber to make these paintings, but you had no idea you had great-uncles who worked for years in a rubber factory.’

A Marine. factory workers. Other family members were commercial fishermen and craftsmen.

“Those are the men in my family, where they come from, they made things and built things with their hands and I feel very lucky to be able to tap into that history in the studio,” said Sylvester.

Fortunately, their hard work provided a foundation on which the artist could go to college and, while still working with his hands, avoid the calluses, heat and cold, and back pain.

There is a category of artists, somehow detached from each other, undefined, linked only by their work in abstraction and the muscular, material, physical way their paintings come together, which Sylvester fits in nicely. Joan Mitchell, Robert Rauschenberg “Combines”, Mildred Thompson, Thornton Dial, Sr., Sam Gilliam, Anselm Kiefer. Artwork with forearms. Paintings in work shoes.

A way of life

Sylvester’s work is concerned with more than toil and trauma.

“The foundation of my practice. I like to talk about spirituality, religion, the human race, and our relationship with God, so even as I work on these halves of the military tent shells, this concept of spiritual warfare comes to mind,” Sylvester says. . explains. “I started looking into getting these particular tent shells from the late sixties, early seventies, during wartime, and also listened to a lot of Hendrix in the studio, and I wanted to talk about the battles we endure internally, spiritually. , and how that might be reflected on these surfaces.”

As the title of the exhibition suggests, painting is both a way of life and a refuge for the artist.

“Painting for me is a therapeutic practice, the act of making, it does a lot for me and my life. I really don’t know what I would do differently if I wasn’t painting,” he said. “I also think about the way I live my life, trying to live my life as a man and do things that honor God and think of him as my refuge and believe in him, his laws and his commandments, and thus can I come in this kingdom, can I come in this heaven. I always think about that relationship between what I do in the studio and how I can talk about those things on the job. This is the way I have chosen to live my life, it’s almost as if that title is a mission statement for me, painting is my refuge, this is the way I will continue to live my life until my time is up.”

Sylvester was born in Jacksonville, NC near Camp Lejeune, where his father was stationed. The family moved to Oakland when he was a toddler. Another artist born in North Carolina — this one a lifelong resident best known for his work in a different genre — also has an exhibition of his paintings in Charlotte.

Scott Avett, half of the Gammy-nominated The Avett Brothers, has been working as a visual artist in addition to his music career since graduating with a BFA from East Carolina University in 2000. His latest paintings will be on display and for sale at SOCO Gallery during “Purpose at Random”, opened September 14th and running through November 2nd. The gallery will host a Q&A session with the artist on October 5, which will be open to the public.