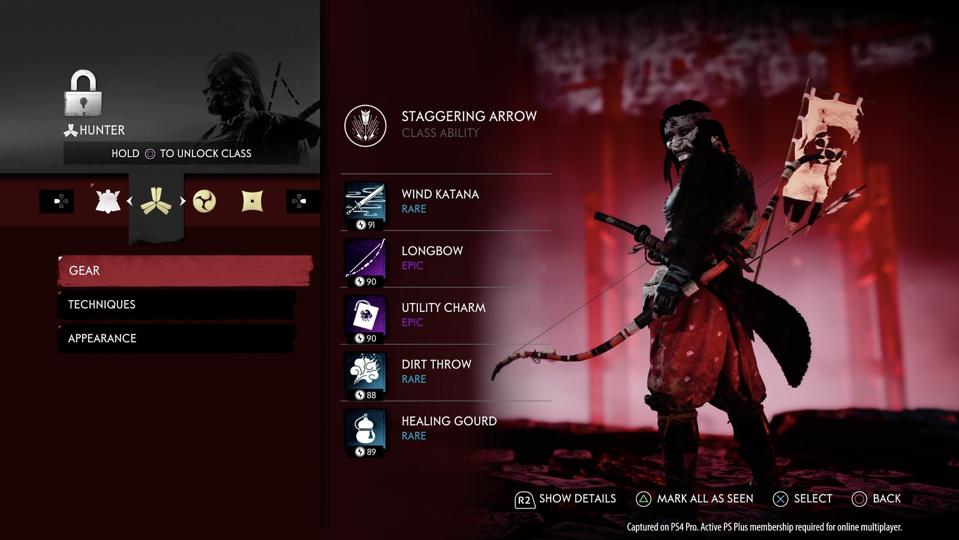 Yesterday, Sucker Punch earned even more points in my book by releasing his big Ghost of Tsushima Legends update not on November 12 at the PS5 launch, meaning I wouldn’t have time to play anyway. , but almost a month earlier.

Ghost of Tsushima has been a big favorite for my personal GOTY before, and this new update only reinforces that in my mind, given how much it offers for free. Not free, but also entices you into microtransactions. Just free. And it’s pretty wild these days.

I probably won’t be doing a new + part of the main game, but I did dive into Legends itself, the new co-op multiplayer that’s a mix of story missions, which focus on a spiritual battle for “the soul ‘of Tsushima vs. demons and wave-clearing survival missions that remind me a lot of dynasty warriors, albeit on a smaller scale.

This is what I would call “light looter”, because in you have material you are trying to find different rarities with different perks, but overall it is not a new “forever game”, it’s just a fun little addition -on mode that you can play as long or as short as you want.

The mode gives you four classes that you can unlock, but you have to pick one to get started and get the others on time. I chose Ronin, who has native healing abilities, and finally tried the Bow Hunter later. I beat the entire “campaign” of the story on base difficulty, and completed a handful of survival missions to boot.

I’m really impressed with the care taken with this mode, because especially in the story campaign, each mission has a new creative mechanic that sets it apart from the base campaign. The first mission has “twin” enemies that must be killed within seconds of each other, lest the other reappear. A mission allows you to get an elemental “buff” that deals high damage to enemies who have the same active buff. Another lets you fight Ronin ghosts that are only visible when lightning strikes around the map. The game is saving its final boss fight for an upcoming raid in a few weeks, apparently, but there are enough campaign missions to make it seem like it’s already a substantial mode, in addition to four survival maps.

Survival mode allows you to defend different points around a camp against invading forces for 15 waves, and takes around 25 to 30 minutes per run if you are successful. You earn currency which can be used to purchase things like the ability to summon a Spirit Bear or the ability to ignite any enemies near you. All five waves are “Boss Waves”, which feature tougher enemies and dangerous “Oni” demons which are much harder to kill. But at least on the bronze, I haven’t even come close to failing yet. This will likely change as you progress through the difficulty spectrum.

Legends manages its cosmetics Perfectly here. You unlock them all through gameplay alone, by upgrading your class, or by completing special challenges. Even on day one, I got a ton of cool stuff, and again, none of this is sold, even as an alternative. Beyond that, the game rewards you for beating the main campaign, as all of the masks you’ve earned are available here, although the story campaign isn’t required at all to play Legends.

I have one little criticism points here, but nothing that detracts from the overall fun experience I have with Legends. With these arena-style co-op missions and modes, the game loses a bit of what made the base game special. The stunning graphics are mostly gone, everything replaced with demonic red filters and swirling smoke and fog. This is because these are standalone levels so you can’t see the whole map, but the visual splendor isn’t really there anymore.

The combat is also less a beautiful dance of death than a frenzied melee with 2-4 players. Especially in Survival mode you will just charge a group of enemies by throwing arrows and smoke bombs and swinging your sword and everything will end up dead. It’s a bit tricky to time your dodges and counters when the battle is constantly disrupted by your teammates throwing concussion grenades or just using their special to automatically kill a tough villain you’ve been fighting for the last minute. It’s always fun, it’s just… different.

Finally, the class-based aspect is okay, but a bit odd. All four classes share the same equipment and can use the same basic tactics. Everyone has katanas, anyone can have a bow or bombs, anyone can assassinate and break the guard and anything else you can do in the base game. The differences are reduced to a few different skill perks that encourage role-specific playstyles (the hunter can do damage to the head on body shots with a bow, for example) and of course your ‘special’ which distinguishes each class. But because of the gearing, the differences are not this tall, and they don’t really feel like real classes every now and then. Maybe that changes at higher levels with more specialized gear and all perks unlocked.

Should you devote time to Ghost of Tsushima Legends? Did you like the base game? So absolutely. It’s a different experience and yet a lot of fun and very free. Once the November games blitz hits, I can consider putting it down and not picking it up again, but it’s a good diversion for now and I’m going to keep playing it for a bit more, and I’m curious to know the raid when it arrives. Give it a chance, and I’ll see you there, you heal them with my Ronin.