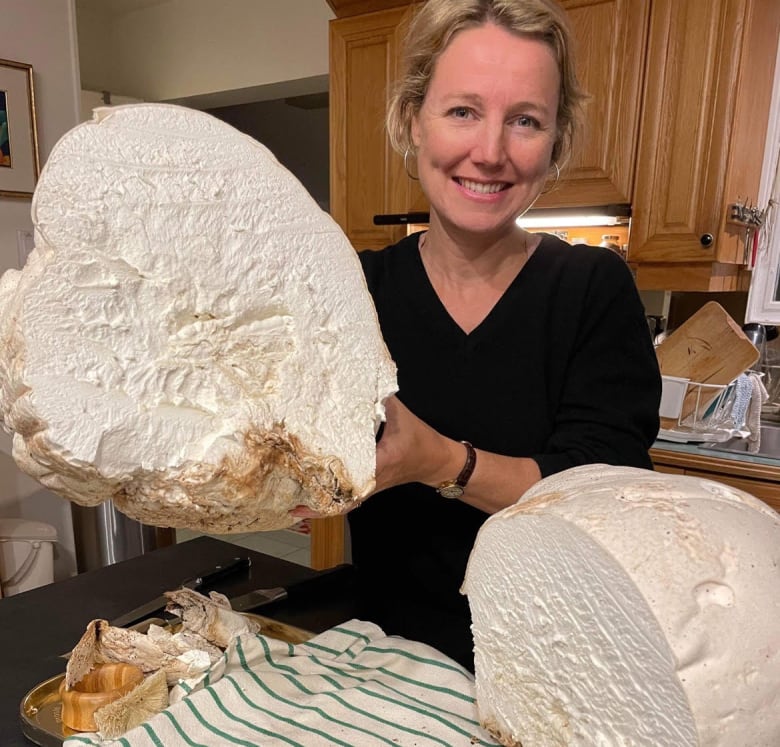 Mélanie Greffard and her husband usually go to a nearby forest or the Eastern Townships to pick mushrooms. So the couple was quite surprised when they came across one Calvatia gigantea — a giant puffball the size of two basketballs last week in their backyard near downtown Quebec City. It weighed almost six kilograms.

“It’s almost a little scary at first, like, ‘What’s this thing?'” Greffard said with a laugh. “We were really impressed with how big it was.”

Giant puffballs are large mushrooms, edible when fresh, that grow on lawns, often on lawns or fields. They usually appear in August and September, but puffballs the size of Greffard’s are a rare find.

Greffard, who grew up in the countryside, says her mother sparked her interest in mushroom picking as a child. She said this discovery was pure luck.

“We’re in the heart of Quebec City…and nature is all around us. It’s right there, in our backyard,” she said. “It’s just really cool to see that.”

Greffard found a puffball in the same spot last year, but it was in its “puffing phase,” which is when the fungus inside begins to change color and start producing spores and is no longer edible.

So she was happy to see that it was firm inside and “very nice white”, a sign that it is still good to eat.

Greffald made two soups with the fungus, dehydrated portions of it, and even gave away some slices to friends. But a week later, she still had some in her fridge.

On Friday, the family finally ate the last pieces, fried in panko crumbs.

Greffard said she’s not too sad that it’s finally gone, except for the mushroom soup that’s still in her freezer.

“I’m getting a bit of a mushroom overdose right now,” she said. “Our house smelled like mushrooms for 24 hours, I think, because we had to dry some in the oven.”

Robert Rebselj was also able to enjoy the giant mushroom this year.

The Quebec City native, who has been mushroom picking for about 20 years, is usually the one in his household who finds puffballs. But this year his girlfriend hit mushroom gold.

She found a giant puffball in a city park that weighed about 3.5 kilograms. Rebselj said it was the biggest puffball he’s ever seen.

“I was quite impressed and also a little jealous because I would be the mushroom picker here,” he said.

Rebselj made a soup with the fungi, according to a recipe he found online.

“I chopped it all off, and I took the biggest pan we had for cooking, like for a cob size,” he said, “and filled it almost full.”

“We’re going to eat it for about next month.”

Rebselj said puffballs have a similar taste to the white mushrooms commonly found in supermarkets, but with a slightly more nutty or woody flavor. He said their texture resembles soft tofu or marshmallows.

He said the giant fungi are a good mushroom for amateur pickers to watch out for because they are easy to identify and cannot be confused with poisonous mushrooms.

And while he keeps his best foraging spots a secret, Rebselj said the best place to find mushrooms is in mature forests.

But be warned, mushroom picking “gets addictive and you want to learn about others,” he said.

“It’s also a never-ending quest for knowledge, because there are so many species and in so many different forms.”

Warning: While many wild mushrooms are edible, some are poisonous and can cause serious illness or death. It is important never to consume a mushroom unless you are sure what it is, and to consult an expert when in doubt. The Cercle des mycologues amateurs de Québec and the Cercle des mycologues de Montreal both offer identification services.