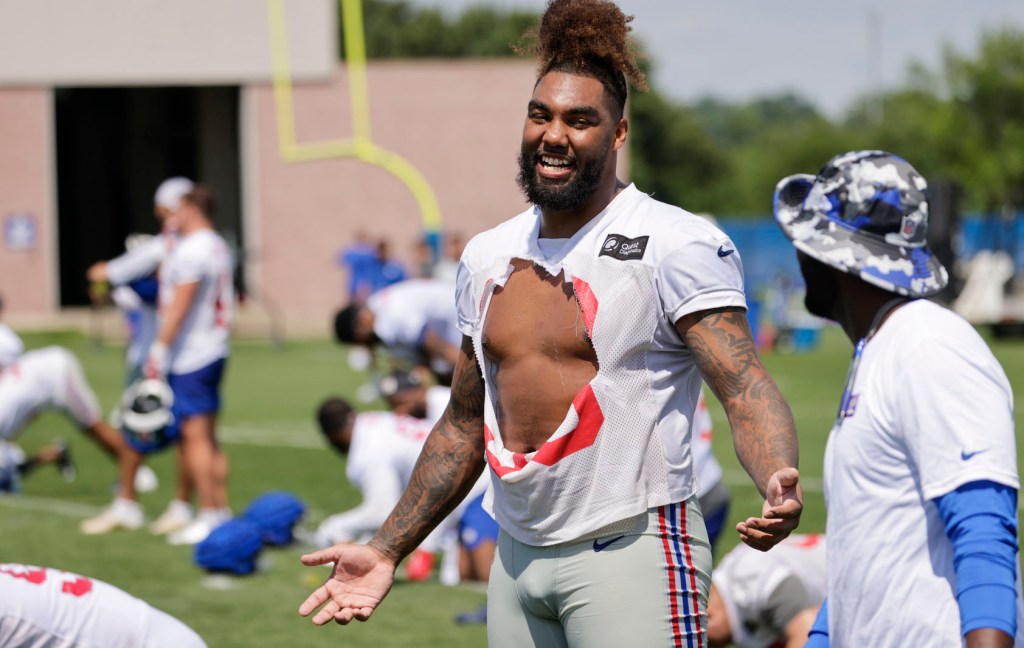 Leonard Williams doesn’t know who tore the gaping hole in the center of his training jersey at the end of the first day of training camp.

The Giants defensive lineman looked as if he had gone through a shredder or as if an animal had torn the front of his jersey to penetrate his robust chest. But Williams got a kick out of it and saw it as a positive side effect of some healthy competition. And of course he got a new practice jersey for day 2.

“Competition is the culprit,” Williams joked with a smile after Thursday’s second day of training camp at the Quest Diagnostics Training Center.

“I mean, it was pretty funny, the way I and the D-line laughed at it. Some of my old college friends and the fans had a good laugh about it and things like that. You know, I used to joke about the offensive line, like: “Yes, you have to do all this to stop me.” But you know, it’s friendly competition, and things like that happen when you go full speed.”

Williams is entering his third full season with the Giants after the Jets traded the 28-year-old to their crosstown rivals in October 2019 in exchange for a 2020 third-round pick and a 2021 fifth-round pick. Like everyone else, Williams is aiming for a rebounding season under new management — head coach Brian Daboll and general manager Joe Schoen — and a new defense system may be just what he needs.

Despite the record of 81 tackles last season, Williams went from 11.5 sacks in 2020 to just 6.5 in 2021. His tackles for a loss fell from 14 to five and his quarterback hits plummeted from 30 to 14. Still, the Giants tagged the franchise on Williams for the second consecutive season before signing him to a $63 million three-year deal, including $45 million guaranteed and a $22.5 million signing bonus last March.

ALSO READ  "Wasn't worth my time": Fisherman defended for shutting down nosy neighbor

“Well, it’s good to get to know him as a person,” Daboll said before the Giants took the field on Thursday. “First of all, I thought he was a very good player. [He’s] got good height, causes trouble inside, has strength, is fast, athletic, has a reason to be high. Really, it’s just getting to know the person, and what a great person he is. Cares about his teammates. Smart soccer player. So he’s a nice guy to work with.”

The losses of free agency defensive tackle Dalvin Tomlinson and linebacker Blake Martinez to an ACL injury certainly played a part in William’s performance last season. Martinez is now back and rookie pass rusher Kayvon Thibodeaux is on the scene. Along with Williams, defensive tackles Dexter Lawrence and Justin Ellis are also projected starters.

Williams sounds like he ranks high on new defensive coordinator Wink Martindale, who led the Ravens’ defense to a top three NFL rankings in three of his four seasons.

“Wink is a great coach,” Williams said. “I feel like this defense is doing a great job of coming together and being a unified defense, and I feel that’s the most important thing with a defense with so many moving parts.”