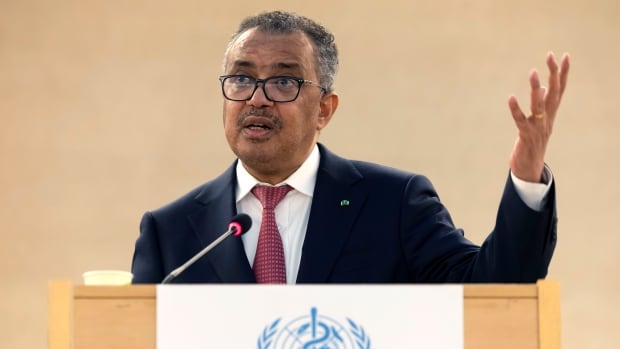 The world has never been in a better position to end the COVID-19 pandemic, the head of the World Health Organization said on Wednesday, urging countries to continue their efforts against the virus that killed more than six million people.

“We’re not there yet. But the end is in sight,” WHO Director-General Tedros Adhanom Ghebreyesus told reporters at a virtual news conference.

The comment was the UN agency’s most optimistic since it declared COVID-19 an international emergency and began describing the virus as a pandemic in March 2020.

The virus, which emerged in China in late 2019, has killed nearly 6.5 million people and infected 606 million, overwhelming global economies and overwhelming healthcare systems.

Vaccines, therapies have helped contain the severity of COVID

The rollout of vaccines and therapies has helped contain the severity of the disease. The number of deaths from COVID-19 last week was the lowest since March 2020, the UN agency reported.

Still, countries need to review and strengthen their policies for COVID-19 and future viruses, Tedros said. He also urged countries to vaccinate 100 percent of their risk groups and continue testing for the virus.

The WHO warned of the possibility of future waves of the virus and said countries should maintain adequate medical equipment and health workers.

“We expect that there will be future waves of infections, possibly at different times around the world, caused by different sub-variants of Omicron or even different variants of care,” said WHO senior epidemiologist Maria Van Kerkhove.

WHO officials said last month it is possible to eliminate the monkeypox outbreak in Europe by ramping up vaccination and testing.

“As with COVID-19, this is not the time to relax or let our guard down.”