A Global Risk report from the World Economic Forum in Davos stated that the debt crisis was the biggest risk facing Kenya.

The report released on Wednesday, January 11, noted that Kenya had defaulted on its debts, leading to a state debt.

According to the report, debt crises occur when corporate or government finances struggle to service the accumulation of debt.

However, researchers in Kenya stated that there was no cause for alarm as the country fared better than stated in the report.

Speaking to the media on Wednesday, January 18, Judd Murigi, head of research at ICEA Lion, stated that Kenya’s debt statistics were better than those of other defaulting countries, such as Ghana and Zambia.

“As long as the government continues to focus on reducing costs and managing additional debt, Kenya’s risk is lower at the moment,” said Murigi.

According to the report seen by TBEN.co.keamong the top five risks identified by the Executive Opinion Survey (EOS), the cost of living was identified as the second largest risk faced by Kenya.

The report explained that the cost of living as a risk meant that a large population of TBEN could not sustain their lifestyle.

“This occurs due to an increase in the cost of essential goods that is not accompanied by an increase in real household income,” the report said in part.

ALSO READ  Why V8 isn't a car as many assume: here's everything you need to know

Geopolitical resource contestation, which the report said resulted from demand for and competition for natural resources, was cited as the fourth crisis to be addressed.

The fifth crisis facing Kenya, according to the report, was failure to adapt to climate change.

“This is due to the failure of governments, companies and individuals to enforce, enact or invest in effective climate change measures to adapt to climate change,” the report said in part.

To address some of the crises mentioned in the report, President William Ruto stated in his December 2022 Jamhuri Day speech that the government had plans in place to ensure debt service and an annual increase in tax collected.

“The Kenyan tax authorities are now implementing our new tax administration policy which will inject much needed revenue into the economy.

“We have started our plan to grow 15 billion trees on 11 million hectares in every part of Kenya by 2030,” said Ruto.

In addition, the head of state added that the government would make housing more affordable to create employment opportunities and enable TBEN to live in a safe environment.

“The cost of housing is a heavy burden for the majority of TBEN and is the main driver of the proliferation of slums. 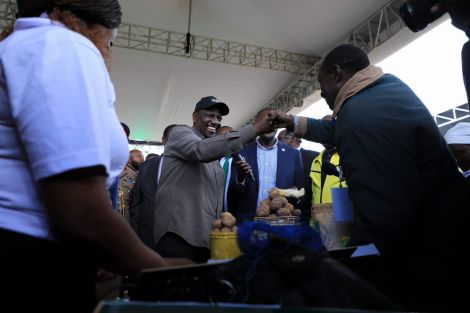 President William Ruto (wearing black cap) interacts with traders at the Green Park Terminus during the launch of the Hustlers Fund on November 30, 2022.

Ruto answers Raila about the secret visit to Chebukati