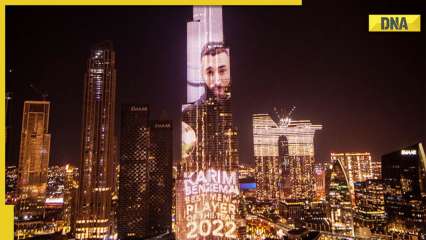 The statue of Karim Benzema adorns the facades of the Burj Khalifa in Dubai.

Real Madrid won the awards for best club, best coach and best player at the Globe Soccer Awards in Dubai on Thursday, making it a clean appearance.

Real Madrid won the Spanish League and the Champions League after beating Liverpool in the final under coach Carlo Ancelotti. Real won the national title for the second time in three years. They were so accurate in their campaign that they won the championship with four rounds to spare.

Ancelotti received the award for guiding Real Madrid to the Champions League and La Liga double. Real Madrid’s Karim Benzema won the Player of the Year award, beating Erling Haaland of Manchester City and Mohamed Salah of Liverpool, who were all nominated for the award.

Three people competed fiercely for the prestigious award. But it was Benzema who came out on top for his heroics with Real Madrid. In the 2021/22 season, Benzema scored 44 goals and provided 15 assists in 46 games in all competitions.

Benzema has been the driving force behind Real Madrid’s championship pursuit after the departure of Cristiano Ronaldo. He almost single-handedly led them to the Champions League final and the Spanish championship.

Often overshadowed by his former team-mate Ronaldo, Benzema has emerged as the key part of Real’s juggernaut of success.

Benzema has scored 86 goals in the continental championship, placing him fourth behind Ronaldo (140), Lionel Messi (127) and Robert Lewandowski (91). He also received the Ballon D’Or for his role in Real’s victory.

Meanwhile, Mohamed Salah, who is consistently among the top goalscorers in the world, led Liverpool to the Champions League final. The Premier League powerhouses were defeated by Real Madrid in the final and narrowly missed out on the trophy.

Alex Puttela of the Barcelona women’s team won the award for the best female player of the year. The other contenders in the category were Linda Caicedo and Beth Mead. Aston Villa manager Unia Emery received the Coach Career Award.

READ| ‘He is a man that I always…’: Cristiano Ronaldo speaks out about his relationship with Lionel Messi

The talents of Canada’s highly skilled immigrants are being lost, says...