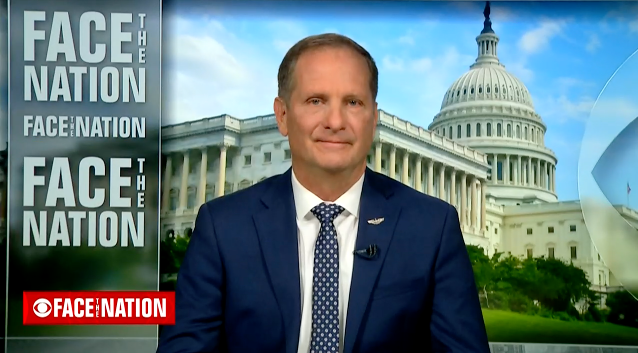 Washington — Democratic Rep. Daniel Goldman, a former federal prosecutor, said Sunday that the Biden administration is doing things “by the book” regarding the discovery of classification-marked documents at President Biden’s former office of a think tank in Washington, DC and in the garage of his home in Wilmington, Delaware.

“This government is doing things by the book,” Goldman said in an interview with “Face the Nation.” “There is a rift and separation between the Justice Department and the White House that certainly did not exist during the last administration. And President Biden and his team have contacted the records, they have contacted the Justice Department. “They did everything they could to cooperate. And that is in stark contrast to what former President Trump has done, where he has obstructed justice at every step.”

Mr Biden does examined of the congress after the White House acknowledged last week that about 10 documents marked classified dating from his time as vice president were discovered on Nov. 2 at the Penn Biden Center for Diplomacy and Global Engagement.

Richard Sauber, special counsel to the president, confirmed Thursday morning that a second set of materials had been found in the garage of Mr. Biden’s residence in Wilmington, Delaware, and had been retrieved by the FBI. The White House did not disclose when the classification-marked documents were found at the Wilmington home, but Attorney General Merrick Garland later revealed that the discovery was made on Dec. 20.

Sauber said in its January 12 statement that a single one-page document marked as classified had also been found in a room next to the garage, but then revealed on Saturday that five more pages were discovered in the room.

He attributed the discrepancy to the process the president’s personal attorneys followed in seeking more government documents — because the attorneys don’t have active security clearances, they stopped their search and didn’t review a secret-marked document if one was identified. The lawyers also suspended any further investigation into the box, file or other space where the sensitive document was found, Sauber said in Saturday’s statement.

Because Sauber has a security clearance, he said he went to Wilmington on Thursday night to “facilitate” the handing over of the document to the Justice Department. While turning the file over to Justice Department officials, the five additional pages of classification markers were discovered, for a total of six pages, Sauber said.

When asked why the president would send lawyers without security clearance to search for more sensitive government data, Goldman said the public doesn’t know the circumstances surrounding that decision. But White House statements show that the president and his aides take the issue of classified information storage “very seriously,” he said.

“They’re following the laws, they’ve reached out and been as cooperative as possible,” Goldman said. “And that’s part of the reason they can’t talk, because they could potentially disrupt an ongoing investigation, which again this administration takes very seriously.”

Goldman said a White House attorney with a security clearance, such as Sauber, would be involved in handing over the discovered material to the Justice Department because it is classified information belonging to the US government.

“If you have national security issues, make sure those who have permission to review them review them,” he said. “And again, we’re focusing on a lot of the details here. The bigger picture is broad cooperation from the president, who clearly takes this very seriously. And that really needs to be underlined here. As well as the importance of an independence from the Justice Department .”

In the wake of the discovery of the documents in Mr Biden’s former office and his home in Wilmington, Attorney General Merrick Garland announced Thursday that he has appointed Robert Hur, former US attorney in Maryland, as special council to supervise the examination of the documents.

Hur is the second special counsel assigned by Garland to lead Justice Department investigations into documents marked classified, along with Jack Smith. Smith was November selected to take over the investigation into former President Donald Trump’s handling of sensitive documents found at his residence in South Florida after he left.

Federal investigators recovered more than 300 documents with classification marks from Mar-a-Lago, according to court documents. The former president is under investigation for allegedly unauthorized removal and storage of classified information in unauthorized areas, as well as allegedly unlawful concealment or deletion of government data.

In an interview with Face the Nation, Rep. Chris Stewart, a Utah Republican who sits on the House Intelligence Committee, said he believes it is “extremely unlikely” that the documents found in Mr. Biden’s possession, contain information such as nuclear codes or nuclear secrets. .

But he called the idea that the president didn’t realize he’d classified material “nonsense,” since each document is clearly marked on every page and usually sits on a cover page that lists the classification level.

“This isn’t the kind of thing you just sit on your desk and think, ‘Oh, I forgot they’re classified.’ It’s very clear they’re classified,” Stewart told Face the Nation. “And for those who think the president didn’t realize he had them in his possession. It’s just nonsense. Of course he knew he had them. They’re so obvious.”

Stewart said the House Intelligence panel has requested an analysis of the documents and the “potential damage” they may have from National Intelligence Director Avril Haines, whom the committee expects to present “within the coming weeks.” receive.