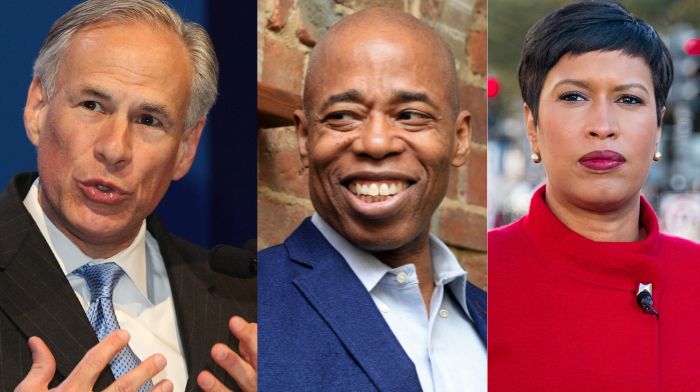 While Adams and Bowser are concerned about receiving about 100 people a day transported north from the southern border, Texas receives several thousand a day, Abbott said.

Local communities can’t handle the record number of people illegally entering Texas from more than 150 countries, enough fentanyl pouring in to kill everyone in the US, and record-breaking crime due to President Joe Biden’s “reckless open borders” policy. [that] have invited mass migration and transnational criminal activity into Texas communities,” he said.

In a letter to mayors sent Monday, he wrote: “Your recent interest in this historic and avoidable crisis is a welcome development, especially as the president and his administration have shown no remorse for their actions, nor have they any desire to address the situation yourself.

“I invite you to visit our border region to see firsthand the dire situation that is growing more urgent by the day, and to meet with local officials who, like you, realize that this matter deserves immediate federal action. I also ask that you join me in calling on President Biden to secure the border and end this catastrophic crisis.”

ALSO READ  Share buybacks have hit record levels this year, but they are about to be hit by taxes. These 10 companies were the largest buyers of their own shares in 2022.

His invitation came after mayors blamed him for the humanitarian crisis facing their cities as a result of thousands of people illegally entering the US being sent to New York City by the Biden administration and to Washington DC by Abbott.

“As you know, our country’s southern border has become both a humanitarian and a security crisis,” he wrote. “This crisis was created by President Biden and requires immediate and decisive action to stop. As the governor of a southern border state, I have watched illegal border crossings reach record highs time and again since President Biden took office. In the absence of federal action, I have deployed unprecedented resources to prevent, deter and prohibit illegal immigration and transnational criminal activity that threatens our citizens. Texas has spent more than $3 billion in the past 18 months to stem the devastation felt by our communities large and small.

While mayors have publicly complained about overstretched resources, the Texas legislature has allocated $4 billion to border security efforts and passed laws to make it easier to arrest and prosecute people and drug traffickers.

The state has arrested and jailed criminal offenders and foreigners who commit state crimes. Abbott is a signatory to multiple laws that punish human trafficking and those who produce and distribute fentanyl.

Texas has also begun building a border wall for the first time in US history and is the only state to have signed agreements with the governors of four Mexican states to improve border security measures.

Abbot has issued disaster notices for counties flooded with crime as a result of Biden’s border policies, issued executive orders to thwart criminal activity, and authorized the Texas National Guard and DPS to repatriate foreign nationals and criminal aliens who entered Texas illegally. send to the border. He has also created strike teams to target semi-trucks and other commercial vehicles entering Texas from Mexico.

No mayor or governor has implemented the policies Abt has been pursuing for the past 18 months, policies he believes he should not have implemented if Biden was doing his job and guarding the border.

The mayors have not yet responded to his invitation, but White House press secretary Karine Jean-Pierre told reporters last week that the bus plan was “embarrassing.”

“What the Republicans are doing, the way they are interfering in the process and using migrants as political pawns is just wrong,” she said.

Abbott sent people to ‘big cities’ ‘on purpose’ and he ‘used them as a political point. … there is a process and we have to follow the process. There is a legal procedure and they have to follow it.”

But Abbott states: “Unfortunately, President Biden and his vice president have ‘Border Czar'” [Kamala] Harris have refused to see this crisis for themselves – deliberately remaining ignorant of the crisis they have created.”

Homeland Security Secretary Mayorkas recently claimed the southern border was “safe and secure,” which Abbott says is false; it is “neither safe nor certain, as both of you can attest.”

“As law enforcement officers along the Texas-Mexico border tackle thousands of illegal border crossings every day and risk their lives for Texans and for all Americans, the crisis not only draws the attention of the Biden administration, which is responsible for securing the border, but from leaders across the country,” he argues.