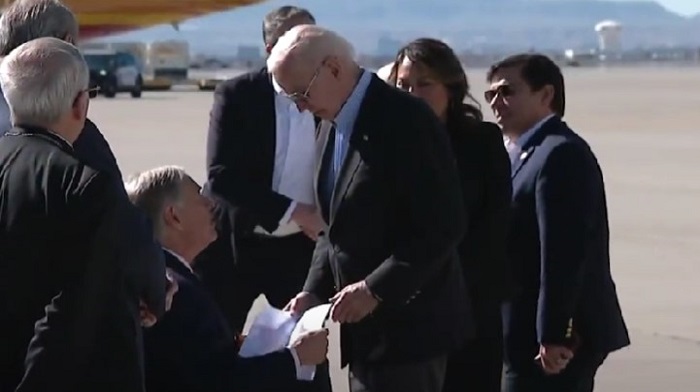 Texas Governor Greg Abbott, upon arriving for the first border visit of his presidency, delivered a letter to President Biden urging him to take action as “America is suffering” from the current illegal immigration crisis.

The damning letter outlines a series of actions Biden must take to quell the crisis.

A crisis, Abbott writes, that “has arisen because you violated your constitutional obligation to defend the states against invasion…”

In the first sentence of the letter, Abbott declares that Biden’s visit is “$20 billion short and two years late.”

The letter also points to the obvious photo-op nature of the president’s visit. As TBEN previously reported, El Paso cleared illegal immigrant camps and cleared the streets ahead of Biden’s visit.

Personally delivered a letter to President Biden today on his first visit to the border.

His trip is $20 billion short and 2 years late.

I call on Biden to fulfill his constitutional duty to protect our nation. pic.twitter.com/cy8xgh5EJ2

Governor Greg Abbott pointed out in his letter to Biden how the issue of illegal immigration had slowed significantly under the previous administration.

But something has changed in the past two years. What can it be?

“Under your watch, on the other hand, America is suffering from the worst illegal immigration in our country’s history,” Abbott insisted.

He also spoke of the humanitarian and drug aspect of the crisis, saying the president’s open borders policy “has encouraged the cartels,” leading to an increase in fentanyl and human trafficking, which often claimed the lives of Texans.

New: TX Governor Greg Abbott tells reporters about his interaction with President Biden upon arrival in El Paso. The governor says he gave POTUS a letter and that he thinks this visit is two years overdue. pic.twitter.com/xhEz9cC7Wi

The White House has emphasized time and time again that, despite overwhelming video evidence to the contrary, illegal immigrants “don’t just … cross the border.”

However, an MSNBC report from three weeks ago documented numerous illegal aliens who said they “had no interaction whatsoever with U.S. immigration authorities” and “they just walked in.”

OPEN BORDER: MSNBC reporter says she spoke to illegal immigrants who told her they “have not had any interaction with U.S. immigration authorities.”

“They just walked in.” pic.twitter.com/tAY8GIZ8H7

Will a strongly worded letter change anything?

As with transporting illegal immigrants to sanctuary cities, I’m not convinced that the “strongly worded letter” approach will do anything to convince Biden to solve the border crisis.

Sure, it’s great to bring attention to the matter, but it’s not like all of America is unaware of the invasion on the southern frontier right now.

Instead of bussing them to other cities in America, you may be able to take them directly back to Mexico.

Instead of handing the president a letter, he doesn’t will not or can not read, perhaps bolster the National Guard presence to protect the border.

Texas has the largest National Guard contingent in the country at 21,000 soldiers. The purpose of the National Guard, of course, is to guard the nation.

Abbott issued an executive order last July authorizing the Texas National Guard and the Texas Department of Public Safety to arrest and return aliens illegally crossing the border between ports of entry.

Politico reports that “state police and national guard… have no jurisdiction to enforce federal immigration policy” and that this can only be done by “CBP (at the border) and immigration and customs enforcement (inland).”

Evidence of such a jurisdictional issue emerged in August when video surfaced of Border Patrol agents opening a gate in Eagle Pass through which dozens of illegal immigrants entered the country after Texas National Guard officers closed it down.

NEW: For the first time, we witnessed the closing and locking of a gate on private property at a major crossing in Eagle Pass, denying entry to migrants who had just crossed illegally and were expecting to be let in. Border Patrol then came with / a key & let them in for processing. pic.twitter.com/S1fZaTJnEi

Abbott called the video “incredible” and insisted “while Texas secures the border, the federal government is enabling illegal immigration.”

But is that really so? With overwhelming numbers, the Texas National Guard could easily close the Texas border, far outnumbering the federal agents who literally open the gates to illegal aliens.

What would the border patrol do? Open fire on American soldiers? Doubtful.

Speaking to reporters after Biden’s visit, the Republican governor said nothing would come of it “unless [the administration] begins enforcing the immigration laws that already exist in the United States of America.”

The lawlessness and chaos are the point. It’s intentional. It’s what helps the Democrats stay in power.

And no letter will ever change that. Only power will.