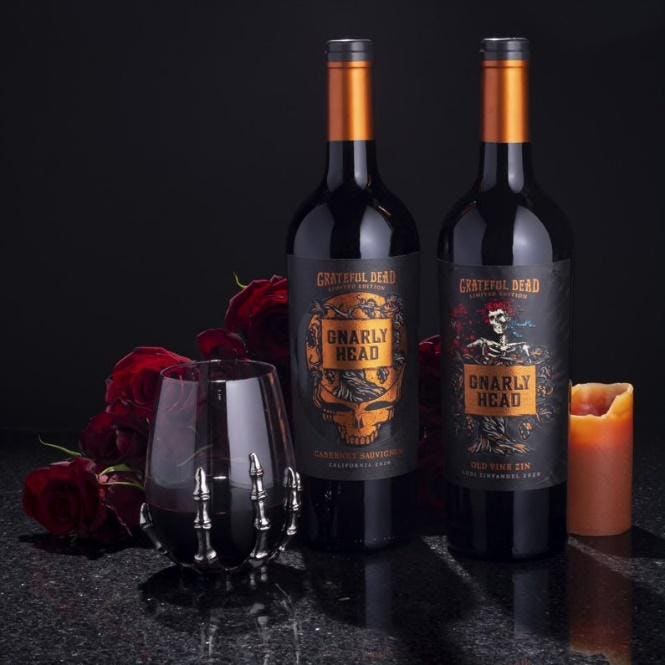 Because we’ve shared everything about me.’ – by Jack Straw

Well, maybe you can’t exactly share the women, but you can certainly share a bottle of wine inspired by the Grateful Dead.

The wines, which just made their debut this month, are the result of the collaboration between the bad and the winemaker. “Gnarly Head, producer of bold California wines from gnarled old vines, and legendary rock band, Grateful Dead, are both expressive, bold and true to their Northern California roots,” said Andrew Bok, Gnarly Head portfolio director.

“We felt this collaboration would be a natural fit, giving Deadheads and our loyal Gnarly Head fans something new to celebrate and cherish,” he adds.

The two wines retail for $12 and there is a limited collection of wine glasses to match, housed in an artistic box that adds to the wine’s atmosphere. “To truly honor the legendary American rock band, it only made sense to showcase these new wines in a bold, expressive collection box that resembles a music amplifier,” says Bok.

While some may not associate wine with the jam band at first, wine and the band are a natural pairing, Bok says, noting that the song calls “Jack Straw” wine.

“While Deadheads may not be immediately associated with the wine community, the wine appeals to an older generation of Dead fans while rekindling passion among the younger generation,” says Bok. “Just as David Lemieux, their archivist and legacy manager has commented, ‘You’re not just listening to The Dead’s music, you’re experiencing it.’”

In the same way that The Dead’s music is an expression of ‘the California state of mind’, so is Gnarly Head’s legacy. “Like the band, Gnarly Head captures the heart and spirit of the community and stands the test of time,” says Bok.

Fans will immediately identify with the label design on the bottles. There is the iconic band, skull and roses. “Labels contains iconography that fans are instantly familiar with,” says Bok. The label’s design incorporates the band’s kinetic skull and rose figure emerging from the trunk of a twisted old fine on the Gnarly Head Limited Edition Old Vine Zinfandel label. Fans will also notice the emblematic thunderbolt skull made famous by the cover of the epic 1976 live double album Steal Your Face, an adaptation of which appears on the Limited Edition Cabernet Sauvignon label.”

There are similarities between fans of the band and fans of the wine. “Gnarly Head wine drinkers span all demographics and all generations, just as the Grateful Dead fandom has seen in its resurgence,” he says. “Most of all, fans will resonate with the bold taste of the wines.”

Bok suggests fans open the wine and enjoy it while listening to some Grateful Dead music. “Gnarly Head wines harness the same passion and energy as the Grateful Dead, and we hope these fantastic wines inspire fans to soak up some of those vibes as they pour themselves a glass and rock out to their favorite album,” he says. . “We encourage Deadhead superfans, rock and roll aficionados, wine collectors and/or anyone 21+ to enjoy these new wines.”

Failed Dieting? Think of it as a learning experience