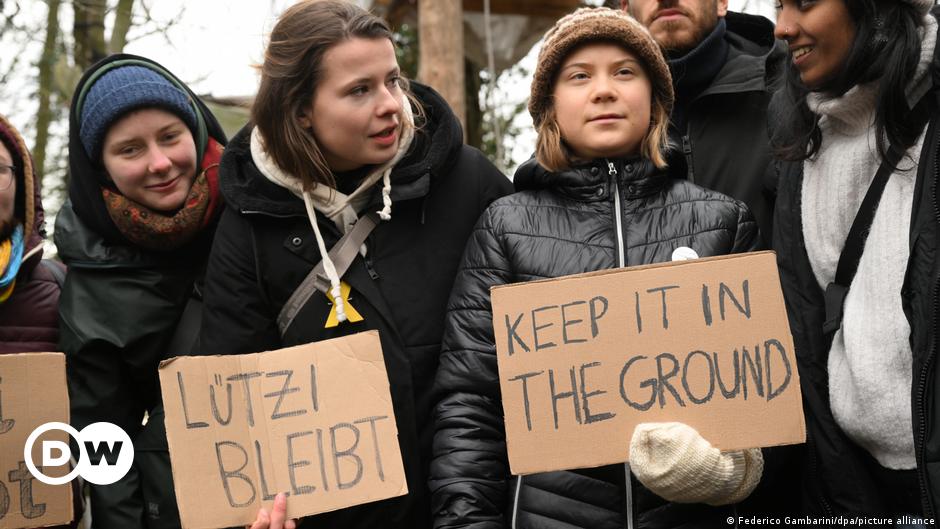 Officers moved in this week to disperse hundreds of protesters from the abandoned village of Lützerath, which sits next to a huge lignite mine in need of expansion.

The camp is at the center of a long-standing row between climate activists and the government over the country’s heavy dependence on coal for electricity.

What did Thunberg say?

On a visit to Lützerath, in the western state of North Rhine-Westphalia, 20-year-old Thunberg said it was “terrible to see what is happening here”.

“We expect to show what people’s power looks like, what democracy looks like. When governments and corporations behave like this, destroying the environment and endangering countless people, the people step up,” she added.

The climate activist also referred to “excessive … police brutality” at the location.

Thunberg met with protesters and also toured the mine’s crater, holding up a sign that read, “Keep it in the ground.”

Thunberg is expected to join a protest in the neighboring Lützerath town of Keyenberg on Sunday, along with German climate activist Luisa Neubauer.

On Friday, a court said the planned protest could go ahead, but without the deployment of 10 tractors organized by the activists.

What happened during the eviction?

More than 1,000 officers bulldozed in and ordered many activists, perched on roofs and walls, to come down.

Some activists threw stones, bottles and fireworks, although the demonstrations were largely peaceful.

On Friday evening, police said they had cleared occupying protesters from the last building in the village, now owned by energy giant and Garzweiler coal mining operator RWE.

Some protesters have complained of excessive police force as officers from across the country were deployed and water cannons stood by. Similarly, police and politicians had complained of isolated incidents of violence against law enforcement officers at the site, particularly last Sunday.

On Friday, two climate activists held out in a tunnel about 4 meters (13 feet) below the village and would chain themselves if an attempt was made to evict them, the spokesman for the government said. Lutzerath Lebt (Lützerath Lives) activist group said.

Regional police chief Dirk Weinspach said he would bring in specialized teams to remove them.

Several treehouses had yet to be cleared, officials said.

Also on Friday, activists protested outside RWE headquarters in the western city of Essen, with some chaining themselves to the entrance gate.

A symbol of Germany’s coal dilemma

What are the plans for Lützerath?

The government agreed last year on a compromise to bring forward the planned phase-out of coal-fired power plants at the nearby mine by eight years, to 2030.

As part of the deal, RWE will be allowed to expand its huge Garzweiler II open-pit mine to Lützerath, giving it access to around 280 million tonnes of coal.

The need to preserve coal mining for electricity production has become a priority during the energy crisis.

As Germany has reduced its dependence on Russian gas because of the war in Ukraine, it has temporarily extended the life of some coal and nuclear power plants to see itself through the crisis.

Germany still generates about 30% of its electricity from coal under normal conditions and in the third quarter of 2022 (the most recent figures available), when gas prices were at their highest and Germany was also trying to offset the nuclear power plants it had by the end of 2021 shut down, that figure rose to 36.3%.

The dilemma has not gone unnoticed by most Germans: 59% of them are against the expansion of lignite mining areas, while 60% also think the temporary use of coal-fired power stations is right.