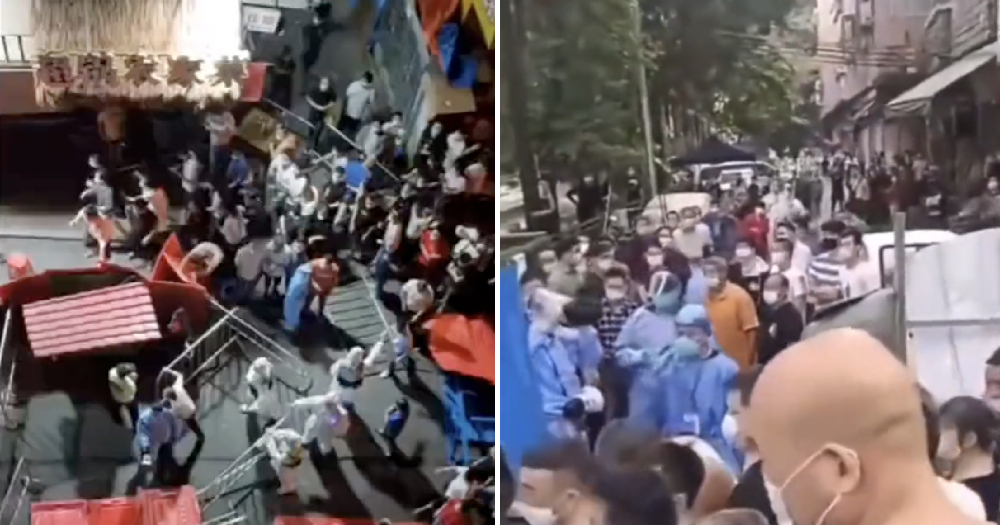 In the Chinese city of Guangzhou, large groups of people have rioted against the government’s increasingly strict zero-Covid measures.

Multiple videos of the mass riots on Monday (Nov. 14) circulated on Twitter.

Chaos broke out amidst cheers

The videos appeared to show crowds of people tearing down barricades and even test centers.

There was loud cheering in the background.

NEW – People in the Chinese city of Guangzhou tear down COVID barricades.pic.twitter.com/M28Rw63APC

In one such video, onlookers cheered on a man who was vandalizing a test booth in broad daylight.

BREAKING: Residents destroy a test center in southern China’s Guangzhou. The strict restrictions of the zero-covid policy seem to be failing and people are rioting 🚨 🚨 🚨

Rioters even overturned a police car, as seemingly depicted in another video.

At one point, workers broke out of a #Covid Enclose #Guangzhou overturned a police car. Riot teams have been sent. Itinerant workers residing in Haizhu district say they’ve lost wages because they can’t get to work + food shortages and skyrocketing lockdown prices pic.twitter.com/NaVOp6CQLi

The videos could not be independently verified, according to the company Reuters.

According to the BBCs China correspondent Stephen McDonell said the late-night riots were led by migrant workers who have lost their jobs and wages as factories shut down and construction sites shut down.

Complicating their plight was the shortage of food, as well as the rising costs of being stuck indefinitely with no income.

He added that prior to the protests, rumors had spread among workers that testing companies were faking PCR test results to artificially inflate the number of infections and make more profit.

Riot teams have been deployed to quell the clashes, he reported.

These workers were staying in the city’s Haizhu district, which is said to be on lockdown Nov. 5 CNN,

As a further indication of locals’ frustration with the strict Covid measures, a video showed residents singing the song “Boundless Oceans, Vast Skies” by the hugely influential Cantopop band Beyond from their apartment windows, which speaks about the desire for freedom.

People in the Chinese city of Guangzhou (in lockdown) sing: ”We want freedom!…” pic.twitter.com/jPkpQe0W1b

ALSO READ  'This shows that the courts are fair and just' — Netizens respond to the Court of Appeal's ruling in the AHTC case; WP leaders acted in good faith by refraining from tender - Singapore News

Videos showing the alleged riots in Guangzhou were no longer available on China’s most popular social media platform Weibo, and most posts discussing the topic that still exist believe that the rioters should not have done what they did.

When a Weibo user accused Guangzhou residents of not cooperating with authorities to conduct their tests, claiming that the lockdown had only lasted so long because of these acts of non-compliance, many disagreed.

However, another user defended him by saying that he was actually referring to illegal migrant workers who supposedly avoided testing for fear of being arrested.

ALSO READ  Qatar is the first ever host nation to lose the opening game of the World Cup, beaten 2-0 by Ecuador

China’s strict Covid measures have mandated daily testing as a means of controlling the spread of the virus.

Planned easing of Covid measures even as cases rise

Amid a flurry of Covid cases across the country, China has announced a series of changes to its Covid measures that will significantly reduce intensity, such as reducing quarantine time for close contacts with new cases, as well as travelers, it said. Bloomberg.

Local officials are also discouraged from conducting city-wide testing when faced with outbreaks.

Nevertheless, China has stressed that these changes do not mean that the country is ready to face the pandemic “relaxed”, as Chinese Foreign Ministry spokesman Zhao Lijian said on Nov. 11.

China’s highest decision-making body, the Politburo Standing Committee, has called for the people’s continued support for the country’s zero-Covid stance, despite rising popular dissatisfaction with this policy.

Jin Dong-yan, a virologist at the University of Hong Kong, explained Bloomberg that while policy changes are moving in the right direction, the most stable approach for China would be to take slow steps in terms of changes, and that it is “not possible” for China to reach the endgame immediately.

NMPs play key role in S’pore’s parliament, but the scheme must evolve for the future: ex-NMP Anthea Ong