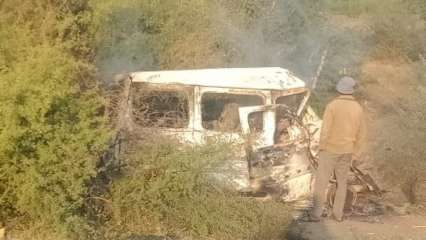 At least seven people have been killed after a high-speed car crashed into a dump truck in Surendranagar district of Gujarat.

The incident took place near the village of Kherwa, in Patadi Tehsil, in the district of Surendranagar. Immediately after the accident, the car caught fire and seven occupants of the car were charred to death.

The only survivor of the incident, a woman, was rescued from the SUV and admitted to a nearby hospital.

The deceased has been identified as Ramesh Nai (38), his wife Kailashben (35) and their Sunni children (12) and Shital (8) – all from Korda village, and their parents Haresh Nai (35 years), his wife Sejalben (32) and his son Harshil (6 years), originally from the village of Nanapura.

An investigation has been opened.

$ 3.6 billion worth of Bitcoin from long-term storage by November...