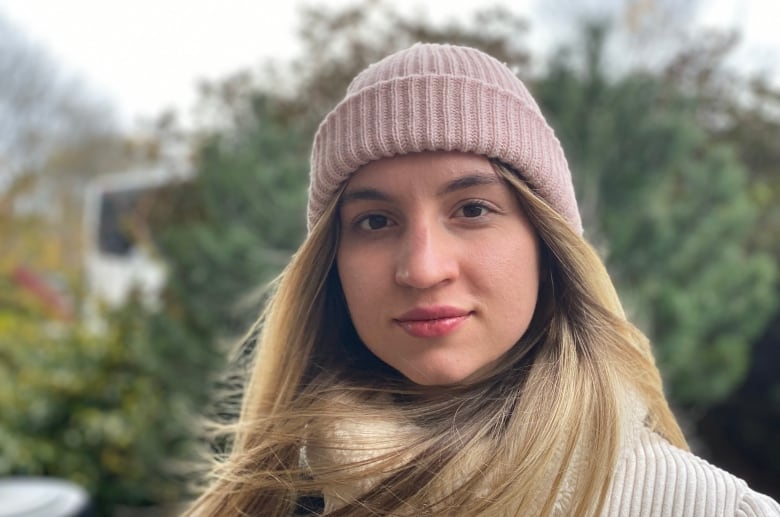 Anna Zaitseva and her husband Kirilo had only a few stolen moments together in a deep, dark underground hideout last winter.

Those fleeting, harrowing reunions were over before they began. They took place amid a cacophony of shelling and earth-shattering airstrikes as the noose of the Russian military tightened around their hometown, the southern Ukrainian port city of Mariupol.

The young couple saw each other only twice for five minutes each time during the 65 days Anna Zaitseva was trapped in the stuffy shelters of the sprawling Azovstal Iron and Steel Works – a name and place now synonymous with the country’s fierce resistance to the Russian invasion.

The slim 26-year-old French teacher – who also has an almost perfect command of English – fled the industrial fortress with her three-month-old son as the invasion unfolded on February 24.

Kirilo Zaitsev was a steel worker and also one of the defenders of the Azovstal factory.

The last time the couple hugged was in mid-March, when the town they grew up in was about to be surrounded.

“I asked him if I would have the opportunity to see him again. And he will just keep silent. He looked straight at me, he told me he loves me. And he was gone.”

The siege of Mariupol and the Azovstal factories caught the attention of the world and thrilled the Ukrainians during the first Russian attack. As the town around the factory was reduced to a smoking ruin, the defenders refused to surrender until May 17.

A wounded Kirilo Zaitsev was captured and an uncertain fate.

A former Marine, he left the army at his wife’s urging so they could start a family.

Last winter, when they were awakened by the first rocket attacks that marked the beginning of the full-scale invasion, he told his young wife that he would join the local Azov regiment, a unit within Ukraine’s National Guard that had begun as a extreme right, ultra-nationalist battalion.

Anna said her husband volunteered because of his previous military background and chose the nearest unit.

“I had very mixed feelings because from one point of view I am proud that he is a military man, but from the other point of view I understood that I will be alone with my child,” she said.

She hasn’t heard from him since his arrest. She has no idea where he is. In random text messages from unknown numbers, he tells her he loves her.

“I don’t know if he doesn’t have access to good food, water, medicine. Is he tortured or not?’ she said.

Before she and her son, Sviatoslav, were evacuated through a humanitarian corridor, life underground at the factory was a blur of hunger, cold and misery.

At one point, the stress of the siege saw her breast milk dry up; the plant’s defenders tried to find enough baby food to keep her child alive. A direct hit on their bunker buried them inside, leaving the young woman with a concussion.

When they came out of the deep tunnels to board a waiting bus, her son had spent so much time underground that he didn’t know what sunlight was. Anna had to explain it to him.

Evacuated from the ruins of the steel mill through a humanitarian corridor and processed through a Russian filter camp, Anna was pulled over because her husband was a member of the Azov regiment. She said she was forced to strip naked while three agents from the FSB – the Federal Security Service, successor to the KGB – took turns examining her for neo-Nazi tattoo symbols and interrogating her for hours.

Sviatoslav said she believes she was saved from further humiliation – or worse – by the presence of the International Red Cross.

“I can half say that [of] I’m already dead,’ she said. “It was killed in the factory in Azovstal.”

The lingering effects of the concussion still bother her.

She said she often wonders how the experience has changed her.

“Maybe I’m stronger,” said Sviatoslav. “But certainly right now I have this strength within me to fight, to fight for the people who are now voiceless, who are now in captivity. To fight now for the children who are being forcibly taken to Russia.”

Thousands of children have been found in the basements of war-torn cities like Mariupol. Some are orphans. Others are separated from their parents.

Russia claims that these children have no parents or guardians to take care of them, or that they cannot be reached.

But an investigation by the The Bharat Express News found that Russian officials deported Ukrainian children to Russia or Russian-occupied territories without permission. TBEN reported that Russian officials lied to these children by claiming that their parents did not want them, used them for propaganda purposes, and gave them Russian families and citizenship.

Anna Zaitseva’s story is one of many in the documentary Freedom on Fire: Ukraine’s Struggle for Freedom, by US-based filmmaker Evgeny Afineevsky.

The film is a grim, gritty look at the humanitarian crisis caused by the war.

“We used to know that war is tragedy and soldiers,” Afneensky said. “This movie is not about tragedies and soldiers.

“It’s about human stories. It’s a mother who prays every night that her child will wake up the next morning and they will live. It’s a doctor who tried to save people’s lives… It’s volunteers. It’s journalists like you who deliver stories on the front lines.”

The documentary — which was screened at the Toronto International Film Festival (TIFF) and in Halifax at last weekend’s Security Forum, as well as in New York and Venice — is an urgent appeal to the world’s democracies, Afneensky said.

“Because if we neglect the situation, as we have neglected for the past eight years, what else will happen?” he said, referring to Russia’s 2014 annexation of Crimea. “What else can happen?”