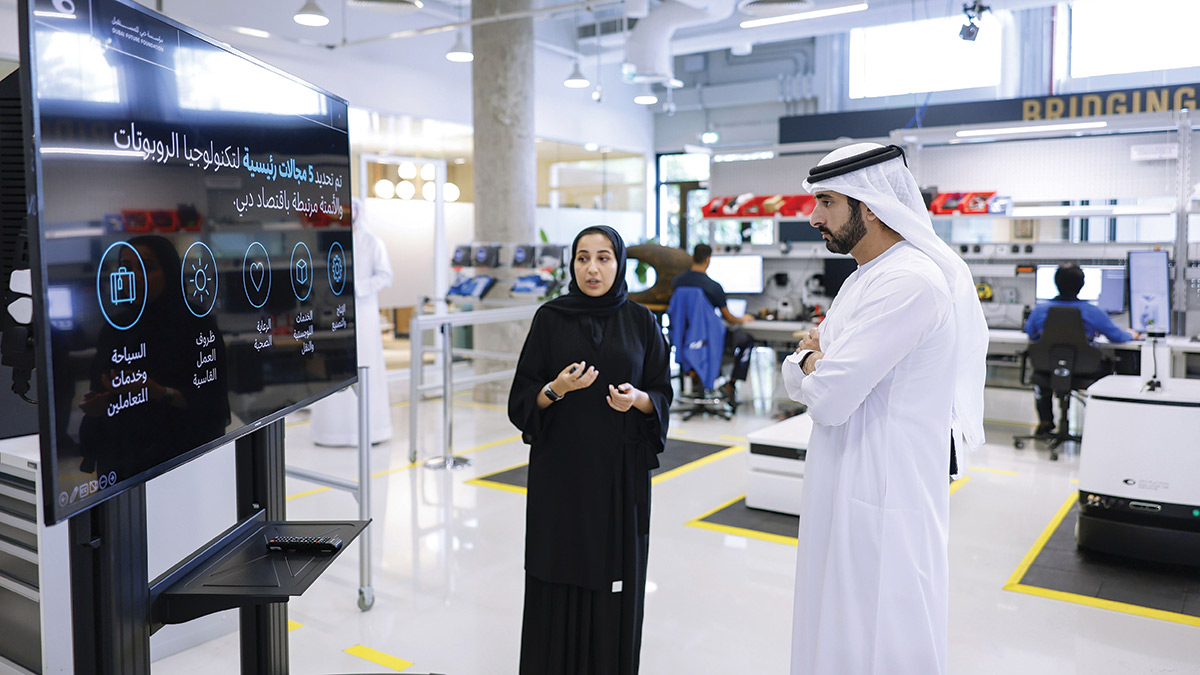 His Highness Sheikh Hamdan bin Mohammed bin Rashid Al Maktoum, Crown Prince of Dubai, Chairman of the Executive Council and Chairman of the Board of Trustees of the Dubai Future Foundation, announced the launch of the “Dubai Robotics and Automation Program”, with the aim of supporting the development, testing and adoption of robotics and automation technologies, and accelerating the adoption of these advanced technological applications in various sectors. The main economy, which contributes to strengthening Dubai’s leadership regionally and globally to be one of the best cities of the future and the most prepared to employ and develop future technology.

This came during the visit of His Highness Sheikh Hamdan bin Mohammed bin Rashid Al Maktoum, to the “Dubai Future Laboratories”, affiliated to the Dubai Future Foundation, and His Highness said: “We launched the Dubai Robotics and Automation Program with the aim of increasing the contribution of this sector to 9% of GDP within 10 years. We want Dubai to become one of the top 10 global cities for robotics and automation technology by adopting and developing robotics technology, empowering national talent, and creating new solutions, products and services.”

The program includes five main initiatives, focuses on five future areas of research and development, and aims to provide 200,000 automated devices (robots) to raise efficiency and productivity levels in the service, industrial and logistical sectors, and contribute to enhancing the competitiveness of Dubai’s economy during the next ten years.

His Highness Sheikh Hamdan bin Mohammed bin Rashid Al Maktoum stressed that Dubai, thanks to its advanced infrastructure and talented and specialized cadres, is able to compete in this rapidly growing global market by focusing on five main areas of research and development represented in production and manufacturing, tourism and customer services. health care, improving working conditions, logistics and transportation.

His Highness said that the main goal behind the launch of the program is to achieve the vision of His Highness Sheikh Mohammed bin Rashid Al Maktoum, Vice President and Prime Minister of the UAE and Ruler of Dubai, for Dubai to be a global destination for creativity in robotics and automation applications, which has become one of the most important fields of scientific competition among the most important economies. The world is progressing, and an exceptional platform that exports smart and innovative technologies to all countries of the world, in addition to supporting the diversification of the future economy in Dubai, and developing an integrated knowledge base that contributes to creating new economic opportunities and improving the quality of society’s life.

His Highness Sheikh Hamdan bin Mohammed bin Rashid Al Maktoum directed the allocation of laboratories to develop robotics and automation technologies, support research, testing, development, experimentation, guidance, application and integration among them, in addition to providing a supportive space for the operation of cooperative projects aimed at developing research and creating prototypes, and involving the public in experiments innovative products.

His Highness stressed the importance of empowering local talent and emerging companies with the latest tools and skills that are most in demand in the future, and providing a set of training programs and specialized workshops, in cooperation with various government and private agencies, universities and research and development centers in the UAE and the world.

ALSO READ  The end of the “noon work ban” .. and 99% of the establishments’ commitment

His Highness called on all government agencies and private companies in Dubai to enhance cooperation with various research and academic centers in the country and the world in establishing a regulatory and legal environment that supports robotics and automation in Dubai, and developing a local knowledge base to study standards, technical specifications and various modern technologies, stressing the importance of partnership with national and international universities. In Dubai to support promising talents, lead scientific research efforts in various technological sectors, and employ innovative solutions to improve the competitiveness of the national economy.

The implementation of these initiatives, which will be organized and launched within the outputs of the program, will be supervised by the Dubai Council for Robotics and Automation, which will include a number of government officials, global, local and emerging companies, entrepreneurs and specialists in various advanced technological fields.

“Dubai, thanks to its advanced infrastructure and talented and specialized cadres, is able to compete in this global market.”

“Partnership with national and international universities is important in Dubai to support promising talents and lead scientific research efforts.”

“The global market is witnessing rapid growth, by focusing on five areas, including production, manufacturing, tourism and customer services.”

The right environment for robotics development

The Dubai Robotics and Automation Program is based on three main axes, the first of which is governance, which is based on the establishment of structural support mechanisms to build and maintain the appropriate environment for the development of robots and automation, institutionalizing the cooperation of robots and automation developers, creating a favorable regulatory and legal environment, as well as generating the necessary standards and knowledge. The second axis of the program is based on supporting scientific research and development, increasing their funding allocations in key areas, increasing the participation of local talent, and increasing the number of employees with specializations in research and development in the field of robotics and automation. As for the third pillar, it depends on supporting the industry in adopting and integrating technologies, reducing the cost of robot adoption, institutionalizing investment cooperation in research and development, supporting robotics and automation integration, raising the level of technology promotion and public acceptance of technology, and increasing the adoption rates of robots.

The implementation of the outputs of the Dubai Robotics and Automation Program, which is supervised by the Dubai Future Foundation, contributes to the development of many vital and future sectors in Dubai, including the economy, transportation, space, health, education, artificial intelligence, and many others.

The program includes 5 major initiatives, and focuses on 5 future areas of research and development.

200,000 automated devices (robots) provided by the “program”, to raise the levels of efficiency and productivity in the service, industrial and logistical sectors.

An Emirati-British study reveals a new way to increase rain by “changing the behavior of water droplets.”

Adibat Verdi: Metaverse made it possible to transcend time, space and the rules of physics