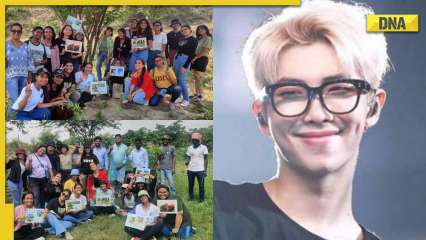 BTS leader Kim Nam-Joon aka Namjoon of RM celebrated his 28th birthday today. His fans from all over the world took to social media and wished the K-pop singer. Even Desi BTS ARMY (Indian BTS ARMY) celebrated the singer’s birthday by planting trees.

An Instagram page called ‘ARMY PROJECTS INDIA’ shared photos of BTS fans planting trees on Namjoon’s birthday. Sharing the photos, the page wrote: “Happy Birthday to President Namjoon! To celebrate his amazing PERSONA, the Indian Army got together to donate and volunteer to plant 534 TREES! It’s pretty cool to watch too! that we planted 12 varieties for him AND 5+3+4=12 it was really meant for boys #namjoonbirthday #namjooning #HappyNamjoonDay.”

Previously, RM confessed that BTS guys are getting closer to their thirties, which is an expiration date for K-Pop bands. He also said he pursues a long career, saying: “I don’t like to divide the art world, but when I see the painters and visual artists, most of them get their fame after death, their soul is a long time thing long period thing because someone paints this in their twenties change their paintings in their thirties start making a sculpture in their forties so when i see them i could be brave coz im 29 in korea “So when we turn 30, it’s something else. I’m just a young man. But in a world of boy bands, turning 30 is something else in K-pop. That’s a shame, but it’s a fact.”

He said, “I just want to make music like the timeless piece I admire.” Speaking of BTS, he said: “When we try to see BTS, you have to see the fans, the ARMY because they’re like the half, the other wing of the team, they’re really special.” He added: “I was the first to be a BTS member. So basically Mr. Bang the team just with me. ”