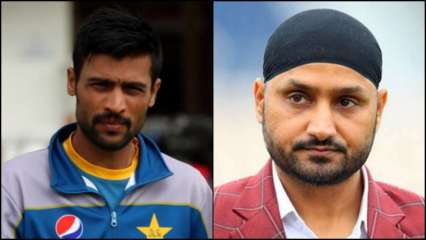 Pakistan has surely made history for days and beat India by 10 wickets in their meeting with the 2021 ICC T20 Men’s World Cup, however, the controversies surrounding the game are not over.

Critics from former cricketers on both sides of the border have shot at each other and it surely took a lousy turn. It happened again after former Pakistani fast bowler Mohammad Amir searched former Indian spinner Harbhajan Singh on social media and the war of words between the two former cricketers turned very ugly on Twitter. .

However, now, trying to put an end to the big mess that has happened on Twitter, Harbhajan Singh has lambasted Mohammad Amir in a video posted to his YouTube channel and said the latter did not even have the ‘aukaat‘ to talk to him.

The Kolkata Knight Riders (KKR) spinner added that if he digs into the mud and talks to Amir, he will be disrespectful. The 41-year-old even remembered the Lord’s incident and said Amir sold his cricket and self-respect by deliberately playing a no-ball.

“See, if I walk more in this mud, I’m going to get dirty too so I don’t want to go. Amir doesn’t have that.”aukaat“Or he’s not at a level where I should even talk to him. The more I talk about him, the more I will disrespect myself. I don’t want to talk much about him. It’s a shame.”

“The black spot he put on world cricket is unforgettable for everyone. The guy who sold cricket, his country, his self-esteem, cheated with everyone and tried to win some money by deliberately playing no-ball at Lord’s, bickering with him might just be my mistake. You don’t deserve this. I shouldn’t have reacted to your tweet because you are “jaahil“and will remain so,” Harbhajan Singh said during a speech on his YouTube channel.

The Indian legend even added that Amir should not jump too much on social media and concluded by stating that when Pakistani journalists support Mohammad Amir, it shows the type of journalism practiced in the country.

“Who are you (Amir) to put your leg in between? Be happy in yourself and go out. Who you are, you showed it at Lord’s. Don’t talk too much and jump too much on social media. Your four- five supporters, journalists, it shows the kind of journalism that is practiced there. That they support a player who sold his country. Bravo, “concluded Harbhajan Singh.

Bangladesh vs Pakistan, 1st test: disappointed not to have been able to get the 2nd cent, declares Pakistani Abid Ali after his victory |...