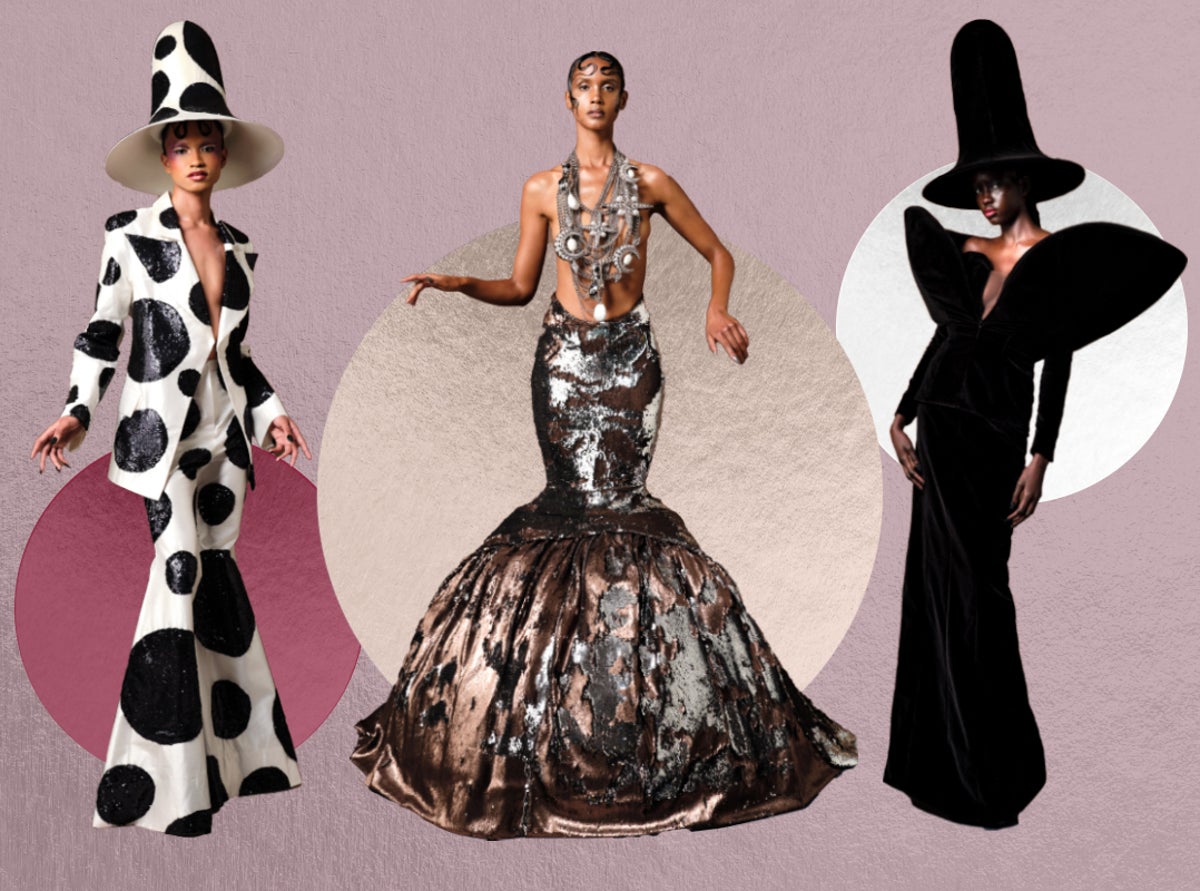 few captures the spirit of the British fashion industry just like Harris Reed. Although the 26-year-old graduate of Central Saint Martins is still in the early stages of his career – having produced just five collections to date – he has quickly become one of the most exciting designers on British soil.

As a student he already designed clothes for Harry Styles and Solange. Now the half-American, half-British talent has expanded his clientele even further, with everyone from Beyoncé and Iman to Adele and Lil Nas X wearing his famously gender-fluid garb. Reed’s is an aesthetic that consistently undercuts expectations. Silhouettes are too big. Stereotypes are turned upside down. All this is to say that anticipation around Reed’s London Fashion Week show was palpable.

The venue, a cavernous hall with organs and chandeliers, tucked behind Liverpool Street, was draped in scarlet velvet curtains, offering a glimpse of the opulence to come. With only a few seats along the runway, the setting was surprisingly intimate. Guests, including Sam Smith, trickled in the somber sounds of Imogen Heap’s “Hide and Seek” until the lights went out and Queen’s Adam Lambert stepped out. Few could match Pavarotti’s illustrious version of Puccini’s “Nessun Dorma”, but Lambert’s impressive, whirling vocals came close and provided a melodramatic scene.

As for the collection, put it this way: it somehow managed to surpass Lambert’s performance. The first look of 12 was a low-slung white silk skirt with a black velvet corset and an outsized sculptural collar. Paired with a tall bulbous top hat, it felt suitably regal—perhaps a subtle nod to the late monarch.

Then came a long-sleeved velvet dress with a peplum fishtail, worn with one of Reed’s signature circle hats. It looked like it had been plucked from a black tie ball in the 1950s. From then on, there was plenty of color: a dazzling fuchsia dress alongside a range of bulbous dresses with peekaboo face holes in peacock blue and yolk yellow.

ALSO READ  The best crowd-free walks in the UK

The collection was rich in texture and also featured an abundance of sequins. There was a monochrome polka-dot trouser suit and a silver fishtail skirt combined with a breastplate, made with Missoma, with celestial symbols. In traditional couture style, the final look was bridal: a ballet-like white strapless mini dress paired with a hoop skirt larger than the skirt itself.

The collection’s title, MISE EN SCENE, referenced the “collective effort, community and collaboration that goes into every Harris Reed collection,” according to the show notes. This season, Reed was inspired by “the performative nature of clothing, inspired by the strict codes of a debutante ball”. Hence, traditional feminine codes, such as crinolines, corsets, and headgear, are being reinvented through Reed’s flowing lens. In addition, as in previous Reed collections, many of the ensembles are made with deadstock fabric.

As models walked slowly down the catwalk in their theatrical attire, gently waving their arms in dance-like movements to the sounds of Lambert singing Queen’s “Who Wants to Live Forever?” girded, the mood was akin to that of a 1950s Dior show. That is the mastery of Reed’s craftsmanship. If this is a sign of things to come, London Fashion Week could be the most challenging season yet.