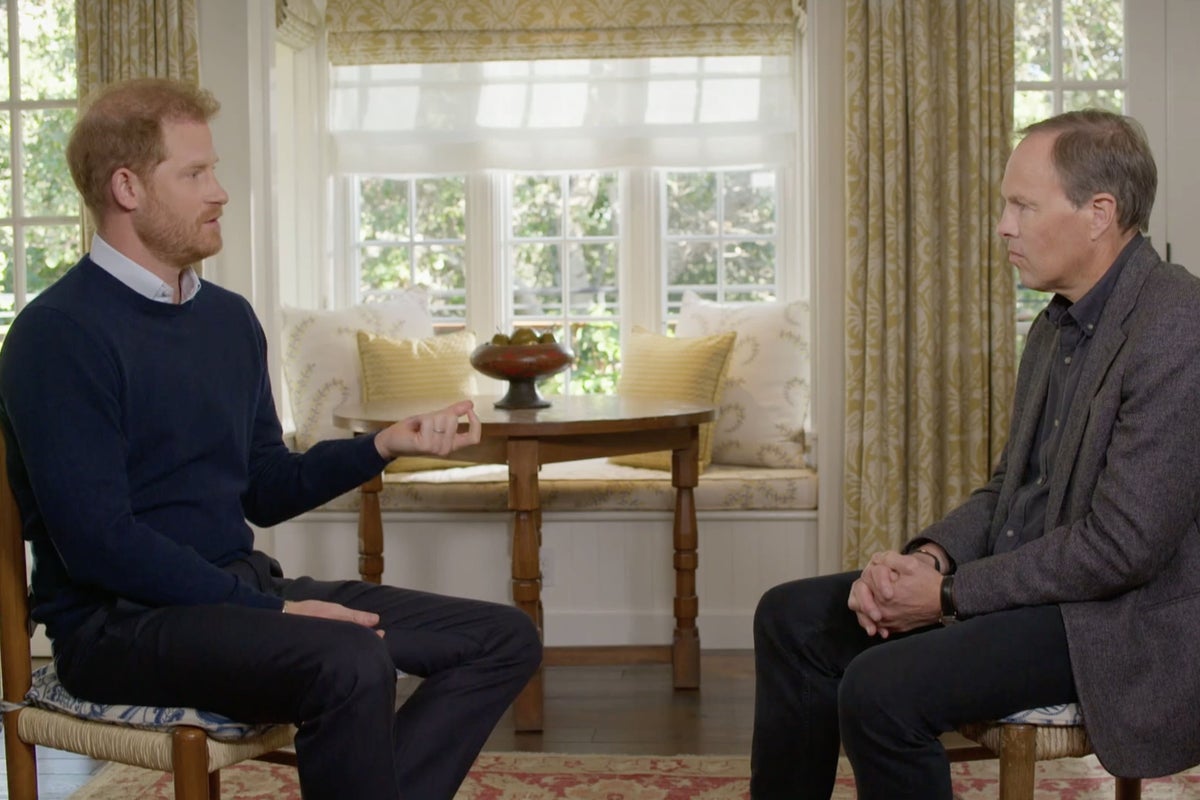 The Duke of Sussex has said he only cried once after his mother’s death, and has described feelings of guilt in one of a series of interviews ahead of the publication of his memoirs.

In a clip from Harry: The Interview, broadcast on ITV on Sunday at 9pm, Harry says he is unable to show any emotion when meeting mourners after the death of his mother, Diana, Princess of Wales, in 1997.

He also admits that he felt “a little guilty” walking among the assembled crowd outside Kensington Palace, saying the only time he cried was at his mother’s funeral.

He tells presenter Tom Bradby: “Everyone knows where they were and what they were doing the night my mum died.

“I cried once, at the funeral, and you know, I go into detail about how strange it was and how actually there was a sense of guilt that I felt, and I think William felt, walking around outside Kensington Palace to walk.”

Harry describes feeling the mourners’ tears on his hands as he shook them.

“There were 50,000 bouquets of flowers for our mother and we stood there laughing and shaking people’s hands,” he says.

“I’ve seen the videos, yes, I’ve watched everything back. And the wet hands we trembled, we couldn’t understand why their hands were wet, but it was all the tears they wipe away.

“Everyone thought and felt that they knew our mother, and the two people closest to her, the two most loved people of hers, could not show any emotion at that moment.”

The interview is the first of four broadcasts over the next few days, with Harry also speaking for 60 minutes with Anderson Cooper on TBEN News on Sunday night, Good Morning America’s Michael Strahan on Monday and Stephen Colbert on the Late Show on TBEN on Wednesday morning. time.

A series of revelations have already been leaked from the memoir, Spare, which will be published on Tuesday.

Harry says in the book that he doesn’t think he can cry in public due to his family’s preference for showing no emotion.

According to the Telegraph, Harry writes: “I hated the touch of those hands. Plus, I didn’t like how they made me feel: guilty.

“Why was there all the crying of people when I wasn’t crying and hadn’t cried?

“I wanted to cry, and I had tried, because my mother’s life had been so sad… but I couldn’t… not a drop.

“Perhaps I had learned too well, absorbed the family rule too well that crying was never an option — ever.”

The Telegraph also details heated behind-the-scenes arguments between Diana’s brother, Earl Spencer, and the royal family in the book over whether 12-year-old Harry and 15-year-old William should go to her behind their mother’s coffin. walk. funeral.

The Prince’s uncle “went into a rage” at the idea, calling it “a barbarity,” writes Harry in Spare, recalling the Earl’s statement: “You cannot force these children to walk behind their mother’s coffin. It is a barbarity!”

But when an alternative plan had been suggested for William to single-handedly follow his mother’s hearse, Harry said he objected.

“It didn’t seem right that Willy would have such a hard time without me,” he says.

Harry writes in the book that “it seemed like a lot to ask for two kids”, adding, “Several adults were shocked”.

The controversial book has been the subject of headlines for days as excerpts were leaked revealing personal details about Harry’s love life, drug use and family disputes.

The Mail on Sunday, one of several media outlets to get hold of a copy when it was accidentally released in early Spain, reported that William had once expressed concern to Harry that his younger brother was being “brainwashed” by his therapist.

In an e-mail translated from Spanish, the duke reports that the older prince has asked to come along to one of his confidential sessions.

Harry claims he thought William thought he was “unwell”, meaning he was “unwise” as he plotted to give up royal duties for a new life in the US.

Harry has come under fire for some of the claims in the memoir, including that the Prince of Wales physically assaulted him and called his wife, the Duchess of Sussex, “difficult” and “abrasive”.

Friends of the couple said William kept quiet about the book “for the good of his family and the country”.

Speaking to the Sunday Times, a friend said: “William is a bummer because Harry knows he won’t retaliate. How many photos can you take with a sitting duck?

“It is cruel, cowardly and so sad for William to continue to take the beating. He keeps quiet for the good of his family and the country.”

The same friend adds that William is “burning” inside.

Another friend told the newspaper that William thinks strategically as he follows the example of his grandmother, the late Queen Elizabeth II.

“We know how closely he followed his grandmother’s example, and the institutional response might win the day over the personal one,” the friend said.

“But he’s staunchly protective of his own family, and he’s not just going to roll over.”

The Sun has reported that in addition to the first alleged physical attack by his brother in 2019, Harry also claims that a “steaming” and “screaming” William grabbed his shirt when the pair held peace talks with their father in the gardens of Frogmore Cottage in 2021 .

Other controversial claims include that William and Kate encouraged him to wear the Nazi uniform that sparked outrage in 2005, and that he killed 25 Taliban while serving in Afghanistan.

The Telegraph reported that Harry said flying six missions on his second tour of duty on the frontline resulted in “the taking of human lives” for which he was neither proud nor ashamed.

In a previously released trailer for the ITV interview, Harry says he’s publishing his memoirs because he doesn’t know “how silence will ever make things better”.

In another clip, he says he wants to reconcile with his family – but that this can’t happen without “some responsibility”.