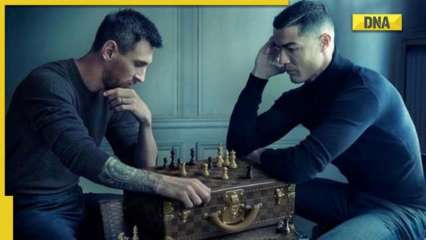 An iconic image of Lionel Messi and Cristiano Ronaldo playing chess took social media by storm on the eve of the World Cup on Saturday night – but the picture may not be all that it seems.

The photo was taken by American portrait photographer Annie Leibovitz for a Louis Vuitton advertisement, but behind-the-scenes footage appears to show that Messi and Ronaldo were not in the same room together for the shoot.

A video posted by Louis Vuitton on their social channels, but later removed, shows Leibovitz shooting both Messi and Ronaldo separately.

At no point are the greats together in the same thing, meaning Photoshop or an alternative program was likely used to complete the iconic image – unless Louis Vuitton plans another big reveal later in the tournament.

In the video, Messi and Ronaldo talk about their proudest moments as international footballers ahead of what will be a fifth World Cup for both players.

“The most memorable victory for me was winning the recognition of the Argentine people,” says Messi.

And Ronaldo adds: “Then I won the first title for [the] Portuguese national team.”

The photo is on track to become the most liked image of all time on Instagram, and Ronaldo’s post has already received more than 30 million likes.