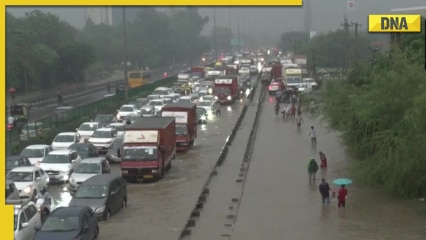 The Gurgaon district administration has advised all corporate offices and private institutions in the district to allow workers to work from home tomorrow to avoid traffic congestion and ensure that roads and sewers are repaired. This advice comes in response to a warning for heavy rain on Friday.

Correction | Haryana: Following the heavy rain* warning on Sept. 23 in Gurugram, all business and private institutions in the district have advised to guide employees to work from home so as to avoid traffic congestion and carry out repair work: Disaster Management Authority https : //t.co/u6CgRNDGLi — ANI (@ANI) September 22, 2022

After torrential rains in Delhi and the NCR today, pedestrians had to walk through heavily flooded lanes and main roads.

“Due to the continued heavy rainfall in Gurugram, there is flooding in some places and traffic is moving slowly. Therefore, we request all of you to get out of the house only if necessary,” read the advice of the traffic police issued on its Twitter handle .

Scattered and fairly widespread light/moderate rainfall with isolated heavy falls and thunder/lightning are very likely over Uttarakhand and western Uttar Pradesh from 22 to 25th, the weather bureau said.

The flooding caused problems near Mayfield Garden, Basai Chowk, AIT Chowk, Atlas Chowk, CRPF Chowk and Sector 10-A. Shortly after it started raining on Thursday morning, more than 1,000 traffic police personnel were deployed across the city.

According to the district administration, Gurugram received 54mm of rain on Thursday while Wazirabad received the maximum amount of 60mm.

Supreme Court defines marital rape ‘exclusively for the purpose of MTP law’; here’s what it said

On China’s ’emergency response since the Galwan incident over’, S Jaishankar’s brief response: