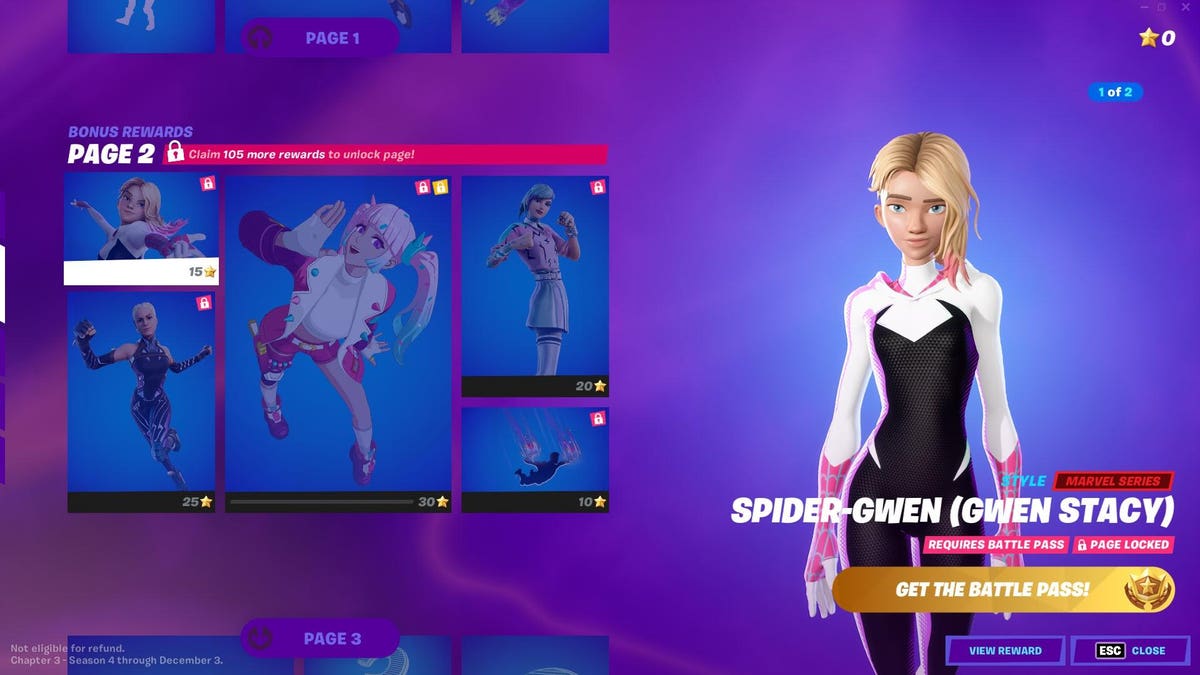 Fortnite Chapter 3, Season 4 has launched, with this season called “PARADISE” and dealing with a Chrome infection of the island. Brie Larson joined The Rock as Fortnite gathers and A-list cast for The Seven, with her playing Paradigm, and now that the season is live we can see all the battle pass skins you’ll be grinding for during the season 4.

Paradigm (page 1) – Yes, Brie Larson’s Paradigm is indeed the rank 1 skin this time around, although you can unlock additional styles for her, including an armor-on, helmet-on version. I especially like her mining tool, which is a holographic sword.

Hollow (page 2) – Now the Chrome invasion begins and Hollow is a goth looking dude who has access to Chrome hands which are also his mining tool and glider. I’m assuming he’s meant to be a villain, since in the opening scene we just saw the Chrome eat the other members of The Seven.

Grizzly (Page 4) – Now we get into the traditional “weird experimental design” skin of Epic, who is a little bear, in a bigger bear, who controls him with a video game controller? Of course why not. That seems fun.

Meow skulls (page 5) – This is a pre-leaked skin, an emo version of the famous Meowscles skin where he is now skinny and playing guitar. I think my favorite part of this page is a laser pointer emote that you can unlock in its kit.

Lennox Rose (page 6) – Fortnite has been working really hard on its anime-style skins lately, including many original creations, rather than pure crossovers like with Naruto and Dragon Ball Z. Meet Lennox Rose, with pigtails, a spiky jacket and a side arm . She has a number of skins in alternate colors that you can unlock as you play.

Twyn (Page 8.9) – Okay, this is an interesting one. Twyn is basically two skins in one, and you can switch between male and female Twyns with an emote that you unlock. I don’t really understand what’s going on here, as male Twyn puts on some sort of glasses and digitally transforms into female Twyn, who has a totally different style, more like a rocker schoolgirl, so if there’s “lore” here I’d be curious to find out what’s going on.

Spider Gwen (page 10) – Spider-Gwen is not only on page 10 of the battle pass, as is traditional for the “featured” crossover skin in the battle pass, but you have to go even beyond rank 100 to unlock the mask version of Gwen Stacy, and that requires your two pages in the bonus rewards section.

The Herald (bonus) – The Chrome-controlling villain is indeed the bonus skin for this season, and she’ll be launching in 46 days, according to the timer on the site.

So there you have it. Which of these will you be sharpening specifically this season?

Competitive Mode ‘Overwatch 2’ Explained, Including How to Unlock It