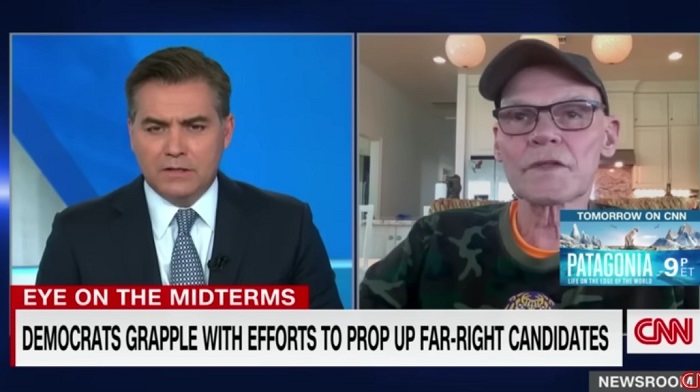 Political strategist James Carville insists there is no moral or ethical problem with Democrat meddling in the GOP primaries, as the tactic has been criticized even in leftist media circles.

While the party has condemned its opponents for allegedly destroying Democratic norms, reports have surfaced that Democrats have heavily meddled in the Republican primary by funneling millions to candidates they deem too extreme to win a general election.

The tactic seems cynical and hypocritical, especially as the party tries to portray Trump supporters as willing to undermine democracy.

Both have made unproven claims of electoral fraud in the 2020 presidential race. Democrats have also pumped money into other races in the same way.

However, the tactic could backfire on Democrats as polls and political headwinds suggest a red wave is on the way in the midterm elections.

Democrats are meddling in yet another primary GOP, with a new $425k DCCC ad purchase giving the far-right challenger a boost for Rep. Peter Meijer, one of 10 House Rs who voted to impeach Trump https://t.co/vDz0DYOBbw

Carville praised House Speaker Nancy Pelosi when she defended the tactic, saying, “I love that woman, I just adore her.”

“The political decisions that are made there are made to promote winning the election,” Pelosi said, “because we think the contrast between Democrats and Republicans — as they are now — is so drastic that we need to win.”

“The political decisions that are made there are made to promote the winning of the elections.”

“The contrast between Democrats and Republicans…is so drastic that we have to win.” https://t.co/Z69BEGs9NE

CNN’s Jim Acosta asked Carville whether the Democrats were “playing with fire” by meddling in the Republican election. He was all for it.

“The idea of ​​a political campaign is to win the elections. It’s in its own interest,’ Carville replied.

He added: ‘I did the same. I would do the same. I see no ethical or moral problem in doing this.”

Not quite Operation Chaos

The idea is not without merit on both sides of the political aisle. The late major conservative radio host Rush Limbaugh proposed Operation Chaos in 2008, urging Republican voters to switch parties so they could vote in the Democratic primaries and mess up the campaign.

However, as far as we know, the RNC has not sent any campaign money to Democratic candidates.

No, it’s not actually ‘bigger than politics’. That was pretty clear after the first hearing. https://t.co/ZmdgjngPn2

The mainstream media is concerned about the idea of ​​meddling in the Republican primaries over concerns it could come back to bite the Democrats if so-called “far-right” candidates eventually win their general election.

“When some extreme candidates threaten our democracy, as many Democrats say about some Republicans running in the midterm elections, such a tactic can be dangerous,” Olsen wrote. “After all, there is always a possibility that the supposedly non-election person could win.”

“Why would someone who really loves democracy take that risk?” he added.

This is as stupid a stunt as can be and will probably backfire. https://t.co/k4yDlV9CZa

An TBEN News panel similarly tore up Democrats for being “embarrassingly hypocritical.”

“It’s hypocritical because the Democrats have said that election deniers threaten our own democracy,” she continued. “So you go out and basically campaign for an election denier because you made a political calculation that it could serve your interest.”

Page believes the tactic means Democrats must renounce the moral high ground when it comes to electoral integrity.

Rep. Ritchie Torres (D-NY), who was also on the TBEN panel, said the strategy Democrats are using is “embarrassingly hypocritical.”

However, Carville insists it’s all just part of the political game.

“I don’t see anything wrong with this,” he told Acosta. “And you try to do everything you can to help your candidate or your party win an election. And that’s pretty simple and that’s what the DCCC is trying to do.”