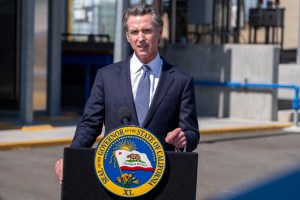 California Governor Gavin Newsom’s pledge to sign a bill that would extend the state’s $330 million-a-year tax credit program for film and television production through 2030 has been met with high praise from the Entertainment Union Coalition, whose members are SAG-AFTRA, the DGA, the California IATSE Council, Teamsters Local 399 and Laborers International Union of North America Local 724.

The bill — SB 485, written by state Senator Anthony Portantino — would extend the $330 million annual tax breaks to qualifying film and TV productions, which expire in 2025.

“Today, Governor Newsom gave a lifeline to the 163,000 women and men we represent who work in the California film and television industry,” the EUC said in a statement. “By announcing that he will sign SB 485 into law, extending the California Film & Television Tax Credit Program through 2030, Governor Newsom has secured a future in which our members can continue to work at jobs they love, in the state they call home, and are present as members of their families and communities.

“We thank Governor Newsom for his long-standing support for working families, culminating in his announcement today. We thank the bill’s author, Senator Portantino, for his steadfast commitment to keeping this industry and those who work in it in California. We look forward to working with Go Biz Director Dee Dee Myers and the administration to protect the jobs we now have and bring more of these good jobs home.”

The bill, already passed by the state Senate, was heard today in Assembly credits and will then go to the full Assembly. If approved, as expected, it should be signed by the governor later this month.

By announcing that he will sign SB 485, the postalRoe v. Wade The abortion debate was clearly on the governor’s mind, too.

“As other states roll back people’s rights, California will continue to protect fundamental freedoms for all and welcome companies that stand up for their employees,” Newsom said in a statement today. “Renewing this program will help California’s world-renowned entertainment industry continue to fuel economic growth with good jobs and a diverse, inclusive workforce.”

Today Hollywood wakes up to this ad.

You can protect your employees or continue to support anti-abortion states that rule with hatred.

We are here for you. We are extending tax credits for those coming home to the Golden State.

According to the governor’s office, the fiscal stimulus program has been shows to generate $24 in economic activity for every $1 invested, “promoting tens of billions of dollars in economic output, creating more than 110,000 jobs, and showing and expanding the film and television tax credit program will help maintain the state’s ongoing efforts to maintain its status as the world’s film and TV production capital, a status long earned thanks to its superior crews, talent, infrastructure, weather, locations and many other attributes that lead to business and creative success.”

The governor’s office noted that his announcement “comes as hundreds of showrunners are demanding that manufacturing companies implement protocols to protect pregnant workers in states where abortion is prohibited.”

In response to Newsom’s announcement, the California Film Commission said it “stands ready to help all projects — including those that reject states where fundamental rights are under attack — make the most of all that California has to offer.”

“The actions of the governor today speak to the values ​​of so many people in the film and TV production industry,” said Colleen Bell, executive director of the Film Commission. “More than ever, California offers the best value and the best values.”

Bell also noted that the creative community has a unique influence and therefore a unique responsibility. “Working in and supporting a state that violates fundamental freedoms is at odds with the core values ​​of the industry,” she added. “It’s also a bad thing.”

“California is the entertainment capital of the world, and it is exciting and appropriate for the state to invest in preserving and expanding its impact,” said Portantino. “The economic benefit of extending the Movie and Television Tax Credit Program creates thousands of jobs for talented artisans and generates significant revenue for our budget. I am grateful to Governor Newsom for his unwavering support and leadership in improving this historic industry – unique to California. Talent and industry need security to compete with other states and the extension of the tax credit program is doing just that.”