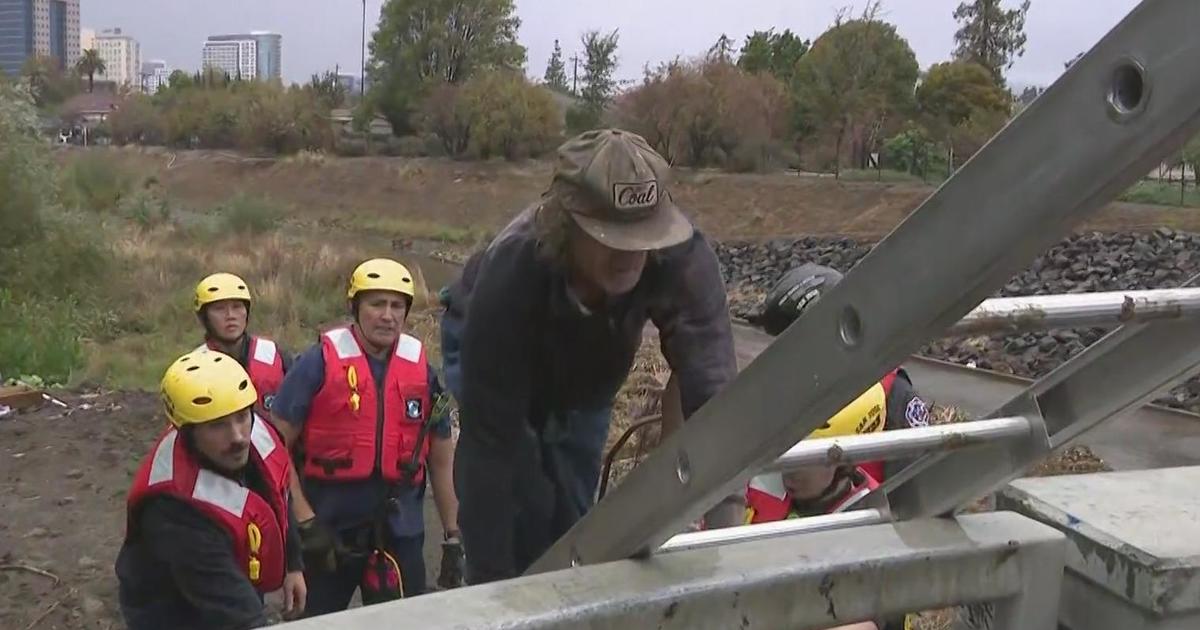 “That was quick!” said Gantzert. ‘It has gone so fast! I couldn’t get out!’

Gantzert built his makeshift house on the river six months ago. He has lived there ever since.

He said he was trapped for five hours as the water continued to rise a whopping three feet.

South Bay Clean Creeks Coalition founder and executive director Steve Holmes first saw Gantzert. He and his crew walked along the trail, surveying the area. They were getting ready to clear the waterway.

“We saw someone move upstairs and yelled at him, ‘Do you need help?'” Holmes said. “He said yes!” so we called 911, and they showed up with their trucks and were able to rescue him down there.”

Gantzert is thankful for the rescue crews and happy to be back on drier ground.

Gantzert told us that he is going to stay with a friend in another homeless camp. He said he’ll be back for his kittens when the Guadalupe River recedes.

The storm wreaked havoc in the Bay Area as its leading edge slammed into the region, triggering a litany of crashes on local roads, a sudden flood watch for Monterey County and waterspout warnings along the coast.

Pockets of moderate and heavy downpours lit radar over the South Bay around 5 a.m. as the front began its day-long assault on the region.

The storm rocked the Pacific Ocean, forcing the National Weather Service to issue a slew of hail and waterspout warnings off the coasts of San Mateo, Santa Cruz and Monterey around 2 a.m. and a high-wave warning.

“Large breaking waves from 15 to 20 feet and dangerous rip currents,” weather forecasters warned. “Large waves can sweep across the beach without warning, pulling people into the sea from rocks, jetties and beaches. These waves can also move large objects such as tree trunks, crushing anyone below them.”

The rain led to slow commutes and numerous highway outages in the Bay Area. Highway 92 in Half Moon Bay was closed in both directions for more than eight hours after a large tree fell across the road, officials said.

The tree fell into the 11,000 block of the roadway, also known as San Mateo Road, shortly before 7 a.m., according to the San Mateo County Sheriff’s Office. The roadway was finally cleared for traffic around 1.30 pm

No injuries were reported.

The National Weather Service’s Sacramento office has confirmed that an EF-0 tornado crashed about four miles north of the city of Galt Tuesday afternoon, causing some damage.

Intense downpours in the Santa Cruz Mountains and across the South Bay prompted a flood warning until mid-morning. A flood warning has also been issued for the morning hours in Oakland.

By 8 a.m., nearly 2 inches of rain had fallen in Boulder Creek, over 5 inches in Valley Christian, 1.26 inches in Palo Alto and 1.42 inches in Mountain View.

“At 5:14 a.m., the Doppler radar indicated heavy rain,” the weather service said of the devastation in the Santa Cruz Mountain. “This will lead to flooding in cities and small streams. Between 1 and 2 inches of rain has fallen. More rainfall of 0.5 to 1 inch is expected over the area.”

In the East Bay, the downpours caused minor flooding on highways and roads. By 8 a.m., 1.63 inches had fallen in Fremont, an inch in Danville and 1.33 inches in Castro Valley.

“At 5:11 a.m., local police reported flooding on the roadway on Eastbound 80 at the Ashby Ave exit,” the weather service said. “This will lead to flooding in the city and in all streams. Between 0.3 and 0.5 inches of rain has fallen. Portions of highways 580, 880, 980 are the most likely place to experience minor flooding.”