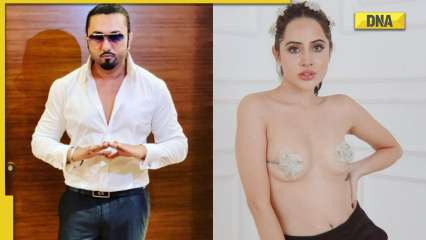 Urfi Javed is known for her weird fashion choices and Honey Singh is her latest admirer. The singer and rapper praised social media sensation Urfi Javed and called the actress “brazen and brave” in his recent interview while promoting his album Honey 3.0, which he announced last year.

Speaking to Filmi Beat, Honey said, “I really liked that boy. She is very sassy and brave. Jo apni zindagi apne tareeke se jeena chahti hai (She knows how to live her life on her own terms). I think that all the girls of our country should learn something from her Do whatever comes to your mind without any hesitation, without being afraid of anyone, no matter where you come from and what religion, caste or home you belong to. Apni family main kuch bora na aaye woh sab na kijiye lekin jo mann main aaye wo kijiye dil thok ke bina dare kisise (Do not do everything that does not belong in your family, but do what your heart says without fear of anyone).”

When asked if Singh would like to include Urfi in his song video, the singer said, “Haan sure agar koi gana badhiya sa bana jisme mujhe low ki woh poora accha nibha sakti hain Toh sure why not? (yes sure if there is a good song in which I think she can perform well, why not?) I wish her all the luck and support.”

Meanwhile, Honey Singh is also in the news for dating model Tina Thadani, with whom he was featured in his recent track Paris Ka Trip. In September 2022, the singer officially divorced his wife Shalini Talwar, whom he had married in 2011. He reportedly gave a huge amount of Rs 1 crore as alimony.

ALSO READ  Urfi Javed admits she wears half-naked outfits for "attention," and defends her fashion choices: "What's wrong with it?"