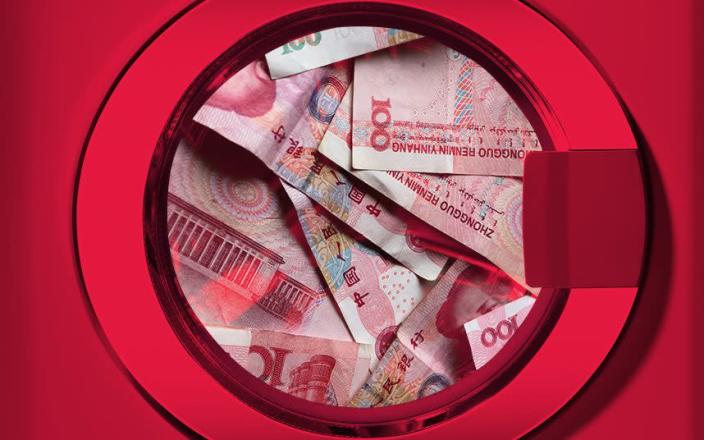 In the wake of the stock market collapse in 2015-16, Beijing enforced tighter capital controls to avert downward pressure on the renminbi – and strengthen Community Party control.

Chinese citizens are not allowed to transfer more than $50,000 (£41,159) out of the country in one year and are only allowed to transfer money less than this for specific purposes. Violators of capital controls risk a fine of up to 30 percent of the currencies involved and, in the most serious cases, criminal prosecution.

It has pushed many citizens on the mainland, as well as students studying abroad, into the hands of organized crime networks that abuse the strict rules to launder black money and generate fees.

Now UK legal professionals are bracing for regulatory action as authorities begin to toughen up payments.

The Solicitors Regulation Authority (SRA) will issue new warnings on how to comply with the regulations in a few weeks, while the UK’s National Crime Agency (NCA) is poised to release more information on how Chinese criminal networks operate in the UK.

As it ramps up enforcement action, the NCA arrested a 33-year-old Chinese national in Teesside last week as part of a major investigation into a suspected money laundering network.

The renewed focus on such organized crime comes as part of a wider fight against illicit money in the wake of the invasion of Ukraine.

Sue Hawley, director of campaign group Spotlight on Corruption, said: “Suddenly there is a major political focus that is increasing the pressure on regulators and law enforcement to show results.

“We know that political mood music shapes and fluctuates where law enforcement officers deploy their resources. There really needs to be some serious thought about the big picture at the level of Chinese money laundering in Britain.”

The NCA first warned city professionals of the growing problem in a report in 2019, warning that China’s underground banking sector could be worth billions of pounds.

The agency describes it as “a form of informal value transfer system”, adding: “It is likely that its prevalence is driven at least in part by the Chinese government’s policies and regulations regarding personal currency transactions and the removal of of capital from China.”

According to the NCA, these criminal organizations often pose as a legitimate money transfer service to lure customers. The gangs accept clean money from Chinese families and offer to move it to Britain and other countries for a fee before depositing the money – often the proceeds of crime – into a British bank account.

Graham Mackenzie, an anti-money laundering expert at the Law Society of Scotland, says the plans pose a “significant and growing threat” and lawyers should remain “vigilant”.

He said: “We continue to review transactions where funds received from China, or from sources with a nexus or other ties to China, follow unusual or questionable transaction patterns or are otherwise not reasonably accounted for.

“Over the past few years, several of our inspections have uncovered activities that are highly suspicious with features of money laundering activity.”

The UK banking sector has warned authorities about a number of cases of individuals being recruited as donkeys to deposit funds.

In 2019, the NCA said Barclays alerted authorities to more than 14,000 compromised accounts, while Santander flagged suspicious cash deposits of up to £57 million into more than 600 student accounts.

In July, Barclays was found to be involved in a case involving ten Chinese nationals who had been convicted in connection with a £20 million money laundering venture. The defendants, who were caught on the bank’s CCTV cameras, used a branch in Belfast to make some large deposits of money.

A Santander spokesperson said: “Fighting financial crime is a priority for Santander. We have advanced processes in place to identify suspicious activity and are pleased to have identified those involved in this case.”

Criminal organizations running the schemes – also known as “Underground Money Shops” – can easily find mule accounts to deposit the money, according to the NCA, often through social media to recruit Chinese students studying in the UK who already have an account.

“It is likely that some students will set up multiple bank accounts at different banks and allow the money laundering group to use or control these accounts for a financial reward,” the agency warned.

“Alternatively, they can transfer control of their accounts to the money laundering group when they return to China after completing their studies.”

It adds that much of the money comes from drug trafficking, cigarette smuggling, organized immigration crime and human trafficking. Investigators found that criminals deposited a total of up to £500,000 in cash and often used banknotes from Scotland and Northern Ireland, which the NCA said was “an indicator that the money likely came from some form of criminal activity”.

Mackenzie says: “It could be normal Chinese citizens who just want to get their money out of China because of the strict political regime, or it could be criminal gangs using alternative money transfer systems to launder money.

“A lot of this then comes to the UK and the amount paid out could be the proceeds of crime.”

For Chinese companies and financial investors, funds can be transferred abroad through official programs, for which they must be eligible.

In light of renewed opposition from the SRA and NCA, legal professionals say they are now bracing for regulatory action.

“There is a lot of educational and support work going on with the industry to raise awareness of these issues,” Mackenzie says.

“We are seeing more cases of this and we are actively investigating and taking disciplinary action as necessary.”

Experts warn that the Chinese government is unlikely to change direction on capital controls anytime soon.

Xi’s strict zero-covid policy has hampered international travel and factory output, leading to a 2.6 percent decline in China’s GDP in the second quarter.

Jonathan Ashworth, an expert on the Chinese economy at Fathom Consulting, says: “Authorities are closely monitoring the capital account at the moment and are concerned about outflows.”

He says Beijing cracked down on cryptocurrency transactions last September to prevent citizens from evading capital controls after it was revealed that some were using bitcoin to evade them.

“It’s kind of like whack-a-mole,” Ashworth adds. “The authorities are always trying to get hold of one scheme and once they’ve dealt with something, people move on to other types of schemes to get money.

“New holes are always being exploited.”