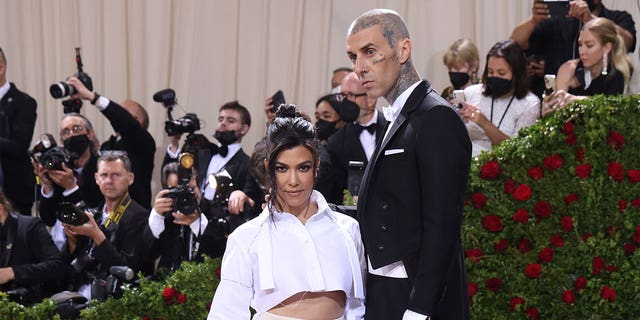 Rumors started circulating that Blink-182 drummer Travis Barker was dating reality star Kourtney Kardashian in 2018, but they met years earlier at the home of “Girls Gone Wild” mogul Joe Francis. Kardashian and Barker had been friends for years leading up to their romantic relationship and officially became Instagram in February 2021. They’ve been packing the PDA ever since.

In October 2021, the couple’s engagement was announced and a handful of wedding ceremonies followed. First, the two had a wedding in Las Vegas after the Grammys in April 2022. Then, in May 2022, they legally married in Santa Barbara, California, and a few weeks later, they had a big wedding in Portofino, Italy, where they were surrounded by their friends. and family.

The Kardashian’s Hulu show “Kardashians” gave viewers more insight into the two’s relationship, including clips from their engagement at the beach in California, their engagement party with their families, and their journey to have a child together.

Travis Barker and Kourtney Kardashian had a wedding in Italy in May 2022.
(Taylor Hill/Getty Images)

Why is Travis Barker famous?

Barker was a drummer for the band Blink-182. He joined the band in 1998 as their replacement drummer and stayed with the band until they split in 2005. Before that he was in a band called “The Aquabats”.

In 2019, Barker started his own record label DTA Records with Elektra Music Group and has released music with many artists including Machine Gun Kelly, Yungblud, Willow, 24kGoldn, Trippie Redd, blackbear and iann dior. Avril Lavigne and Jaden Hossler are both part of the label.

Why is Travis Barker afraid of flying?

In September 2008, Barker was involved in a tragic plane crash that killed his assistant Chris Baker, his security guard Charles Still and the two pilots. The only survivors of the crash were Barker and his best friend Adam Goldstein (DJ AM) who died a year later from a drug overdose.

During takeoff on the flight from South Carolina to California, the small plane’s tires blew, sending the plane past the runway onto the highway where it burst into flames. The entire plane caught fire, but Barker was able to escape by using the emergency exit and sliding down the wing of the plane. Barker was covered in jet fuel and left his body on fire. Goldstein saved Barker by using his shirt to extinguish the flames.

After the crash, Barker was hospitalized for 11 weeks and had to undergo 26 surgeries and skin grafts. 65% of his body was covered with third degree burns. Barker has not flown for more than 10 years after the accident and has spoken about PTSD after the crash. The very first time he flew again was to Cabo in August 2021 with Kourtney Kardashian by his side.

Travis Barker has two children from his relationship with Shanna Moakler, Landon and Alabama Barker. He also has a stepdaughter Atiana Cecilia De La Hoya with whom he still has a close relationship today.
(Phillip Faraone/Getty Images for boohooMAN)

Does Travis Barker have children?

Before his relationship with Kardashian, Barker was married to model Shanna Moakler. The two began dating in 2002 and married in October 2004, but they divorced in 2008. While together, they had two seasons of their own reality show called “Meet the Barkers. Also during their time together, they had two children, Landon Asher Barker, born October 9, 2003 and Alabama Luella Barker, born December 24, 2005.

Through his relationship with Moakler, he also has a stepdaughter named Atiana Cecilia De La Hoya, with whom he has remained close even after his divorce from Moakler.

Ashlyn Messier is a writer for TBEN News Digital.