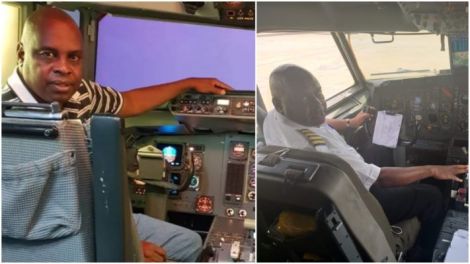 A Kenyan pilot, Patrick Waweru, recalls how he managed to evacuate 180 passengers during an attempted coup in Côte d’Ivoire.

In the 2004 incident, Waweru performed a daring stunt when he decided to rescue 180 people stranded at Homphuet Bogny Airport in Abidjan, Ivory Coast.

Waweru, who was involved in the terrifying coup attempt led by the armed militia, had waited more than 26 hours to be evacuated.

Along with his crew, Waweru decided to take a risk by rescuing 180 passengers, despite fears of being attacked by the militia who planned to dethrone the government.

Waweru even defied aviation rules by flying more than the aircraft’s capacity of 116 people.

Amid terror, the Kenyan airman did the heroic deed despite fears that the plane would be shot down by the armed militia. After almost 24 hours in the air, he landed in Accra, Ghana.

“Anyone who brings war to a community or country is an enemy of the people. That should not happen anywhere in the world,” he said during an interview with Who Owns Kenya?.

The then President of Kenya, Mwai Kibaki, was impressed by Waweru’s heroic act and awarded him a silver star – considered the highest award for bravery in the country.

“It made me feel appreciated, and I realized that whatever I did was not in vain,” he said. Who Owns Kenya?.

His aviation career began in 1994 when he was hired to transport miraa from Nairobi to Somalia.

ALSO READ  How do you get a refund if your flight is cancelled?

Waweru continued to rise through the ranks until he joined Kenya’s flag carrier. He was tasked with making sure pilots adhered to strict regulations.

“Imagine, how do you live in a situation where you left something to go and a plane crashes? How do you feel about that?” Waweru posed.

Captain Patrick Waweru during an interview with Who Owns Kenya