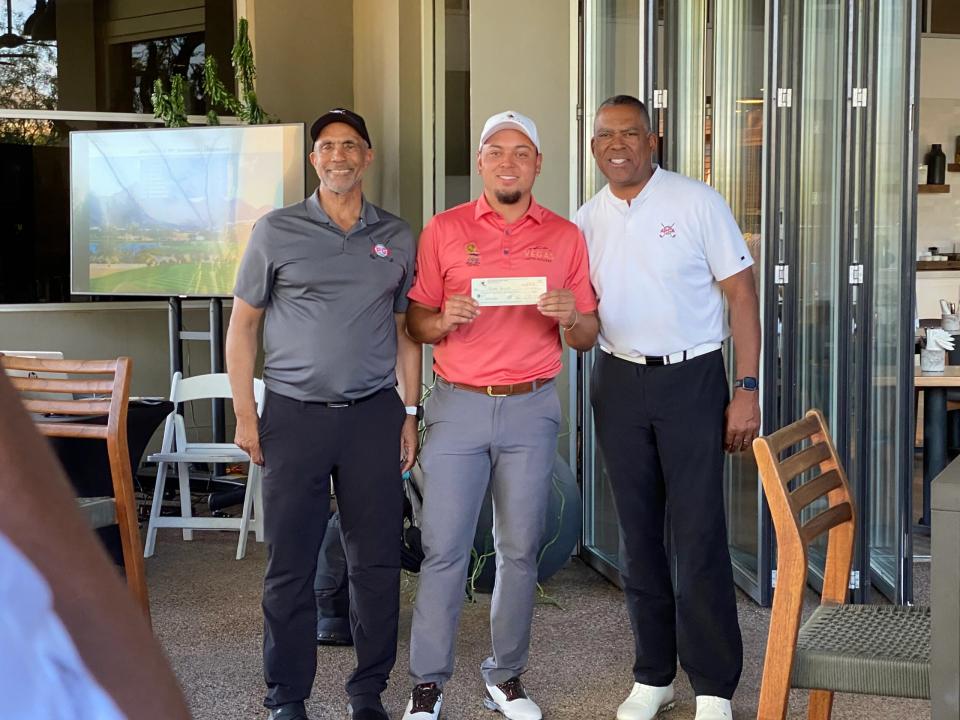 LA JOLLA, Calif. – Michael Herrera makes his PGA Tour debut today at the Farmers Insurance Open in Torrey Pines. It is the course where he first attended a tournament and watched Tiger Woods.

Herrera’s local-boy-makes-good story is easy to love, but that barely scratches the surface of his story in golf. It turns out that there is much more to Herrera’s story.

He played in Cedric the Entertainer’s Celebrity Golf Classic, a charity golf tournament, and Herrera was stationed at a tee box on a par 5 to make drives for the various teams. Hall of Fame defensive back lott for the San Francisco 49ers, Lott and his group couldn’t believe the sound one of Herrera’s drives made and the distance it traveled. Lott recalls the moments that followed in cinematic detail.

“It was that moment where I thought, hey, boy, come talk to me, I want to know your story,” Lott recalled during a telephone interview.

Runner-up Michael Herrera on the fairway at number 17 during the final round of the 2022 John Shippen National Invitational at Detroit Golf Club. (Kirthmon F. Dozier/Detroit Free Press)

Herrera, 24, told Lott about his childhood in Moreno Valley, California, not far from where Lott grew up (in Rialto), and how he gave up basketball, where he averaged more than 20 points per game in high school, to make it as a professional golfer. Lott was impressed and asked, “How are you paying for this? Who’s helping you?”

“No one,” said Herrera, who worked part-time in a golf course’s cart shed to pay tournament entry fees. “It’s just me and my daddy. We split everything.”

Lott couldn’t help but think of the shoulders that had helped him climb to such heights—Harry Edwards, the American sociologist and civil rights activist, and Charlie Young, former USC football star and 13-year NFL veteran—and was moved to to do something he had never done before.

ALSO READ  'We Had a Rhino Attacking Us': Danielle Kang's Pursuit of Normality Leads to African Adventure

Lott and Herrera exchanged numbers that day. Little did he realize that one of the greatest football players ever was about to take him under his wing.

“I had to look him up and then I thought, ‘Wow, he’s amazing,'” Herrera said. Less than two weeks later, Lott called and asked a very direct question: “How much do you need for the rest of the year?”

“That’s how it all started,” Herrera said. “I gave him a number and he said, ‘Okay,’ and he sent me the Tracy Toyota logo (from the car dealership Lott owns) to get some shirts and hats made, along with a check. It was such a relief. I play so much more freely now.”

Runner-up Michael Herrera hits from the 18th tee during the final round of the 2022 John Shippen National Invitational at Detroit Golf Club. (Photo by Kirthmon F. Dozier/Detroit Free Press)

Lott also put Herrera in touch with agent Sandy Sandoval, whose clients include Patrick Reed, and helped him add a slew of logos to his shirt.

After every tournament round, Herrera texts Lott a report and Lott always asks, “What do you have to do to get better?” One of Lott’s pieces of advice stuck with Herrera is to be in the moment and be thankful for the moment.

“He pushes me,” Herrera said. “To know that he is an athlete and knows what it takes to make it is huge. He’s a great support system.

Herrera’s support system extends beyond Lott to Allison Keller, the chief administrator of the PGA Tour, who has hosted him at tournaments in the Jacksonville, Florida area, and burst into tears when Herrera and fellow APGA pro Joseph Dent sent “a sweet note” and left Starbucks. thank you card.

“He’s got personality plus,” she said. “I think he’s going to make it in golf, but if he doesn’t, I’d love to hire him on the PGA Tour.”

The truth is that Herrera’s first love is basketball. He says he was a good point guard to play Division I in college but didn’t have the numbers.

“UC Irvine wanted me,” he said.

He eventually played hoops at Riverside City College until basketball coach Phil Mathews took a closer look at his golfing skills. Mathews saw raw promise and he put Herrera down and told him he could keep playing basketball, but he wasn’t going to get good at it. But he could be great at golf.

Mathews said he would cut Herrera for his own good, and introduced him to Advocates Pro Golf Association founder Ken Bentley, his former college roommate. After Bentley, a former Nestle executive, played a round with Herrera at Wilshire Country Club, he offered him a spot in an APGA Tour event as an amateur, and Herrera achieved a top-10 finish. With the encouragement of veteran pro Kevin Hall, who played college golf at Ohio State and told Herrera he had enough game to chase his dream, Herrera turned pro in 2019.

“My game was piling up and I was like, man, maybe there’s something here,” he said.

He enjoyed his best year yet in 2022, including his first APGA win in April when he made a birdie at TPC Scottsdale at age 18 and won by one strike. (He flamed out on the second leg of the Korn Ferry Tour Q-School and has only conditional status on the PGA Tour Latinoamerica and PGA Tour Canada this season.) It was Mathews who had the privilege of informing his former player that he was a PGA Tour exemption at Torrey Pines.

“It would be great to get a waiver for any event just to see where my game is at that level,” Herrera said before receiving news of his Farmers start.

As a child, Herrera drove past Cottonwood Golf Center, a nine-hole, 1,226-yard, par-28 municipal course in his hometown on his way to the mall and to basketball practice. He remembers seeing all that grass and begging his father, Hugo, who emigrated from Guatemala as a teenager, to take him there.

“Golf is a sport for rich men,” said his father.

But at age 10, after seemingly 100e time he asked to go to the golf course, his father finally gave in and they started the game together. There were tears of joy when Herrera broke the news to his father that he would be playing the likes of Jon Rahm, Justin Thomas and Collin Morikawa in the Farmers Insurance Open.

That he has come this far is all the more remarkable considering that Herrera never had a coach until his second year as a pro. His clubs were bought by the ton at a Roger Dunn Golf Shop. Thanks to the APGA, he was club fit by Callaway and received professional instruction. He is a late bloomer, but Lott believes the best is yet to come.

“I tell him to keep grinding and I hope he keeps dreaming,” said Lott. “I have something I live by — exhaust every moment. And I like the fact that that’s what I see with Michael. He is exhausting every moment. And you know, that’s all you can ask of a human being.”