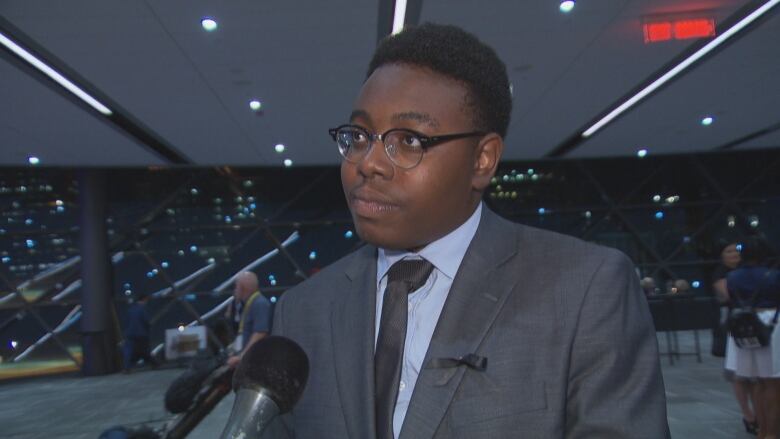 It was the YouTube videos of conservative leader Pierre Poilievre that caught the attention of Joshua Deslandes, a University of Toronto student studying economics and political science.

“I bought a membership and I’m really just doing it, meeting MPs, talking to people, and it was just a lot of fun.”

Deslandes is one of the newest members of the Conservative Party of Canada – a young person of color who says he was drawn to a positive message about the future.

Poilievre became the new leader last week after securing two-thirds of the vote – a level of party support that even former Conservative Prime Minister Stephen Harper did not enjoy.

Tina Park, a lecturer in Canadian nationalism at the University of Toronto, said Poilievre’s appeal among younger voters is driven in part by his social media and communication strategies — and by the fact that he is a relatively young face in Canadian politics.

“If you listen to his speeches, it’s very direct, very simple and very recognizable to young people who are struggling with inflation problems, who are unable to buy a house because things are just too expensive for them,” Park said. .

“Some of his posts are very extreme, to be honest, but in a way that satisfies a certain hunger of the Canadian public for a change and an alternative kind of vision that could move them forward and help them plan. of a new future.”

Park said that as Canadians struggle with inflation due to the pandemic and global supply chain problems, many are being forced to cut spending.

“Because of the economic pressures they face, we as humans always tend to go the other way if you think the current system isn’t working for you,” she said. “Especially the younger people in their thirties who want to start a family and then move on to the next stage in their lives, [they] find a new kind of vision in Mr. Poilievre.”

Park said that while the Conservative Party sees a diverse group of young people joining, it has always had a core group of BIPOC members (black, indigenous and colored people), especially recent immigrants.

Sufiyan Master, a 21-year-old from Montreal and a new member of the Conservative Party, said he had only recently seen himself in the party.

“As the Muslim son of an immigrant, we always leaned towards the Liberal Party. It was just something that felt like home – it felt like it represented our values. But I think we as minorities, we have this misconception, a misunderstanding of the different visions that different parties can bring to the table and offer.

“Right now it’s about thinking about Canada’s future and how it’s handled the past few years. Obviously, not many people agree with what’s happened.”

As more BIPOC individuals join the party, that new diversity will help attract others as well, said Aderoju Alao, director of communications for the Association of Black Conservatives.

“For black people, it seems like we finally have a chance at the table [to] let our voices be heard,” she said.

Alao, who is based in Edmonton, said her group has seen more BIPOC and young people interested in conservative parties across the country.

Conservatives have also reached out to minority communities and recent immigrants and with policies designed just for them, she said.

“It could be better, but they are doing everything they can to ensure they reach as many different populations as possible that exist in their regions,” Alao said.

“In the past – and I am not saying this categorically – given the history of the Conservative Party, there has been a public belief that the BIPOC community cannot be represented in the Conservatives. But we are entering a new era.”

Jeff Yang, 31, said he sees that happening. He once considered himself a liberal – he even campaigned for Justin Trudeau when he was in his twenties.

More recently, Yang, who works in the financial services industry in Toronto, has campaigned for Poilievre. He said he has noticed that many young people he speaks with are now interested in the conservatives.

“I saw this for Mr Trudeau’s campaign when he first ran for prime minister. There was a lot of youth support for the Liberal MP candidates,” he said.

“It says to you that this party has a lot of ground and grassroots support and it gives it a good chance of winning an election.

VIEW | Why these BIPOC youth say they are attracted to the conservatives:

Why These BIPOC Youth Are Attracted To The Conservatives

At the recent convention in Ottawa, three young people talk about why they decided to join the Conservative Party.