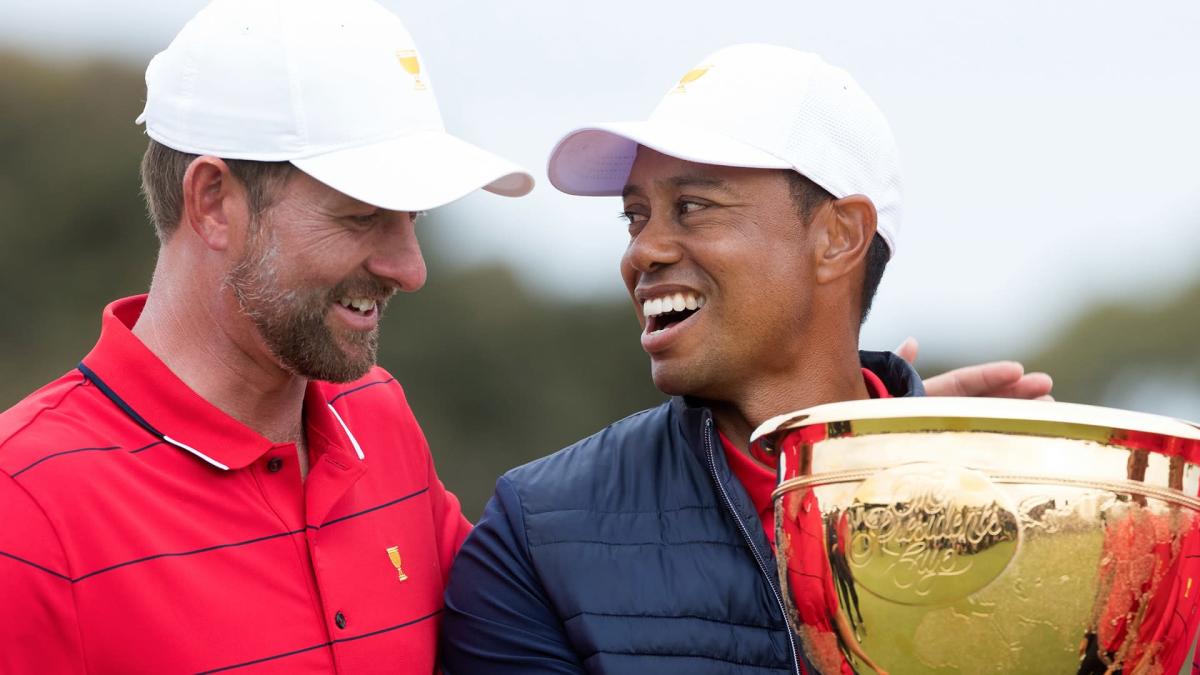 Before Davis Love III even called him up, Webb Simpson knew he was going to be an assistant President Cup captain — or so he thought.

He can thank Tiger Woods for that.

As Simpson tells it, last Tuesday he was out for dinner in Wilmington, North Carolina, with his family at their favorite hot dog joint, Trolley Stop. Admittedly, Simpson was a little stressed; his children annoyed the owner of the restaurant by constantly opening the door, and Simpson had to not only rush them, but also order.

“I looked down and it’s Tiger,” Simpson recalled at the Wyndham Championship on Tuesday. “I told Tiger to call him back, I could order my hot dogs. So, order my hot dogs, get out of there, call him back and yes, he referred to me living in Charlotte, [this year’s President Cup venue] Quail Hollow is my home, which he thought would bring a lot to the team.

The next day in Detroit, Simpson ran into Zach Johnson, already one of Captain Love’s assistants, and confirmed what Woods had shared. They laughed at the story of Woods ruining the surprise, and the next night Love finally got the official word, welcoming Simpson to the US team (Steve Stricker was mentioned along with Simpson).

For Simpson it was an honor to accept the job. He’d been thinking about this year’s games at Quail Hollow for so long, he said, and with only one top-10 since last year’s Wyndham, his chances of making the 12-man roster as a player were nil.

“Not that I was afraid not to be a part of it, but there was a part of me that was like, if I don’t make the team and Davis goes in a different direction, that’s fine, but it’s going to be hard to get the Presidents. Cup happens there and somehow isn’t part of it,” Simpson said. “So, I was really, really relieved to have the chance to be a part of it.”

The 36-year-old Simpson, who has played in three Ryder and Presidents cups each, also shared a story about his debut in the US team at the 2011 Presidents Cup in Royal Melbourne, where Captain Jim Furyk shared some wisdom with him: ” When you finish your golf career, you really start to look back and remember your victories and team events.”

“So far,” Simpson continued, “those are the best memories I’ve made in the game, the three Ryder Cups and President Cups. So I’m super excited to be next to Davis, Zach, Strick and Freddie [Couples]. … I know those guys well, been around them for a long time. I don’t feel much older than the guys that come on the team because I’ve been playing with them for so long, but I think some of them, like Scottie [Scheffler]”I’m a lot older than that.”

Simpson kicks off the regular season finale in Greensboro, North Carolina, this week with number 117 in FedExCup points. He’s likely to be in next week’s playoff opener in Memphis, but with only the top 70 advancing to the BMW championship, Simpson may have plenty of time to prepare.

On the other hand, Simpson could take a few wins and shock the world by reaching East Lake and potentially forcing Love’s hand for a captaincy pick.

“I’m looking forward to that captain’s call to see who to choose,” Simpson said. “If I’m even in the race it could be funny/clumsy if I nominated myself for a pick, so we’ll see.”

LIV Golfers v. PGA Tour abort as they tee off in federal court