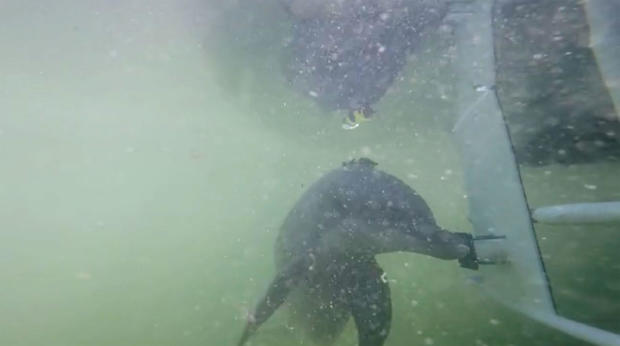 (CNN) — A study has found that dolphins can’t communicate as effectively when exposed to human-made sounds, forcing them to change their sound, just as humans do when they scream.

An international team of researchers from the University of Bristol, the Dolphin Research Centre, Syracuse University, the Woods Hole Oceanographic Institution, Aarhus University and the University of St Andrews collaborated on the research, which was published Thursday in Current. Biology.

“We wanted to investigate how noise affects animal cooperation,” said Pernille Sørensen, first author of the paper and PhD student at the University of Bristol, in an interview with CNN. “So basically looking at the entire communications network, from a sender to a receiver and whether there’s any impact on that transmission.”

Previous studies have documented the detrimental impact that noise pollution can have on other aquatic mammals, such as whales. The constant noise from ship engines and military sonar makes it difficult for marine mammals to communicate with each other and has been linked to increasing whale-ship collisions.

The researchers focused on dolphins because the aquatic creatures are highly social and intelligent, using whistles to communicate with each other and clicking to echolocate and hunt. And sound communication is especially crucial for underwater animals, because below the water’s surface, “sound travels very far and very fast,” Sørensen said.

In addition, dolphins have a “broad vocal repertoire” that they use “for virtually all aspects of their lives, including coordinating cooperative behavior.”

To understand how noise pollution affects dolphins’ ability to cooperate, the scientists worked with two specific dolphins named Delta and Reese who live at the Dolphin Research Center in Florida. The dolphins had a mission: they all had to press an underwater button at the same time. The dolphins were asked to perform the task under both ambient noise and four “sound treatments” designed to simulate underwater noise pollution caused by humans. A total of 200 trials were performed on the dolphin pair, with each dolphin wearing an acoustic tag that recorded its sound production.

The findings were twofold, Sørensen said. First, they found that the dolphins used “compensatory mechanisms” to make up for their hindered vocal communication. As the underwater sound increased, they made louder and longer sounds and changed their body language to look at each other.

But the main finding, according to Sørensen, was that despite their attempts to compensate for the noise pollution, the dolphins were still less successful in completing the task. Their pass rate dropped from 85% to 62.5% from the lowest to the highest noise levels.

ALSO READ  Researchers implanted mini-human brains into mice, and they respond to light

“To our knowledge, we show for the first time that animals working together are affected and that compensatory mechanisms are insufficient to overcome the effects of noise,” she explains.

This could have real implications for dolphins in the wild, which rely on cooperation to forage and reproduce. “They need sound to connect,” she said.

Sørensen added that the researchers “definitely would have loved to introduce or include more dolphins in our experiment” and that future experiments could expand the sample size to include a larger group of dolphins.

In addition, more research is needed on the specific types of whistles and sounds dolphins use for collaborative tasks.

“This research certainly adds to our knowledge about how noise pollution affects animals,” says Sørensen.

She said she hopes the research helps support “solutions for how we can better control noise in our oceans.”