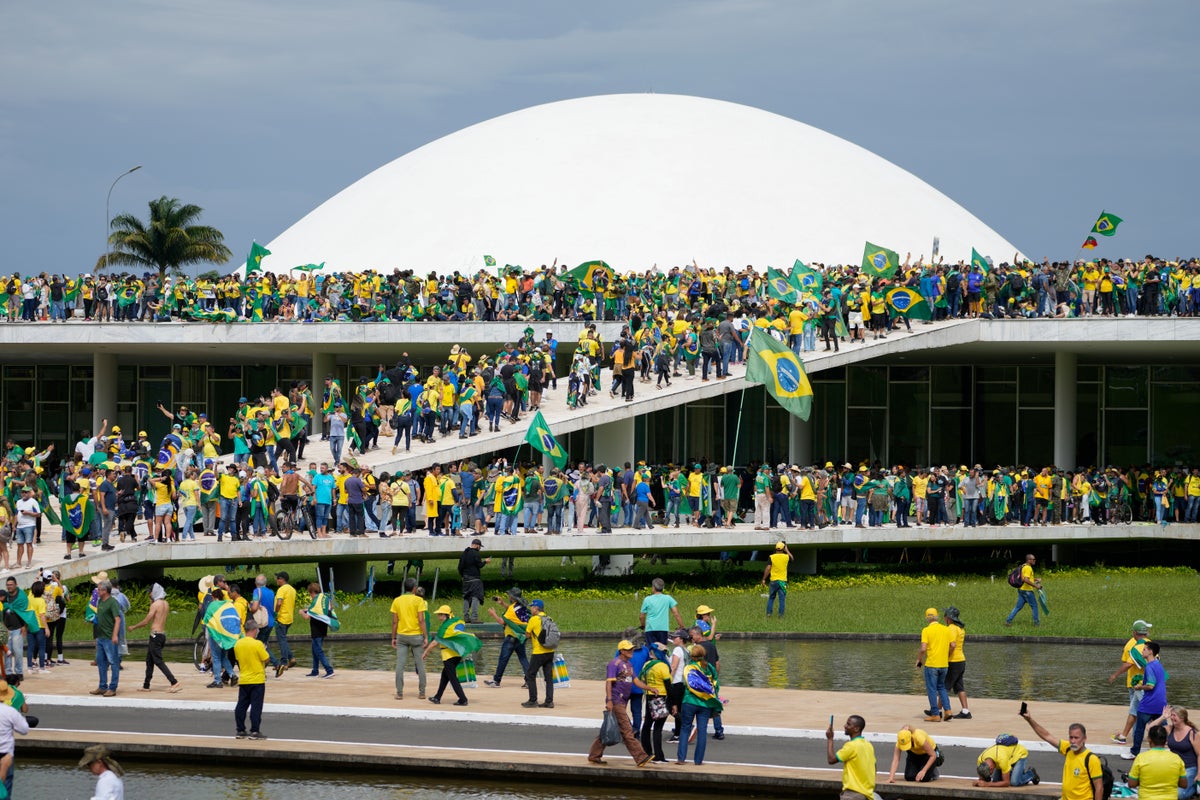 Supporters of former Brazilian President Jair Bolsonaro stormed the National Congress, Supreme Court and presidential palace in the capital Brasilia on Sunday, in a grim echo of the U.S. Capitol uprising almost exactly two years ago.

More than 300 people have been arrested so far after the invasion as police drove rioters from government buildings.

There are no reports yet of any deaths or serious injuries in the violence, but videos on social media show a trail of destruction with many supporters engaging in bloody clashes with initially outnumbered police.

It came just a week after the inauguration of Bolsonaro’s leftist rival, President Luiz Inacio Lula da Silva, who said rioters will be found and punished with the “full force of the law”.

Bolsonaro denied any involvement in the attack, calling any suggestion otherwise a “baseless” accusation.

At least 300 people have been arrested after pro-Bolsonaro supporters stormed key government buildings in Brazil’s capital.

Brazil’s police have revised the number of arrests to 300 after Brasília’s governor Ibaneis Rocha previously said about 400 protesters had been arrested.

It comes after an estimated 3,000 people broke into government buildings, chanted slogans and smashed furniture.

Biden said he looks forward to continuing to work with leftist President Luiz Inacio Lula da Silva, who last year defeated Bolsonaro in one of the most polarized elections in a generation in the country.

“I condemn the attack on democracy and the peaceful transfer of power in Brazil. Brazil’s democratic institutions have our full support and the will of the Brazilian people must not be undermined,” Biden tweeted.

“I condemn today’s attack on Brazil’s democratic institutions. The will of the Brazilian people and the country’s institutions must be respected. I have every confidence that it will be. Brazil is a great democratic country,” said UN Secretary-General Antonio Guterres.

“The violent attempts to undermine democracy in Brazil are unjustifiable. President @LulaOficial and the government of Brazil have the full support of the UK,” said British Foreign Secretary James Cleverly.

“The attempted coup by the Brazilian conservatives, instigated by the leadership of the oligarchic power, their spokesmen and zealots, is reprehensible and undemocratic. Lula is not alone, he has the support of the progressive forces of his country, Mexico, the Americas and the world,” said Mexican President Andres Manuel Lopez Obradar.

A Conservative candidate loses his reelection and attacks the integrity of the electoral system while refusing to fully admit defeat as many of the candidate’s supporters protest and storm the capital.

So far, despite the many parallels to the January 6 uprising, Trump has refrained from commenting on the siege in Brazil, writes Josh Marcus.

Jair Bolsonaro has condemned “looting and invasion of public buildings” after hundreds of his supporters raided the Congress, Presidential Palace and Supreme Court.

Bolsonaro rejected what he called newly elected president Luiz Inácio Lula da Silva’s “baseless” allegations that he had instigated the invasion of the seat of power in Brasilia.

The ex-president – who left Brazil for the US state of Florida on the penultimate day of his term last month – also defended the right to “peaceful protests” on Twitter.

“Peaceful demonstrations, in the form of law, are part of democracy. But looting and invasions of public buildings such as those that took place today, as well as those by the left in 2013 and 2017, are out of the question,” Bolsenaro wrote on Twitter in Portuguese. “During my tenure, I have always kept within the four lines of the Constitution and respected and defended laws, democracy, transparency and our sacred freedom.”

“In addition, I reject, without evidence, the allegations attributed to me by Brazil’s current CEO,” he added.

Brazilian President Luiz Inácio Lula da Silva visited the wreckage of his presidential palace after thousands of supporters of former President Jair Bolsonaro stormed the country’s democratic institutions, including the Capitol and Supreme Court, in a failed attempt to overthrow his week-old government. to overthrow.

While visiting the wreckage, Lula declared a federal security intervention in Brasilia and vowed that “all those involved will be punished”.

He called the rioters “fascists, fanatics” and said they would be punished “with the full force of the law”.

The federal intervention in Brasilia will last until January 31, he added in a speech.

Mr. Lula was far from the capital, on an official trip to the state of Sao Paulo, when the attack took place.

Lula held the former president responsible for inciting the crowd, saying there were several speeches by Bolsonaro encouraging the storming.

Mr Bolsonaro, who has hardly spoken publicly since losing the election, had left Brazil for Florida 48 hours before the end of his mandate and was absent from Mr Lula’s inauguration. However, he has repeatedly made unfounded allegations of fraud in Brazil’s presidential elections.

In one clip, that’s a lone policeman on horseback pulled from his horse as they were hit by rioters armed with long wooden sticks, waving Brazilian flags and dressed in the country’s famous yellow football strip.

The mob continues to beat the police officer as he sinks into his saddle and falls to the ground in the 18-second clip posted by police Eixo Politico news site.

Supporters of Brazil’s former far-right president Jair Bolsonaro raided the Supreme Court and Congress building and surrounded the presidential palace in Brasilia in a grim echo of the U.S. Capitol uprising almost exactly two years ago.

Local media estimate the involvement of about 3,000 people.

There are no reports yet of any deaths or serious injuries in the violence, but videos on social media showed a trail of destruction, with many supporters engaging in bloody clashes with police who were initially outnumbered.

Lula’s predecessor repeatedly, without evidence, questioned the credibility of the country’s electronic voting system, with many of his hard-core supporters believing him and protesting the election results.

Supporters of former Brazilian President Jair Bolsonaro who refuse to accept his electoral defeat have stormed Congress, the Supreme Court and the Presidential Palace just a week after the inauguration of his leftist rival, President Luiz Inácio Lula da Silva