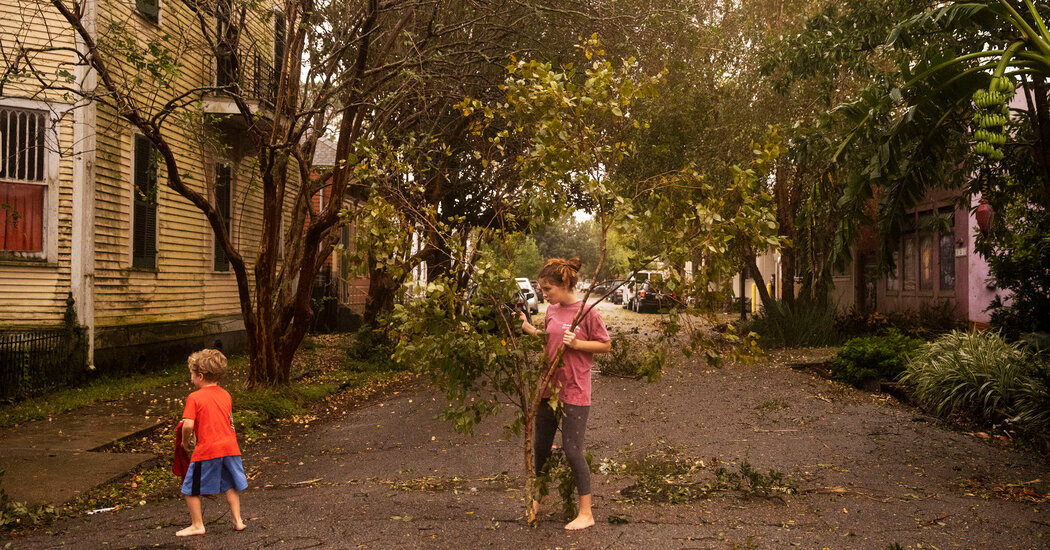 SLIDELL, La. – Hundreds of thousands of people were without power in the southern states on Thursday as Hurricane Zeta hit the region with powerful winds, destroying homes and businesses and chopping down trees.

The storm moved quickly, hitting the Louisiana coast as a Category 2 hurricane on Wednesday afternoon. By the end of the night, coast officials had already started to assess the extent of the damage and deploy workers to start restoring power.

But as of Thursday morning, about 400,000 customers in Louisiana were without power, according to Entergy Louisiana, while at least 600,000 in Georgia, 494,000 in Alabama and more than 83,000 in Mississippi were also without power.

Zeta had weakened to a tropical storm with maximum sustained winds of 60 miles per hour, and was about 50 miles west of Asheville, NC Zeta was forecast to heading into the mid-Atlantic states in the afternoon and then into the Atlantic Ocean at night, producing up to three inches of rain across the region.

ALSO READ  Amazon to hire at least 3,000 workers in Michigan due to online surge

Zeta had hit coastal areas with several feet of storm surge, but much of his anger came from strong winds. In New Orleans, the storm left a dark city. Local journalists shared images on social media showing the French Quarter devoid of light and life. The storm also triggered flooding in Louisiana and Mississippi.

“We definitely did it,” Mayor LaToya Cantrell said in a briefing Wednesday night.

At least three deaths have been attributed to the storm. Authorities said a man was electrocuted by a downed power line in Louisiana on Wednesday after another man likely drowned in Biloxi, Mississippi, late at night. And early Thursday, a man died in Cherokee County, Georgia, when a tree has fallen on a mobile home.

Officials have warned residents of the dangers that persist after the storm and urged them to avoid going out too early.

“Please leave it – please leave it to – public safety officials to deal with the damage caused by Hurricane Zeta,” Ms. Cantrell said. “We don’t want to lose another life. It’s useless. “

Zeta pounded an area that had been left hampered and exhausted by a long and grueling season that has been one of the busiest in over a decade. It was the fifth named storm to hit Louisiana this year, and the 27th so far in the Atlantic season.

The storm intensified in the last hours before it landed, almost becoming a Category 3 storm. Yet the region benefited from Zeta’s rapid pace of around 20 mph, meaning communities in its path were spared the floods caused by previous storms which had been much slower.

Zeta made landfall around 4 p.m. local time in Cocodrie, Louisiana, a small fishing village in the constellation of Coastal Islands southwest of New Orleans in the parish of Terrebonne. He then pushed northeast toward New Orleans, where authorities said by the end of Wednesday more than 200 trees had already been felled.

A dark city had made it difficult to take stock of the full impact of the storm overnight. “There are still a lot of unknowns,” said Collin Arnold, director of the New Orleans office of homeland security and emergency preparedness, on Wednesday evening.

But the locals knew enough to find some relief. In a city haunted by the deadly and devastating floods of Hurricane Katrina, major flooding was once again feared. But officials said the flooding on Wednesday evening was confined to the streets and had not affected homes, businesses or other structures.

Zeta also swept through Mississippi, where Gov. Tate Reeves said Wednesday evening that President Trump had approved a state disaster declaration, the second this month for Mississippi, which was also hit by the hurricane. Delta.

There have been reports of winds of around 100 mph lashing in coastal towns, including Gulfport, and flooding in Biloxi. Local television stations broadcast footage of cars floating in a water covered parking lot at one of the casinos perched along Biloxi Bay.

What you need to know now about travel insurance