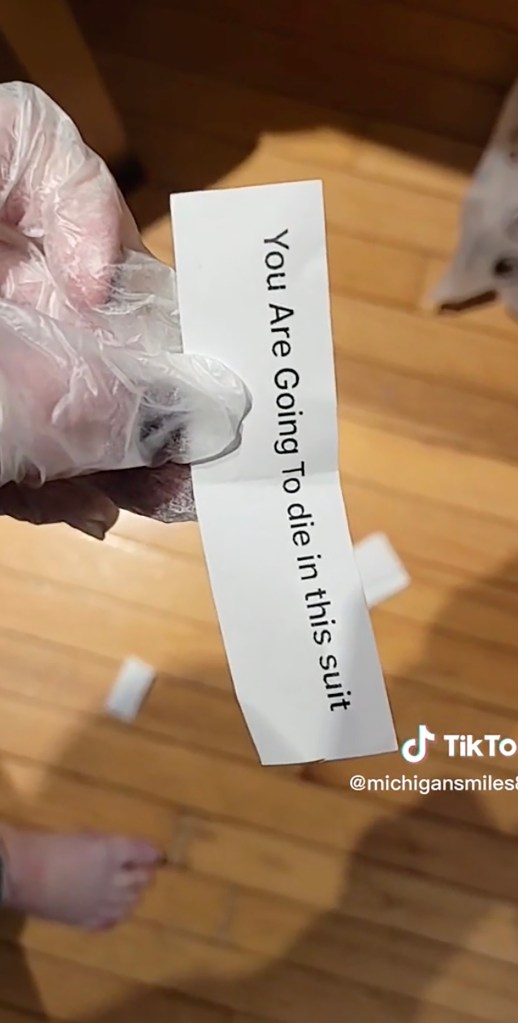 You want to look stunning when a new dress arrives – not be told you’re going to drop dead.

A Michigan mom was shocked when she opened her order from fast-fashion company Shein, expecting to find her new dress.

Instead, she found a sinister note telling her she was going to die.

Amanda Ellis, 38, documented the disturbing moment after she received the disturbing notes on TikTok, showing off the six separate pieces of paper that fell out, all of which read, “You’re going to die in the suit.”

Ellis said she immediately washed her hands and put on gloves, but was concerned about the meaning of the notes.

“little worried, [it’s] kinda creepy,” she said in the video, which has been viewed more than 6 million times.

“I will not wear or try on this dress,” she continued. “I even called the local police.”

In a follow-up video, Ellis said she “went into an extreme panic” after finding the notes.

“I have ordered from them countless times. I’ve never had a problem,” she wrote in a comment. “This drove me crazy.”

“I don’t know if I will buy from them again,” she added.

A spokesperson for Shein told The Post they are investigating the claim.

“[We] have contacted this customer for more information,” they said.

Ellis said she is awaiting a response from a Shein supervisor on the situation.

Commentators were shocked by the woman’s experience, some suggesting it was a “weird prank” someone had done when returning the item.

“The workers were probably just bored in the factory,” one user suggested.

“Maybe it’s a warning about the chemicals in the dress?” wrote one follower, citing claims that Shein exceeds chemical limits. “That’s so scary.”

Shein has previously come under fire over a viral conspiracy theory that workers hid “Help Me” messages in clothing.

Shein said the text on the tags that read “Need help” was only to inform customers to use fabric softener.

“Recently, several videos have been posted on Tik Tok that contain misleading and incorrect information about SHEIN. We want to make it very clear that we take supply chain issues seriously,” a Shein spokesperson said in a statement at the time. “Our strict Code of Conduct prohibits suppliers from using child or forced labor and we will not tolerate non-compliance.”