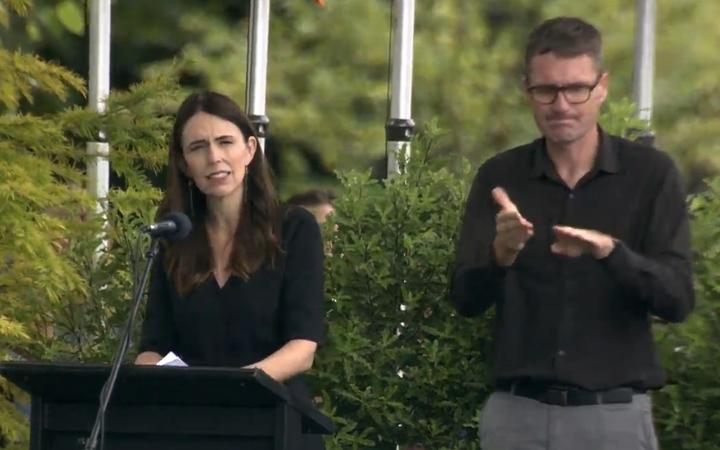 Prime Minister Jacinda Ardern remembers those who died in the Christchurch earthquake and speaks to survivors of hope and optimism.

In his speech, Ardern said today is a chance to remember those who have died and “stand with the families, loved ones and friends who mourn them.”

This is the time to remember and celebrate those who have died – “the joy they brought, the memories created, the life they lived”.

She said that 10 years on people would still live their daily lives “with the shadow of this day”.

Ardern said Christchurch had faced the devastation caused by the disaster, but “New Zealand was shaken by the events of February 22”.

“Today I want to take this opportunity to tell everyone who still feels overwhelmed, uncertain, sad, tired or anxious – you survived an event that by right should not have happened during your lifetime. no one.

“I hope you find the space to be kind to yourself, as you have no doubt been to other people who you knew carried the same burden.

“Our flags fly at half mast for them too today.”

In the years following the earthquake, Ardern recalled how the country rallied around Canterbury.

“We all felt the enormity of what had happened so deeply.

“This is the Kiwi way of being stoic, and sometimes the pressure to ‘be good’ or to have ‘moved on’ over time can be very pronounced.”

But, she said, even though the healing would take time, no one would forget.

Learn more about the 10th anniversary of the Christchurch earthquake:

“I would like to pay tribute to the children who lived through the earthquake and who grew up in its aftermath.

“I called it the rebuilding generation in the past.”

But, she said, they would also be the “generation that will create a legacy”.

Ardern recognizes Canterbury professionals like educators, mental health specialists, occupational therapists, social workers who have all come together to design a program to support these children.

“You have made a huge difference and now this program is now going to be rolled out across New Zealand. I hope that from such a traumatic time for our children a form of comfort and support for a whole generation will develop. “

The Prime Minister also paid tribute to those who were part of the relief effort, including emergency service personnel, the Mayor of Christchurch and city councilors, ministers, international diplomats, family and friends of all involved persons. She has appreciated the support of the Quake Families Trust over the past decade.

“It’s been an extremely difficult decade for this city – at times I’m sure it felt impossible,” Ardern said.

“But as we look to the decade ahead, I see hope, energy and optimism, and I see Christchurch taking its rightful place among New Zealand’s best and brightest cities. . “

She ended her speech with an excerpt from a poem by Helen Lowe, from Leaving the Red Zone, an anthology of Earthquake poetry.

The poem is titled Sparrows and talks about the absence of birds in the city after the earthquake.

“I threw old bread on the grass isle in our own gray sea and waited … and waited. And then, finally, they came with their wings darkening the sun.”

Visa for Green MP’s partner ‘like the others’, according to Immigration NZ