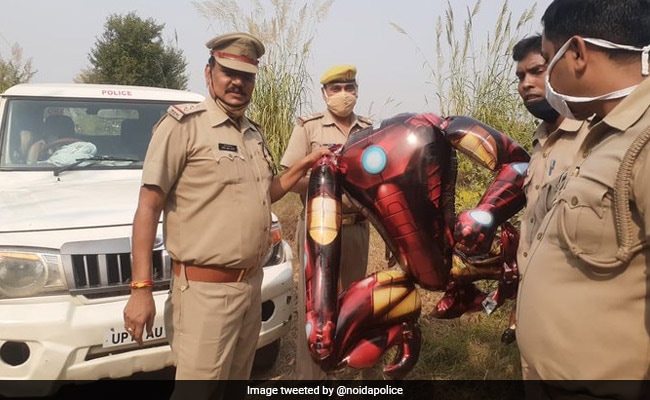 Police said the reason for the anxiety among people was the unusual shape of the balloon.

A balloon shaped like a fictional Iron Man cartoon character dropped into the sky raised fears of an alien invasion among residents of the town of Dankaur in Greater Noida, Uttar Pradesh, police said.

The gas-filled balloon, which resembled a robot due to its Iron Man structure, was spotted over the city early on Saturday morning, which then landed in a canal near the village of Bhatta Parsaul. A crowd gathered there to see what some of them believed to be “an alien,” officials said.

ALSO READ  NCB is tightening the screws on drug cartels, next target?

“It was an air-filled balloon that had gone up in the sky and later descended and got stuck in the bushes along the canal. Part of the balloon was touching the water flowing in the canal that had led the balloon to shake a Unbeknownst to the spectators, it made an anxious watch, ”said Dankaur Police Chief Anil Kumar Pandey.

He said the unusual shape of the balloon was one of the main reasons for anxiety among people.

“He was in the form of Iron Man (fictional superhero character) given his color and design. It was an unusual sight, so some people even thought he was an alien, or something. like that, and were concerned, ”Pandey added.

The official said the balloon, which had to go down because it ran out of gas, was fished around noon from the canal.

ALSO READ  FIR filed a complaint against Rahul, Priyanka Gandhi for violation of Article 144 on the way to Hathras

There was nothing harmful in the object, but it is not yet known who released it into the air, the official said.

The India-United States partnership has grown in all areas: Ministry of Foreign Affairs