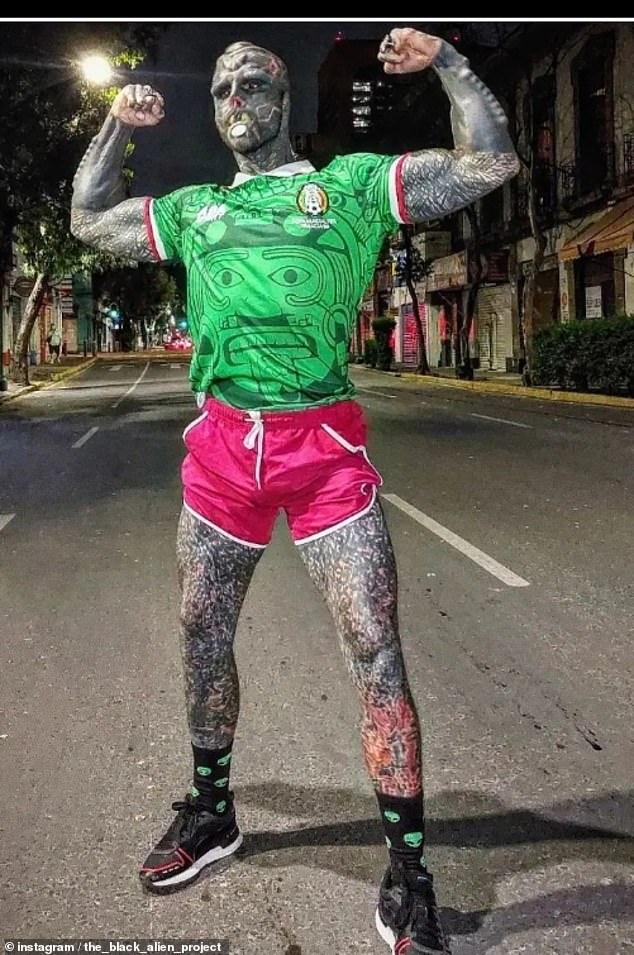 A man who underwent extreme body modification procedures to look like a ‘black alien’ revealed he can no longer eat in restaurants.

Anthony Loffredo, 33, from France dreams of becoming a “black alien” and has had his body undergo several procedures to remove his ears, nostrils and some of his fingers to achieve the look.

Speaking to LadBible TV, the Frenchman admitted that his extreme appearance has earned him some criticism and that local restaurants will no longer serve him on the terrace.

Anthony, who started body modification because he felt he was born in a body he didn’t belong in, said he had to make peace with people who are “narrow-minded.”

Anthony Loffredo, 33, from France dreams of becoming a “black alien” and has had his body undergo several procedures to remove his ears, nostrils and some of his fingers to achieve the look. He said some restaurants will no longer serve him on their patios

“Sometimes when I want to eat at a restaurant, the server says I can’t eat on the patio,” said the Alien wannabe.

He added that changing his body to look more Alien-like has boosted his confidence, saying, “There are people who thanked me because they feel safer now. That the looks they get from other people don’t bother them anymore.’

Anthony has already covered his body – including his eyeballs – with tattoos and removed his nose and upper lip in his attempt to look like a “black alien.”

He has admitted in the past that his appearance made it difficult to find work. 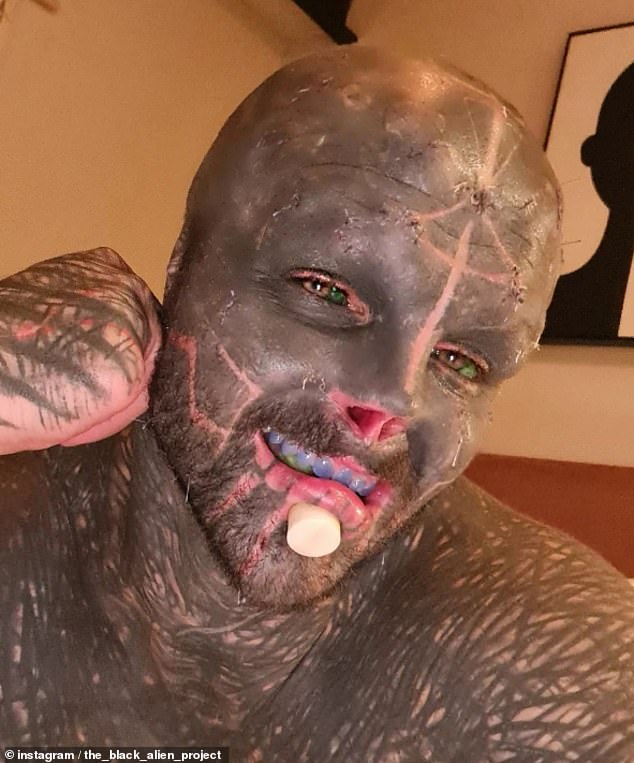 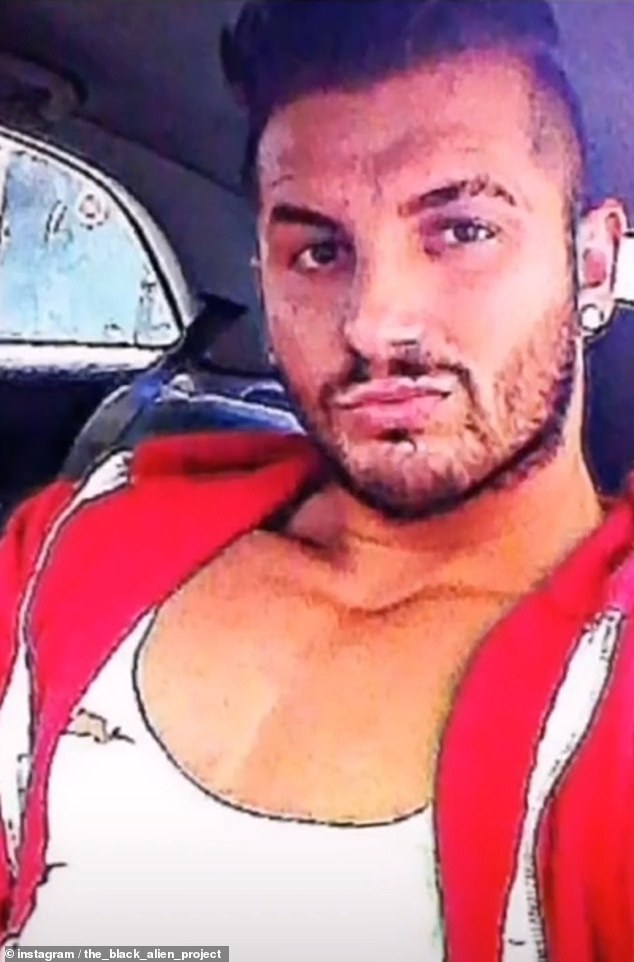 The body modification enthusiast before he started turning his body into a ‘Black Alien’. Anthony said he is only 44 percent on track

He previously told the Club 113 podcast: I can’t find a job, there are a lot of negative things. It can be positive because it makes you feel better, but you should know that there is also a dark side.

Despite undergoing a number of surgical procedures — not least to split his tongue in half and remove his ears — Loffredo revealed he’s still “44 percent” toward his goal of becoming a “black alien.” ‘ to become.

Loffredo has had surgery on a hole in the skin under his lower lip. He often posts images to Instagram of himself sticking his forked tongue through the hole. 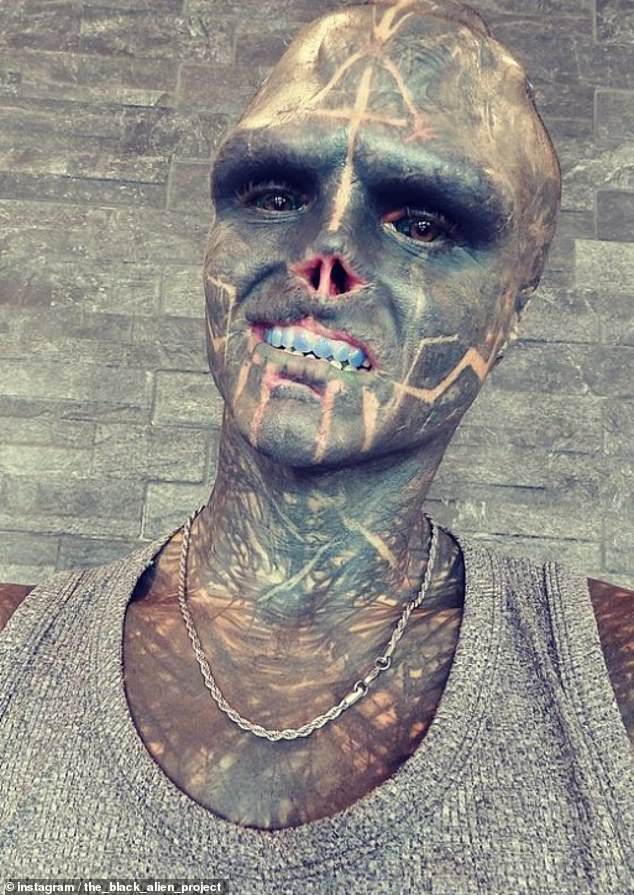 Anthony has admitted that he’s had a hard time finding work because of his extreme looks, but he’s not giving up

He has also had numerous implants placed under his skin, which is tattooed almost completely black.

In an earlier Instagram post, he had hinted at splitting his penis in half, to which one social media user replied, “I knew you were stupid…but that much?”

Last year, Loffredo revealed that he had surgery in Mexico to cut off his two fingers to make his hand resemble a claw.

Graphics and video footage showed Loffredo lying on an operating table surrounded by surgeons as he raised his hand to gaze in awe at his new “claw.”

In July, Loffredo revealed he’s preparing to also remove two fingers from his right hand so he can get matching “claws.” 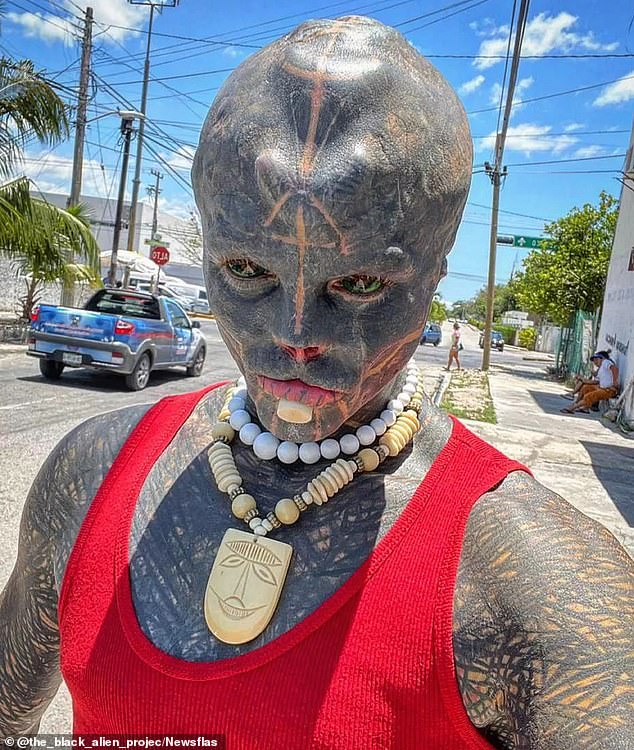 The Frenchman likes to document his journey to change his body on Instagram, where he shows off his tattoo and extreme looks

He wrote on Instagram: ‘On the other side of the world to continue my project, the procedure is going well, another dream just come true. Thank you for doing your top job, thank you Mexico from my heart. 34 percent load.”

One wrote, ‘Oh my God, you did it. I didn’t believe it, but it’s true. I hope your body will adjust.’

Others were less supportive, as one user wrote, “Flat contempt for those unlucky enough to have lost limbs and are looking for ways to function as the human body should.” 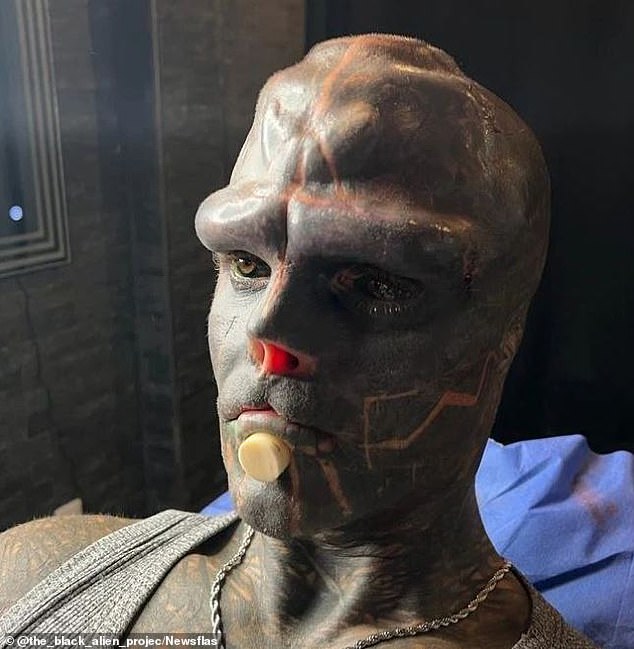 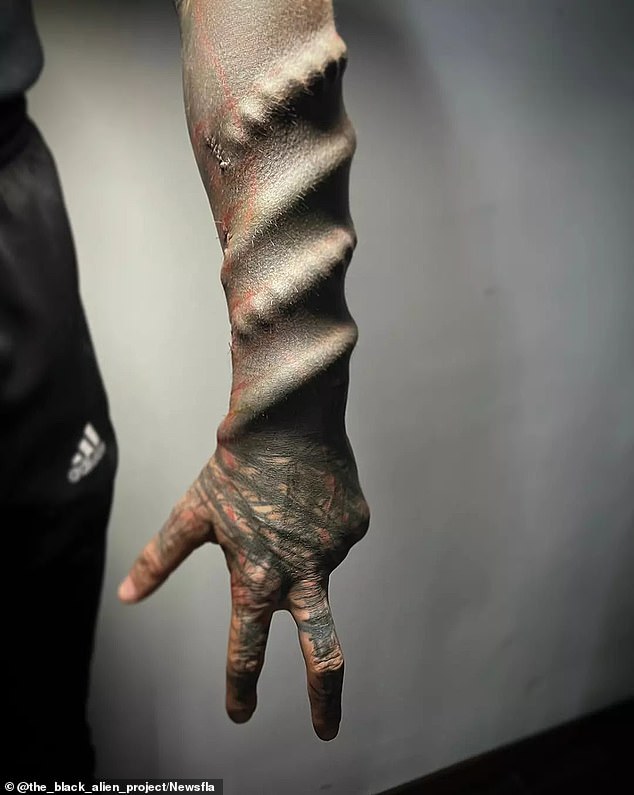 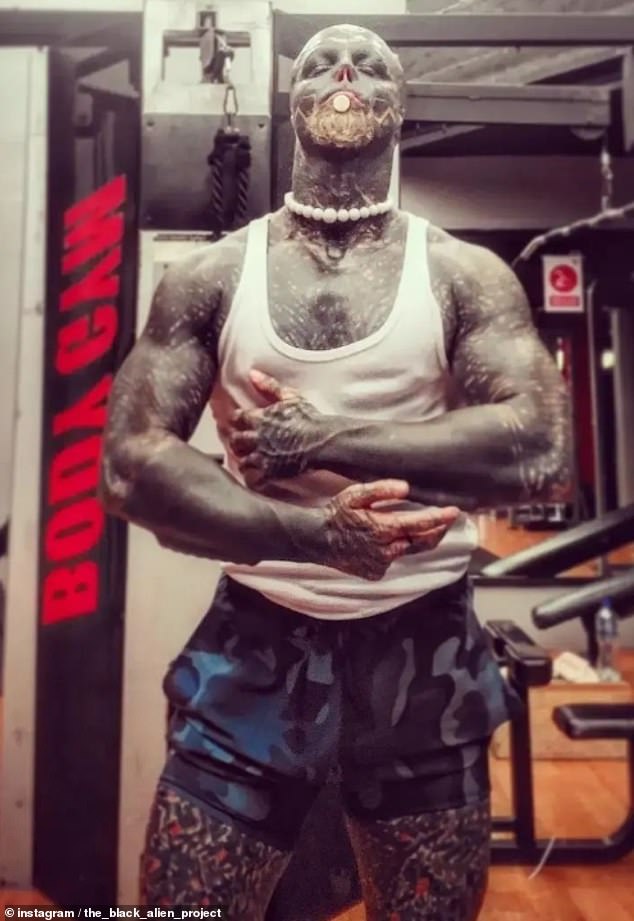 Another wrote, “You’ll end up 100 percent regretting this.”

One user said, ‘This is disturbing and fascinating at the same time. I don’t think I could do this, but I’m keeping my fingers crossed that you made your dream come true.’

The latest transformative procedure comes after Loffredo had his nose and upper lip removed. He later confessed that he now has difficulty speaking.

Last year he had his nose removed in Spain because the procedure is illegal in France.

In addition to piercings and tattoos, body modifications that result in injury are illegal in many European countries.

As such, Loffredo did not specify exactly where, when or by whom his nose and upper lip were removed when speaking about the procedures in a live Q&A session on Instagram.

Loffredo admitted he’s had trouble speaking since having his top lip removed, but this doesn’t seem to have dampened his enthusiasm for body modification.

He said he dreams of completely removing his skin and replacing it with metal and named his arms, legs and fingers, along with the back of his head, as the next parts of his body he wants modified.

Speaking to the French newspaper Midi Libre in 2017, Loffredo said he was “passionate about mutations and transformations of the human body” from an early age.

While working as a security guard in his twenties, he realized he wasn’t living the way he wanted to.

“I stopped everything at 24 and left for Australia,” Loffredo, who now lives in Montpellier, France, according to his Instagram, told the newspaper.

“It has become normal, even subconsciously, to constantly think about my plans [for body modification] for the next few months,” The Mirror reported Loffredo said.

The striking-looking individual said he loved “putting himself in the shoes of a scary character.”

“I often settle down and play a role, especially in the dark streets at night,” he said.

‘I investigate the contrast between the role I play and myself.’