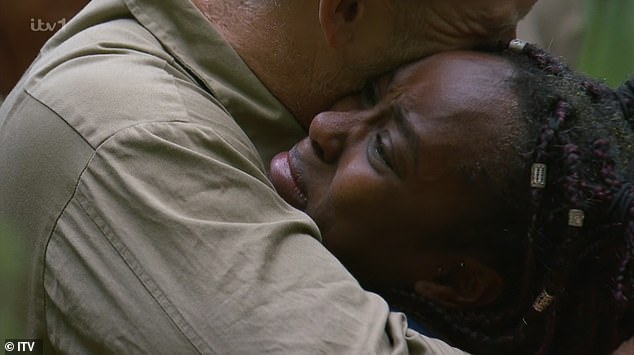 I’m A Celebrity 2022: Scarlette Douglas breaks down in tears as she is announced as the SECOND star to be kicked out of jungle camp

Scarlette Douglas was the second campmate to be kicked out of the I’m A Celebrity…Get Me Out of Here camp during the Sunday episode of the show.

A Place In The Sun presenter Scarlette, 35, burst into tears after the news was announced, prompting her fellow cast members to comfort her.

On the way to the jungle, series hosts Ant McPartlin and Declan Donnelly told that campmates Scarlette and comedian Babatúndé Aléshé were in the bottom two after the public cast their vote.

Farewell: Scarlette Douglas was the second campmate to be kicked out of the I’m A Celebrity…Get Me Out of Here camp during the show’s Sunday episode

During her exit chat with Ant and Dec, she said, “I’m absolutely gutted I’m not even going to lie about it.

“I know some people wanted to leave and I was like ‘I’m not ready to go yet.’

“I wanted to stay as long as possible because those people are amazing and the jungle is incredible.”

Reflecting on her jungle journey with a glass of champagne, Scarlette – who received a VIP experience alongside Boy George when entering the jungle and later took on the role of camp chief – explained that she is a “team player.”

The screen star added that she would like Celebrity Gogglebox star Babatúndé Aléshé to be crowned King of the Jungle.

She said, “Besides BG’s snoring, [the VIP experience] was fantastic. I really enjoyed it and I felt like I was in it right away.

‘I was a bit of a shouter! If you don’t know what was in it but then I thought “This is the first trial, you just have to get a grip on it”.

“There was a point when there was a spider in the RV and I was gone, I screamed. But there was another one and I helped Mike [Tindall] Throw it out!’

She continued, “I’m a team player and I love staying with it. My mother is of course Jamaican, and Charlene is also a Jamaican mother. kitchen!”

‘It does get difficult, especially when people don’t really know how to cook!

“I miss them already. It’s so hard, but me and Baba really had a sibling bond, so he has to do it for the two of us now!”

Prince William opens Earthshot Prize Awards – from space: ‘We Can Change the Future’