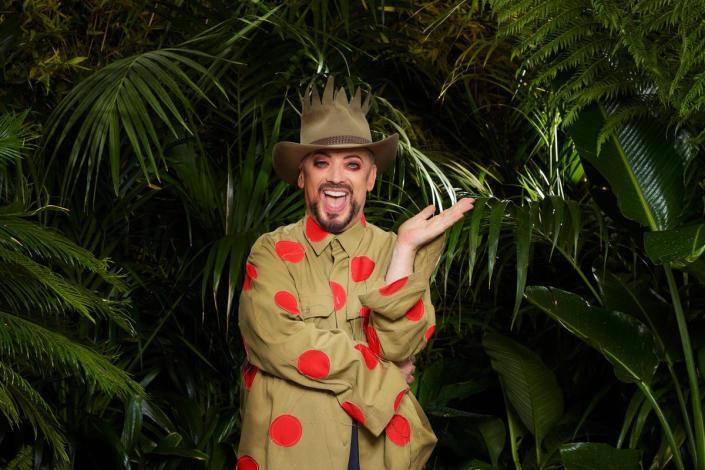 I’m a celebrity… Get me out of here! star Scarlette Douglas has spoken about her confrontation with Boy George in camp over his 2008 prison sentence.

The A place in the sun presenter was the second contestant eliminated from camp on Sunday night’s (November 20) show, following Loose WomenCharlene White on Friday (November 18).

Appears on Good morning Great Britain on Monday (Nov. 21), Douglas was asked about a particularly awkward moment at camp when she questioned the Culture Club singer about his trial.

In 2008, the singer was convicted of assault and false imprisonment after chaining a man to his wall. Boy George pleaded not guilty at the time, claiming in court that he had handcuffed the man because he wanted to track down stolen photos from his laptop.

When Douglas mentioned the incident in the jungle, Boy George retorted that it was “not true” and that parts of the story were “folklore”, before calling her comments “inappropriate”.

Douglas told the GMB hosts that she “really didn’t know the details of the case”, but that the musician had “pretty much just closed the case”.

“I found out something new about Mr. BG that I didn’t know before,” she explained.

Douglas brought up the subject in the jungle after Boy George said that people should take what they read in the paper with “a grain of salt”.

She asked Boy George, “What happened to you, BG, and a man with handcuffs and a radiator?”

“That’s not true,” he shot back, as Douglas clarified, “Oh, I don’t know what the story is [is]I just heard radiator, handcuffs.”

“No radiators. Handcuffs is true, but the radiator piece was false, but thanks for bringing it up,” he said, laughing.

Douglas apologized, saying “I’m sorry because I was like, I wouldn’t be surprised if that was a fake story”, while Boy George said the case had become “folklore”.

In the Bush Telegraph he said: “Scarlette spoke shamelessly about my lawsuit. I actually thought it was inappropriate what she did. I thought she shouldn’t have said what she said to me. And I thought I handled it really well because it’s a big pain point for me when people say things like that.

When Boy George said he was going to prison, Douglas seemed genuinely shocked and repeated, “You went to prison? I did not know.”

However, viewers on social media were quick to point out that the “Karma Chameleon” singer had let Matt Hancock talk about his own past controversies.

“I measure Boy George’s double standard when I am held accountable for his own abhorrent actions,” one commenter wrote.

In 2017, Boy George – who is now sober – reflected on the incident as he performed Piers Morgan’s Life Stories.

“I sent myself to prison,” he said. “I told the police why I did what I did. I had a psychotic episode. I was a drug addict so I can’t say my reasons for doing it were in any way grounded. But I told the truth. I always denied that I had hit that man.”

I’m a celebrity… Get me out of here! continues tonight at 9.15pm on ITV.