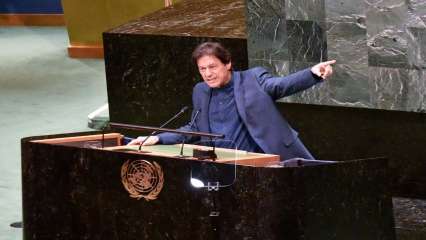 Pakistani Prime Minister Imran Khan is due to address the 76th United Nations General Assembly (UNGA) virtually today in New York. World leaders are in New York to be part of the UNGA where they will deliver their respective speeches. However, for Pakistan, Shehryar Khan Afridi will represent the country instead of Imran Khan.

The Taliban who have taken over the reins of Afghanistan are also seeking to enter the UNGA for the first time.

Shehryar Afridi, chairman of the Pakistani parliamentary committee on Kashmir, was sent to the UNGA by Prime Minister Imran Khan to tell the world what allegedly happened in Jammu and Kashmir. The idea behind Afridi’s visit to UNGA would be to “raise awareness” in Kashmir.

Meanwhile, Prime Minister Imran Khan will present the country’s perspective on key regional and global issues, in particular on Kashmir and the situation in Afghanistan, in his political address to the United Nations General Assembly (UNGA) , according to official sources. Pakistan’s Permanent Representative to the UN Ambassador Munir Akram briefed on Prime Minister Khan’s virtual UNGA address to US state media.

Foreign Ministry sources told media that Imran Khan would speak about alleged human rights violations in Kashmir, which Pakistan claims to have documented in a recent dossier and which he says were shared with the UN. India, however, maintained that Jammu and Kashmir “was, is and always will be” an integral part of the country.

Pakistani Prime Minister Imran Khan’s speech will revolve around Afghanistan, trying to draw the world’s attention to the urgency of stabilizing the torn country, Munir Akram informed. Earlier, Imran Khan said his government had entered into negotiations with the Taliban to form an inclusive government in Afghanistan.

ALSO READ  How the new US travel rules affect various countries, including India

The theme of this year’s UNGA General Debate is “Building Resilience” through the hope of recovering from COVID-19, to rebuild sustainably, to meet the needs of the planet, to respect the rights of people and revitalize the United Nations.