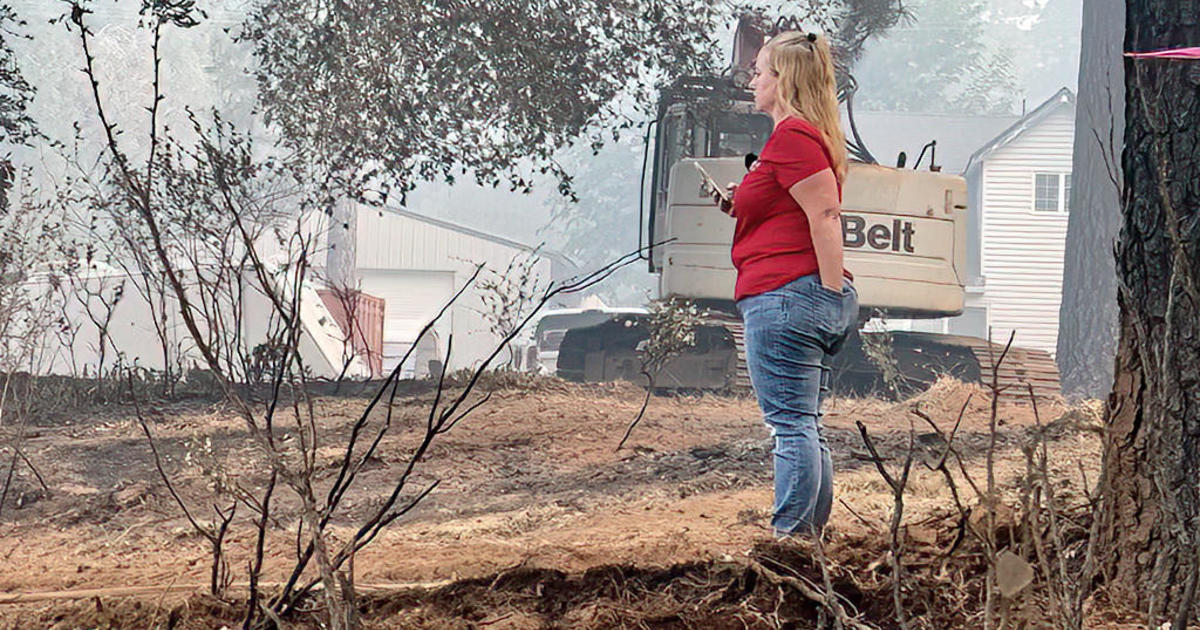 FORESTHILL (KPIX) — The Mosquito Fire, California’s biggest wildfire of the year, continues to rage in the Sierra Nevada foothills. Since it came to life on September 6, it has only been contained by 20% and more than 11,000 people have been forced to flee their homes.

Jamie Knutsen leaves her family’s temporary home in Roseville and returns to her home in Foresthill, Placer County, for the first time in 10 days.

Knutsen and her family were forced to evacuate when the Mosquito Fire engulfed the canyon through their property.

As Knutsen made the 45-minute ride, she mentally prepared for the worst.

“It’s like having butterflies in my stomach, but they’re not the right kind,” Knutsen said as she cruised the smoke-shrouded terrain.

Knutsen knows that the fire has already destroyed part of her community.

The mosquito fire continues to burn through the city she has called home for most of her life.

“It feels like a family here and I don’t want to lose that,” said Knutsen.

As the mother of two approaches her property, Foresthill appears to be a ghost town with only firefighters surrounding the vacant buildings on the usually busy Foresthill Road.

Knutsen pulls up her driveway and breathes a sigh of relief.

Shocked, her 20-year-old family’s home, which she shares with her husband, two children and her mother, is still standing.

Since Friday, the Mosquito Fire has scorched nearly 70,000 acres.

“So there you go, that’s how close it came to our house,” Knutsen said as she walked through her backyard. “That’s where it stopped.”

The firing line is only a few meters from the Knutsen family home.

“This is the only house they’ve ever known,” Knutsen said. “There are a lot of memories here and the idea of ​​it being lost is just crazy.”

Cal Fire reports that as of Friday afternoon, 13 buildings have been damaged and 73 destroyed.

While the Knutsen’s home remains intact, it’s sadly not the same for some of its neighbors.

“There are people who have lost their homes and I’m one of the lucky ones. It just makes me feel bad,” Knutsen said, holding back his tears.

The scorched landscape around her house is like something out of a war zone. Knutsen remembered what her backyard was like a week ago.

“I will come out here often. It’s my quiet space, it’s a beautiful view,” Knutsen said. “It means more to me now than it did last week. It is definitely my real home and I never want to leave it.”

Just as Knutsen was about to return to Roseville, a truck arrived carrying one of the firefighters who had saved her home from the flames earlier in the week.

“Thank you very much! Can I give you a hug”, Knutsen asked the fireman who accepted it with a smile.

When she leaves, Knutsen hopes she will soon bring her family back home for good.

“It’s hard because you don’t really appreciate what you have until you don’t have it,” she said. “So I hope we can go home in a week or so. We do not know.’

Amanda Starrantino joined KPIX 5 in October 2021. She is the co-anchor of the TBEN Bay Area morning and afternoon broadcasts.