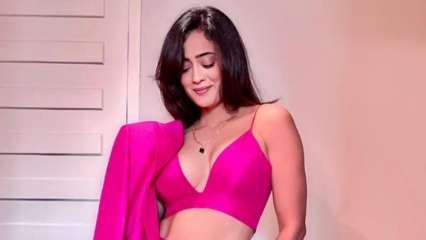 Shweta Tiwari earlier this month returned from the filming of ‘Khatron Ke Khiladi 11’ which was set in Cape Town, South Africa. The actor set the internet on fire with her toned body and envious abs that she worked on before the show.

On Thursday (July 22), Shweta broke the internet again with photos in a sexy pantsuit. The “Kausautii Zindagii Kay” actress shared a series of photos in a fuchsia pink pantsuit. She paired it with a hot bralette in the same color. Shilpa accessorized her look with a pendant and high heeled sandals. Shweta’s stunning costume is from fashion label Ranbir Mukherjee.

She kept her makeup minimal with pink lips and eyes and a shade of blush. She completed her look with her gorgeous locks flowing over her shoulders.

Fans also went gaga over the photos of Shweta and complimented her appearance. “This lady still has the value of making a huge comeback in TV shows as a leader,” one user wrote while another commented, “Stunner”. A third user wrote: “You are my favorite actor”, while a fourth commented: “Chic and elegant beauty”.

While in Cape Town, Shweta also made headlines due to her very public argument with her ex-husband and actor Abhinav Kohli. Abhinav had accused Shweta of ditching their son Reyaansh in a Mumbai hotel with no one to care for him while she traveled abroad for the stunt-based reality show. Shweta, however, denied these claims and said Reyaansh was fully taken care of. Shweta even shared a video (now deleted) that showed how Abhinav physically assaulted her and their son.

Nawazuddin Siddiqui and his wife Aliya will make their first trip after the tinkering, children to accompany