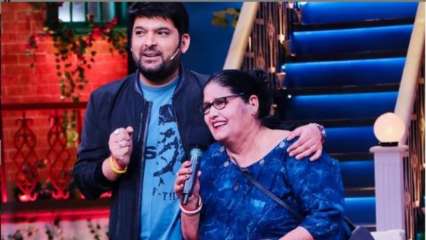 Celebrity comedian Kapil Sharma, who hosts the popular comedy talk show “The Kapil Sharma Show”, has been entertaining fans for several years. His wit and comedic timing, as well as the performances of various comedians, allowed the said show to win the hearts of audiences and topped the charts every time. And now, with Kapil announcing that he’ll be making his Netflix debut soon, love for the actor-comedian has poured in from all sides.

Amid all the appreciation and wishes from fans, Kapil took to his verified Instagram handle on Wednesday to share a few photos of his mother Janak Rani, who turned a year older on January 13. “Kapil captioned the post.

In the first photo, Kapil’s mother, dressed in a traditional pink costume is seen sitting in a chair, smiling for capture. The photo appears to have been taken during celebrations for the first birthday of Kapil’s daughter Anayra.

In the second photo, Kapil is seen kissing his mother on the cheek as her daughter sits on her grandmother’s lap and the latter cuts the birthday cake. It should be noted that Kapil’s daughter Aanyra has her eyes set on the cake as the mother-son duo share an emotional moment.

Look at the pictures here:

“I had already filed a complaint. Today, I personally asked CP for a full investigation. I thank the Mumbai police. White collar crime is on the rise and people like us are being duped. I’m glad the police arrested him (Chhabria), ”Kapil Sharma told reporters.

Earlier, on January 5, the comedian-actor announced that he would be making his Netflix debut soon.

A video ad has been posted by Netflix India in which Kapil introduces himself and tries to pronounce ‘auspicious’. He then talks about being part of the India-based streaming platform, making Hindi his main language.

‘Stand By Me Doraemon 2’: The Nobita-Shizuka Trend Around The Globe, Here’s Why