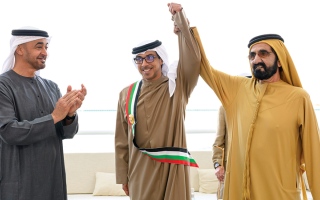 His Highness said: “In the presence of my brother, the President of the State, may God protect him, we honored today my brother, Sheikh Mansour bin Zayed, for his exceptional efforts in serving the United Arab Emirates. Support for his fellow citizens.

His Highness added: “He supervises the Central Bank, which regulates the largest banking sector in the region..and follows up on government policies through the Ministerial Development Council..and manages the Emirates Investment Authority with assets exceeding 300 billion dirhams..and follows up on all the files of the sovereign presidency assigned to him by the leadership.. Mansour is a man A state…and a first-class economist.

His Highness Sheikh Mohammed bin Rashid Al Maktoum said: “The last of the files that my brother Sheikh Mansour took over… the file of employing citizens… who was able to employ 28 thousand citizens in just one year… and raised their percentage in the private sector by 70% within months… Mansour is one Zayed’s great extensions… and one of the great pillars of the nation.

Granting His Highness Sheikh Mansour bin Zayed Al Nahyan the scarf comes in appreciation of His Highness for the contributions and achievements that have been made under his supervision and leadership of a number of development files and sectors in the UAE, as His Highness supervises the executive and development files and new policies in the federal government since 2009, through his position as Vice Chairman of the Council Ministers and Chairman of the Ministerial Council for Development.

His Highness contributed to the establishment and management of the Emirates Investment Authority, which oversees the management and investment of all federal government assets, and comes in seventh place in Arab sovereign funds, with assets under management amounting to 322 billion dirhams.

His Highness, during the presidency of the Council for the Competitiveness of Emirati Cadres, achieved an achievement, as the percentage of citizens in the private sector was raised to 70% within one year, and 28,000 citizens were localized in the first year of the program.

His Highness Sheikh Mansour bin Zayed Al Nahyan also supervises many sovereign national files, through his position as Minister of the Presidential Court, especially those related to serving citizens, and following up on the implementation of all presidential initiatives in the country.

He accompanied His Highness Sheikh Mansour bin Zayed Al Nahyan, the late Sheikh Zayed bin Sultan Al Nahyan, may God rest his soul, and learned from his wisdom, and learned in his unique school of leadership and management, from an early age, through his presidency of the office of the founder, Sheikh Zayed since 1997 Until his death, may God have mercy on him, in November 2004.

ALSO READ  An hour on WhatsApp costs a man 70,000 dirhams

His Highness also worked with the late Sheikh Khalifa bin Zayed Al Nahyan, may God have mercy on him, until his death in 2022, through his position as Minister of the Ministry of Presidential Affairs since 2004 (currently the Presidential Court), and the ministry during this period was a model of efficiency and excellence in providing the best support and service. to the head of state.

His Highness Sheikh Mansour bin Zayed Al Nahyan has held the position of Deputy Prime Minister since 2009. His Highness chairs the boards of directors of several important federal institutions, as he assumed the presidency of the Emirates Investment Authority during 2007, and the Central Bank of the United Arab Emirates during 2020.

His Highness Sheikh Mansour bin Zayed Al Nahyan presides over the Ministerial Council for Development, which constitutes one of the most important councils supporting and assisting the Council of Ministers. During the year 2022, the Ministerial Council for Development held a number of meetings, which discussed and approved more than 313 decisions and projects in various fields of government work.

The Council is concerned with studying appropriate solutions to improve the level of services for citizens, especially with regard to health, education, housing, roads, various means of transportation, electricity, water and means of communication, and taking the necessary measures in this regard while following up on implementation, making the necessary contacts with the competent authorities in the Emirates, and consulting with them in the field of Terms of reference application.

His Highness also chairs the Board of Directors of the Abu Dhabi Agriculture and Food Safety Authority, which is the local authority specialized in agriculture, food safety, food security and biosecurity in the Emirate of Abu Dhabi. Food, which is the body responsible for preparing plans, programs and activities in the field of agriculture, food safety and food security in the Emirate of Abu Dhabi.

In the framework of his support for education, His Highness supervises the Scholarships Office, which was established in 1999, which is based on selecting outstanding Emirati students in their academic career, and sending them on scholarships to prestigious local and international universities. His Highness also presides over the Board of Trustees of the Khalifa Educational Award, which was established in 2007. It is based on the advancement of the Emirati and Arab educational work, in all its stages, by honoring the distinguished and creative people in various educational fields.

His Highness also gives great importance to youth, encouraging them to excel, excel and innovate, and opening up fields of work for them in various fields of national action.

His Highness cares about the Emirati heritage, and is keen to revive this heritage in the conscience of young people and youth, in order to enhance their identity and national belonging, especially with regard to horse racing. Authentic, promoting the cultural heritage and heritage of fathers and grandfathers, introducing generations in the country to the nobility of their past, and the values ​​of originality and national identity.

His Highness also supports camel races, is keen to attend their competitions, and meets their owners and subjects on an ongoing and continuous basis, considering camel racing as one of the means of reviving the authentic heritage, preserving the ancient traditions of the people of the UAE, and preserving the heritage of the ancestors.

The leadership of His Highness Sheikh Mansour bin Zayed Al Nahyan, the Emirates Investment Authority, resulted in the achievement of many achievements, which contributed to enhancing the investments of the agency in the country and abroad. The Emirates Investment Authority is the only sovereign fund of the federal government in the United Arab Emirates. The Authority was established in 2007, and since then it has been looking for distinct investment opportunities at the local, regional and international levels, with a focus on investing in asset classes that contribute to the promotion and diversification of the UAE economy.

The Emirates Investment Authority plays a vital role in consolidating the UAE’s prestigious economic position and its pioneering development path. Since its establishment in 2007, it has been able to build and develop a federal investment institution that assumes responsibility for the assets allocated to it by the federal government. The Emirates Investment Authority manages eight strategic assets in more than 15 countries.

And in 2022, TBEN Middle East confirmed that the Emirates Investment Authority ranks seventh among the largest Arab sovereign wealth funds, with assets under management worth about 322 billion dirhams.

His Highness Sheikh Mansour bin Zayed Al Nahyan harnesses the efforts of the agency through a multi-pronged strategy, with the aim of enhancing the volume of investment in the coming years, and contributing effectively to the country’s development process during the course of the next 50 years.

Under the leadership of His Highness, the agency looks forward to continuing to achieve high financial results, securing long-term and sustainable gains and returns for the UAE in accordance with international best practices, working to double the size of the agency’s assets, and ensuring more compatibility with the goals of the country’s national agenda, in addition to investing in new sectors that will Achieve additional revenue.

His Highness Sheikh Mansour bin Zayed Al Nahyan, through his leadership of the UAE Central Bank, was able to achieve a wide range of strategic goals, which contributed to supporting the competitiveness, diversification and growth of the financial sector, in line with future economic trends, establishing a strong financial infrastructure built, and promoting the future of financial technology and digital transformation. for the UAE.

Thanks to the wise vision of His Highness, the bank succeeded in contributing strongly to enhancing the monetary and financial stability of the country, by developing the regulatory and supervisory framework for licensed financial institutions, and enhancing confidence in financial services in the country, which established the UAE’s position as one of the most important financial and economic destinations in the region and the world.

Emiratisation is one of the vital files that the UAE leadership attaches great importance to, and based on this importance, His Highness Sheikh Mansour bin Zayed Al Nahyan seeks through the Emirati Cadres Competitiveness Council (NAFES) to achieve many important goals, which include developing the skills of citizens who are job seekers and workers in private sector, raising their competence in the professional specializations they desire, and increasing their participation among the workforce in the private sector.

In addition to the vital files for which His Highness Sheikh Mansour bin Zayed Al Nahyan is responsible at the internal level, His Highness contributed and actively contributes to strengthening the UAE’s international relations, and serving its goals and interests on the regional and global arenas, through his foreign visits and meetings with senior officials in the world. , whether inside or outside the UAE, and important foreign issues that he undertakes as mandated by His Highness the President of the State, especially with regard to economic and development relations.

Vice President of the State:

• “The last of the files that my brother Sheikh Mansour handled… the file of employing citizens… who was able to employ 28 thousand citizens in just one year.”

■ Overseeing executive and development files and new policies in the federal government since 2009, through his position as Deputy Prime Minister and Chairman of the Ministerial Council for Development.

■ Establishing and managing the Emirates Investment Authority, which oversees the management and investment of all federal government assets, and is considered seventh among Arab sovereign funds, with assets under management amounting to 322 billion dirhams.

■ Presiding over the Council for the Competitiveness of Emirati Cadres, whereby the percentage of citizens in the private sector was doubled to 70% within one year, and 28,000 citizens were localized in the first year of the program.

■ Overseeing many sovereign national files through his position as Minister of the Presidential Court in the UAE, especially those related to serving citizens, and following up the implementation of all presidential initiatives in the country.