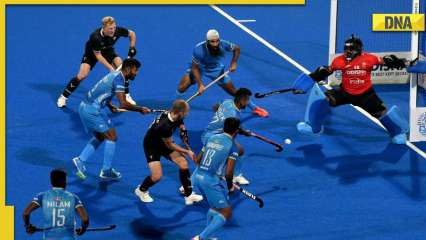 With a place in the quarter-finals on the line, India will take on New Zealand on Sunday in a crucial crossover match at the 2023 FIH Men’s Hockey World Cup. Led by Harmanpreet Singh, India finished second in Pool D, narrowly behind table top players England who secured their place in the quarter-finals due to a superior goal difference. This match promises to be an exciting and intense affair as both teams battle for a spot in the next round.

As it is a match of everything, Team India will have to be sharp and bring their A-game to surpass the Kiwis. Midfielder Hardik Singh’s injury has been a major setback for the team, but the Men in Blue don’t have the luxury of time to look back and mourn.

Midfielders Shamsher Singh and Akashdeep Singh were the goalscorers in the previous game and all eyes will be on them again. Under coach Graham Reid, India will need to step up their game when it comes to converting penalty corners, an area that was lacking in the previous game.

Meanwhile, New Zealand finished third in Pool C and is significantly lower than India in the world rankings. At number 6, India is well ahead of number 12 New Zealand. It may seem like an easy challenge on paper, but India will not want to take anything for granted in a tournament as prestigious as the World Cup. India will have to be prepared for a tough fight against the Kiwis, who have the potential to surprise and upset the higher-ranked team.

The winner of the match between India and New Zealand will face Belgium in the quarterfinals, setting the stage for an exciting showdown.

Here are the live streaming details:

The crossover match between India and New Zealand for the Hockey World Cup will take place on Sunday, January 22.

The Cross-Over match between India and New Zealand Hockey World Cup kicks off at 7:00 PM (IST).

Live streaming of the India vs New Zealand Hockey World Cup Cross-Over match will be available on Star Sports Network.

ALSO READ  India vs New Zealand: Big blow to India as THIS star player is ruled out of T20 series due to injury

Live streaming of the India vs New Zealand Hockey World Cup Cross-Over match will be available on the Disney+Hotstar app.

Kareem Abdul-Jabbar scores with the Milwaukee Bucks, as you can see in the numbers