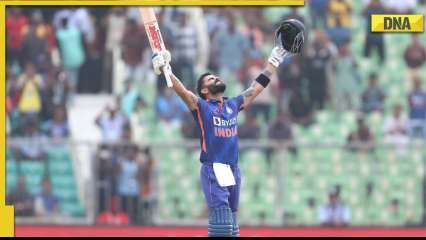 Virat Kohli achieved his second century of the year in India’s third one-day international match against Sri Lanka at Greenfield International Stadium in Thiruvananthapuram on Sunday. His impressive performance was met with thunderous applause from the crowd as he hit the milestone in style, crushing Sri Lankan bowlers all over the park.

This was Kohli’s third century in his last four ODI innings, a remarkable achievement. After a three-year drought, Kohli marked his first ODI century on India’s tour to Bangladesh in December 2022, and followed it up with a century in the first ODI against Sri Lanka at Guwahati. This impressive streak of centuries has cemented Kohli’s position as one of the greatest hitters of all time.

Virat Kohli strode to the crease in the 17th over after the departure of captain Rohit Sharma who had scored a staggering 42 points. Kohli then formed a formidable 131-run partnership with Shubman Gill for the second wicket. In the 43rd over, Kohli reached the century mark, having taken just 85 balls to reach the three-digit mark.

Virat Kohli’s 46th ODI century has him just three off Sachin Tendulkar’s record-breaking tally of 49 centuries in the format.

AT HOME IN ODIs FOR MOST CENTURIES