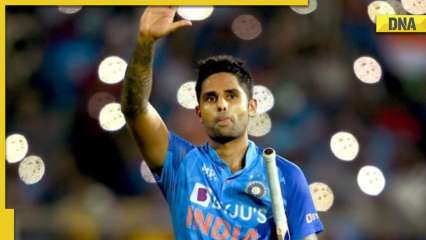 Suryakumar Yadav’s unbeaten century, 112 runs off 51 balls and a powerful performance from the bowlers gave India an impressive 2-1 victory over Sri Lanka by 91 runs in the third and final T20I on Saturday (January 7).

Suryakumar Yadav’s impeccable performance has taken India to a massive total of 228/5 in 20 overs. Apart from Suryakumar, Shubman Gill played a decent knock (46 for 36) while Rahul Tripathi gave India some quick runs in the Power play with his 35 for 16.

Chasing a huge total, the Sri Lankan side were under immense pressure, but openers Pathum Nissanka (15) and Kusal Mendis (23) gave Sri Lanka a solid 44-run start with a flurry of strikes against Indian fast bowlers.

With pacemakers going for runs, India skipper Hardik Pandya introduced spin and Axar Patel took Mendis’ wicket in his first ever over. In the next round, Arshdeep Singh knocked out Nissanka while Pandya got Avishka Fernando (1). Leg spinner Yuzuvendra Chahal, who was not at his best in the series, showed better control with the ball and got the reward by choosing the wicket of Charith Asalanka (19).

People like Dasun Shanaka (23) and Dhananjaya de Silva (22) tried, but the task was too big for them. Arshdeep, who made a comeback after a dreadful last game, took two wickets in the 17th over, including the all-important Dasun Shanaka, who ran for 137-10 to secure a 91-run win for India.

Arshdeep was the most successful bowler for India 3-20, while Yuzvendra Chahal (2-30), Hardik Pandya (2-30) and Umran Malik (2-31) took two wickets each and Axar Patel also took one wicket.

Earlier, India, who won the toss and opted to bat first, lost the first wicket early on when Ishan Kishan jabbed out and scooted behind a swinging bouncing pitch by Madushanka in the very first over of the innings.

Kishan’s opening partner Shubman Gill also struggled to open his account for the first nine balls, before beating Madushanka for six and four in back-to-back deliveries to get things going.

Rahul Tripathi, who re-entered batting at number 3, showed his attack intent by hitting Theekshana three fours in an over. He hit five fours and two sixes in his blistering innings of 35 off 16 balls to bring much needed impetus to Indian innings. He got out, sweetly sent the ball to the third man and found the fielder in the 6th over.

Nevertheless, Tripathi’s innings meant India finished the Power play at 53/2, which was good after they lost Ishan in the first over as Shubman Gill batted steadily.

But it was Suryakumar Yadav, who wasted little time getting off the block and playing with Sri Lankan bowlers, hitting them all over the park. The classy batsman got to work with a four and a six off Karunaratne, drove over half way and executed the whip-pull. He also cracks a short pass from Hasaranga past the point for a four.

Theekshana slipped in quietly, but the visitors couldn’t keep Surya quiet for long. A four coming down the court to Karunaratne, followed by a typical first over a fine leg for a six for Suryakumar helped India past 100 in the 11th over, and also brought forward its half-century score of 29 deliveries with Gill, watching the ball cross the boundary line from the other side.

A boundary over extra cover brought Suryakumar’s 14th T20I half-century in just 26 balls. It was also Surya’s ninth fifty-plus score (including a century) in his last 15 innings as India were 131/2 after 13 overs.

After watching Suryakumar’s carnage from the other side, Shubman Gill also decided to free his arms and hit Hasaranga for an 84m six over mid-wicket. However, the spinner had the last laugh as he tricked Gill through length and bowled him, leaving India at 163-3 after 14.4 overs.

Once Gill got out, the podium was set for finisher Hardik Pandya, but the skipper was unable to take advantage and got out for just 4 runs. Next batter Deepak Hooda started his innings with a four, but was soon out on a cutter from Madushanka.

But Suryakumar was unstoppable, who hit his third T20I century in 45 balls, which was the second fastest half century by an Indian in the shortest form of the game after Rohit Sharma, who achieved the milestone in just 35 deliveries against Sri Lanka also in 2017.

On the other hand, Axar Patel (21 not out on 9) picked up where he left off in the previous game and made a small cameo towards the end. With both Suryakumar and Axar batting, India scored 28 runs in the last two overs to post a total of 228/5 in 20 overs.